Borderlands 3’s Halloween Update, The Blood Harvest is the game’s first free content. The trailer for the game has been revealed which is available on YouTube and also the Halloween event goes live this week. To play this, the player must have played the game’s story mode in order to unlock Sanctuary III. With this update, you will have a giant lizard whose name is Maurice will be on your ship. According to creative director Paul Sage, he will be your guide for all of the Borderlands 3’s seasonal content.

This Halloween event will be available during the Bloody Harvest which will be taking place on a planet called Heck. For those who want to go here, the player must complete a quest that is provided by Maurice. On arriving at this planet, you will be greeted with hordes of zombified Maliwan soldiers, Ratch, and fire-breathing Rakk-o’-Lanterns. After all this, finally, the final boss who is named Captain Haunt will be left. His looks pretty cool and his head is a glowing skull. 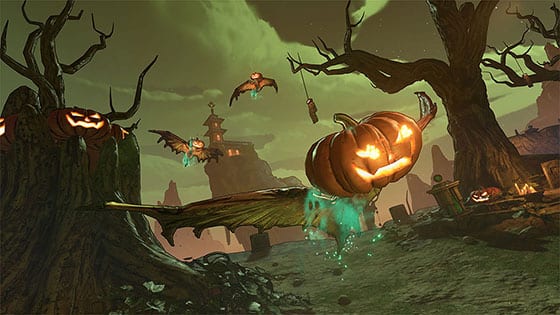 With this event, a new type of ‘terror’ debuff will be introduced. This can be used by the haunted enemies to blur your vision and screw with your aim. This sounds quite bad but it will be beneficial for you when you use the new gun. When you are the new Anointed weapons that can be dropped by enemies on Heck, terror can be turned to your benefit.

There is also a new Legendary shotgun coming with this that is called Fearmonger. You will get seasonal cosmetics for each of the four Vault Hunter classes in the game. Those are rewarded for completing a new set of Bloody Harvest-exclusive challenges. As for the event’s update, Blood Harvest Will be available on 24 October 2019 and it will end km 5th December of this year. So get ready to gather some more stuff in Borderlands 3.