Dragon Ball Super Brings Back “Merus” to Life in the New 67th Chapter! The Hero is Back!

Dragon Ball Super Brings Back “Merus” to Life in the New 67th Chapter! The Hero is Back!

On 20th December 2020, Dragon Ball Super came back with a new chapter featuring the heroes celebrating the defeat of this year’s major villain “Moro” in the last month’s issue. Thus, it’s due time, and the manga is on the way to wrap the arc before the holidays. Apart from lots of moments of Goku and Vegeta building up their strength in defeating the mystical planet eater “Moro” throughout the arc, there was another new hero who managed to steal the spotlight several times. And that hero was none other than the “Angel in disguise” and part of the Galactic Patrol Squad, “Merus” who quite surprised the fans and kept them thinking about his true identity until it was further revealed.

Unfortunately, Merus ceased to exist during a fight with Moro as Merus used his angelic powers to take the upper hand in his favor. The move was not seen appropriate by the angelic world and thus Merus vanished on the occasion immediately.

Well, enough for the sad news, because, reports from the brand new chapter 67 which was released recently on December 20, 2020, show the hero making his return in a new form of life. So if you haven’t kept up with the manga, here we have covered exactly what happened

Chapter 67- What Happened and How Merus came back to life? 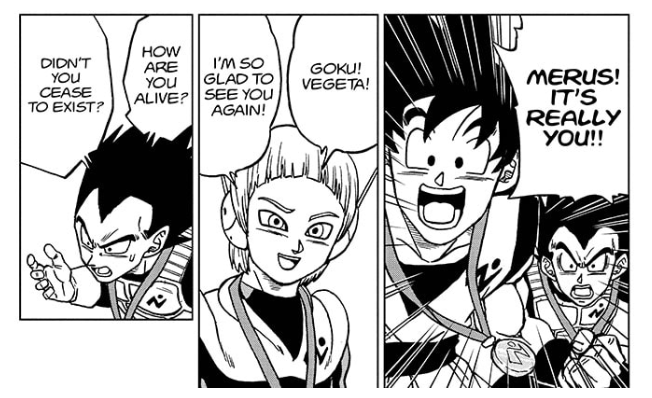 So, the first pages of the new chapter saw our heroes celebrating their victory after a long and hectic battle with the planet eater Moro. The arc had the heroes go through a lot of ups and downs to almost losing. But still, after some help from here and there, Goku managed to clear Moro off the planet’s face.

We also saw Vegeta yelling and asking Goku about the powers he received at the last moment which helped him gain an upper hand over the mystical Moro and plus, Uub, the reincarnation of evil kid Buu makes another appearance in Dragon Super Manga. We saw him talking to the Great Lord of Lords and Uub showed no signs of acknowledging the strength he posses. Thus, the Great Lord of Lords returns to the Kami’s lookout and switches back into the form of Majin Buu.

In a surprise twist, Merus’s name is announced and Merus makes his way to receive the medal leaving everyone else in a shock. The former angel revealed how he was ceased only “as an angel” temporarily and next we go into a flashback.

In the flashback sequence, we see Grand Priest in a conversation with Beerus and Whis as they acknowledge their mistake of letting Merus go out of hand. Grand Priest finally revealed that he temporarily eradicated Merus from existence but has decided to resurrect him as a mortal. Merus, now unlike the other angels will not have powers and will have a lifespan. Grand Priest also revealed what moved him so much by introducing Supreme Kai in the frame who made the request by willing to sacrifice his own life. Thus, Beerus and Supreme Kai received minor penalties, and Merus was brought back to life.

The arc might be over, but the story continues as we enter a new arc as seen in the ending pages of the latest chapter. From 73 being alive and experimented on to the arrival of Granola. There is a lot to come. Stay tuned for updates on the upcoming arc of Dragon Ball Super titled, “Granola, the survivor arc”.