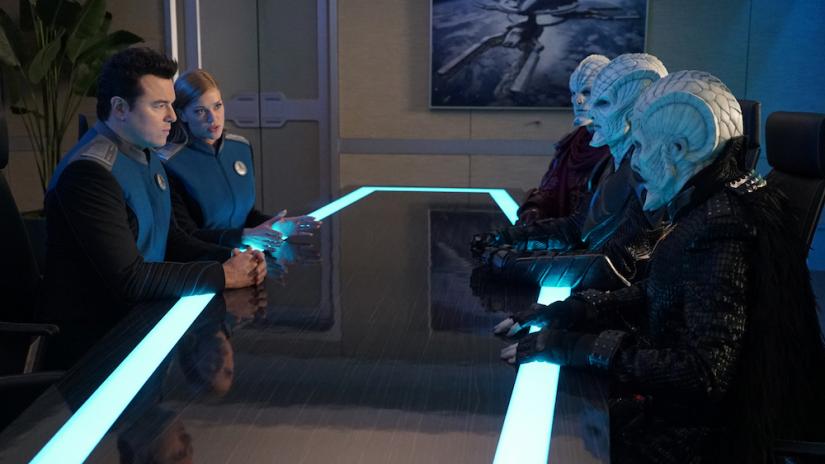 The science fiction comedy-drama series, The Orville is currently in its second season, and fans of the series are already wondering about the possibility of a third season. Well, The Orville Season 2 hasn’t concluded yet, and till now, there is no confirmation on the third season by Fox. The Orville made its debut back in September 2017 and concluded on 7th December 2017, however, back at that time, Fox already renewed the show a month earlier, which is on November. Judging by that, Fox should’ve renewed the show by February of this year, but, till now, there is still no word of The Orville Season 3.

The Orville Season 2’s ratings are also not that impressive and are low compared to that of its first season. According to a report from TV Series Finale, Season 2 is currently averaging a rating of 0.81 in the demographic range of 18-49, and so far, it has managed to get a viewership of 3.35 million.

Compared to that of the first season, its 35% and 23% down. But, because Season 2 is still going on with its 11th episode to air on 21st March, anything can happen. Fox might be taking some time to analyze everything before proceeding, and we have witnessed shows getting renewed with low ratings, so The Orville Season 3 is still possible.

The cast for the upcoming season (if renewed) includes:

If the show is renewed, The Orville Season 3 is expected to release sometime between March-April 2019.

The Orville season 2 has concluded a couple of weeks ago, and fans are curious to know what will happen after this. First of all, the show has not been renewed yet, which is a bit disappointing. It seems like Fox wants to analyze the insights before making the decision.

The data we described above in this article was before the second season completed. But now the second season has completed, and it has even gone worse, which is a matter of concern. Hence, there are 50-50 chances of renewal and cancellation as well, but we are positive about the renewal side.