To say Re: Zero upped the stakes is an understatement. The sheer number of trials and tribulations Subaru has to go through is just too much for anyone to bear. It’s surprising he still finds the resolve to go ahead, despite knowing the pain he brings to himself and others. The 2nd season begins immediately after the end of the 1st season. Having confessed his love to Emilia, Subaru in banter with Petra and Emilia talks about Rem. Only to find out none of them seem to remember her.

The show wastes no time to get to the meat of the issue. In a touching moment, Rem is defeated by the Sin Archbishop of Greed and Gluttony. Similar to how the White Whale wiped out its victims from existence along with their memories, Rem is again gone. While Rem fans might be disappointed with her absence throughout the season, her absence further pushes Subaru.

Having lost his support pillar, Subaru is pushed to the brink of his sanity. There are moments he seems to consider suicide, not as a means to go back to the last point but to end his pain. As a character, what Subaru goes through is tough to watch. On top of that, psychological horror makes things even tougher. Like how each loop worked as unraveling a murder mystery in the 1st season, the 2nd season builds upon that with newer situations and characters. Things have never been this tough. While we never knew anything about the witches and their lore, we get to know more this time around. Which better or for worse puts Subaru in more trouble than he can handle.

The Trials at the Sanctuary reveal a side of Subaru that we hadn’t seen before. We get to see his life on Earth and why he turned out the way he did. The first trial pushes him to confront his past, which brought me to tears. While much of the story is left to be covered in the 2nd part of the 2nd season, Subaru’s character development we’ve got so far is too good. 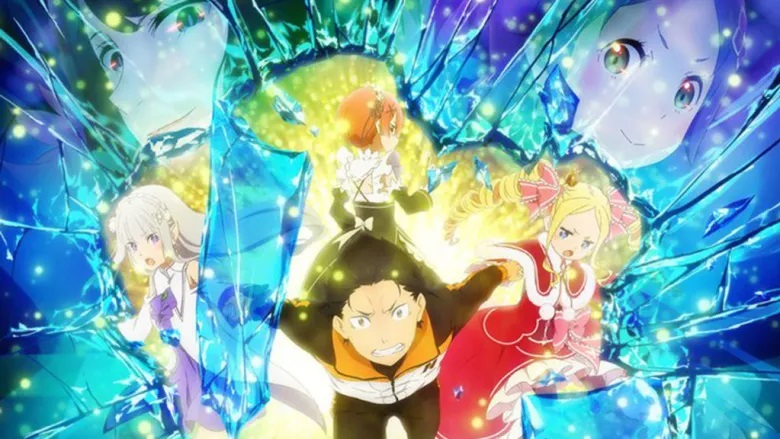 What Re: Zero has done best are the character arcs. None of the characters exist in a bubble or exist only to serve the protagonist. Most of the characters have their own motivations and take actions for themselves (like real people). With the introduction of characters like Garfiel and Echidna, the complexity of situations Subaru is put in increases as each time he makes a decision, the loop often changes for the worse. Though Echidna seems to steal the show, the mystery around her motivations is a pleasant surprise.

The mystery of the world and the hidden motivations of the characters increase the stakes. On top of that, as each time Subaru dies, things get tougher. With the Mansion situation and the impending doom upon the Sanctuary, the show becomes more nail-biting with each passing episode. With Rem’s absence, Emilia gets more screen time, which wasn’t the case in the first season. As seen in the OVA, their past Emilia still haunts her. My biggest problem with Re: Zero has been the lack of Emilia. Despite being the most important character in the story, it’s surprising how little we see her. The entire story revolves around her and her, but we rarely see her character arc. They started showing her side, and how the trials have been mentally affecting her. I hope we get to see more of her in the 2nd part.

While Echidna seems to get most of the praise this time around, for me, apart from Subaru, the one who stole the show was Beatrice. For most of the part, Beatrice is absent and only seen when Subaru needed her in the 1st season. To see her side of things has been something I really enjoyed.

The art style and animation have been consistent with the 1st season and mainly improved upon that. There was never a drop in quality. The action scenes were fluid and mostly similar to how things played out before.

The OP ‘Realize’ by Konomi Suzuki and ED ‘Memento’ by Nonoc are nothing short of bangers. They perfectly begin and end the episode in unison. Surprisingly I never felt the need to skip them in any episode. The background music, while borrowing tracks from the 1st season, sets up the atmosphere perfectly. They increase the immersion of viewers in the important seasons while not overshadowing the Voice Actors.

The 2nd season couldn’t have been better than this, in my opinion. It perfectly builds on what was set up earlier and takes the story further with a fast-paced storyline without a single moment that feels out of place. Out of the pretty much dull year for anime, Re: Zero definitely takes the crown for the best anime of the year so far. The only contender seems to be Attack On Titan; I hope it lives up to the hype.