David Harbour States Stranger Things Season 4 as his favorite ! A New Side of Jim Hopper in the Fourth Season?

Netflix’s flagship show, “Stranger Things,” which never seems to lose its hype, resumed its shoot for season 4 in the September of 2020 after a delay because of the Covid-19 Pandemic. The show, which delivered its third season back in March 2019, wanted to gear up for an early 2021 release, but those don’t seem to be plans anymore. There is no news about a new update even though the studio keeps giving us teasers and new development plans. So, the process continues with actor David Harbour who plays the popular police chief Jim Hopper. Harbour recently sat for an interview and gave us insights on season 4 and why it is now his favorite so far in the series.

So below are all the details we received from David Harbour’s latest interview on Season 4 and what to expect from it according to his insight.

David Harbour on the fourth season of Stranger Things

Last we saw David Harbour’s Jim Hopper was in a teaser released for Season 4 of Stranger Things. We saw him as a prisoner in Russia, ensuring he is alive after what we witnessed in season 3 as we watched him disappear and almost thought that he died. While the end of the third season saw the group of friends getting torn apart and going their different ways, and Hopper was far away in Russia, there is a lot to fill-up on what will happen next.

So, David Harbour recently sat on an interview with the People Magazine and gave us insights talking about the coming season. He told People how the Duffer Brothers, the creators of Stranger Things, are noticing what fans want and making sure they get delivered. The Duffer Brothers have used fan wishes and added their own ideas and twists, creating something really great out of it.

David Harbour went on to talk about his character Jim Hopper and how we will see him as a completely different person. Harbour talked about how before season 3, Jim Hopper was a police officer who was bound to protect his town, and now all of a sudden, he is serving as a prisoner in some Russian jail. 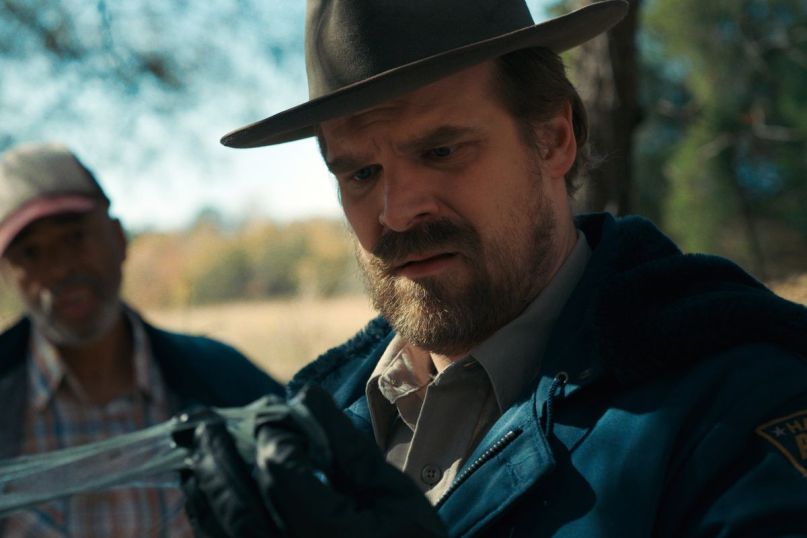 David Harbour quoted, ” The show’s creators, The Duffer Brothers are very responsive to the fan response, a step ahead with the script. See a lot of your favorite characters doing the thing that you love them for, but you’ll also see them twist it and turn it into other colors and other flavors. And one of the great things that you can see with Hopper is that he was a protector, he’s a man of justice, he now has become a prisoner. He’s trapped, and he’s isolated. And we get to see an entirely another color of him that has been hinted at. This season is my favorite because he really is going to show you some new colors and what he’s really made up of.”

So from the look of the things David Harbour revealed, it seems like the show will also focus and shed a lot of light on Jim Hopper’s character, unlike other seasons, which heavily involved only kids. And after these revelations, theories are definitely coming in a large number of ways on how the Russian prison and Jim Hopper will connect with the kids in Indiana and with Eleven and Will also far away; it all will be worth seeing how The Duffer Brothers connect these dots with their expertise and a little help from the fans as mentioned above by David Harbour.

David Harbour will be next seen in Marvel’s Black Widow in 2021.  Stay tuned for more updates on Netflix’s Stranger Things Season 4.

20 Seiki Denki Mokuroku: An Anime Adaptation Movie Yet To Be Released