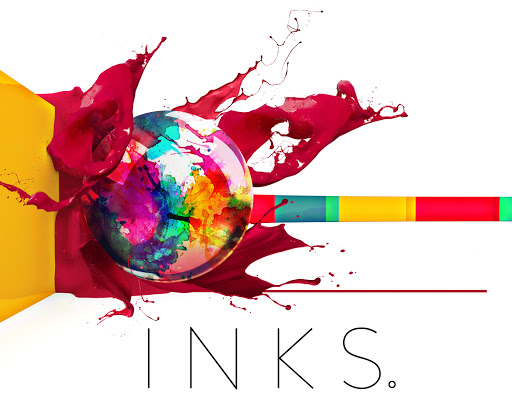 Quarters upon quarters feverishly dumped into flipping pinballs at spinning lights, all in the name of high scores. Pinball games have been around since the 1600s when King Louis the XIV of France demanded that his engineers narrow billiard tables, and our path towards arcade games was laid. Pinball games have been a staple of arcades, but most recently have made their way to Home Consoles and computers, with some of the finest crafted boards and experiences we could ask for. Demon’s Tilt and the newer released Pinball/RPG Rollers of the Realm are some of the best available. Pinball games are definitely a niche game, and Apple Arcade has added a few in their library with INKS.+ and Pinball Wizard.

The tagline read, “Pinball, with a splash of color.” My mind raced with the subtle colors, muted by bright neon’s, splashed across a canvas of flippers, high scores, and emphatic jubilation. There have been many pinball crossovers (the strategy game Odama comes to mind), but not much with a rich color palette, painted with the artistic strokes of a pinball. I read the description and instantly thought sublime serenity awaited me. INKS.+, one of the newest games to be released on the Apple Arcade, is a game for me that did not match what was advertised.

The game launches with an off-white background, and we are presented with a minimal artistic rendition of a pinball surface, replete with flippers but no high scores. Instead, we must hurl our pinball towards predetermined scoring markers that will jet out a hue of colors, splattering across the canvas. And although there is a blissful compulsion that comes with filling the pinball table with color streaks, I didn’t find much joy once the artistic minimalism faded. 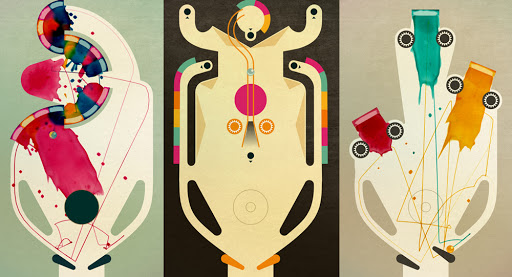 A sampling of some of the levels from INKS.+ on Apple Arcade.

The game is divided into pseudo-levels titled Dawn, Melody, Campfire, and Vespa, and there is no unlocking mechanism; simply select the level and then the specific table you wish to play. Each table has a specific amount of color panels you must strike to finish the table. The goal is to complete each level by using only one pinball. Some of the levels are intricate and took several attempts to pass, but overall it was a very simplistic, straightforward game, albeit with some challenges later on.

There was beauty in the way in which colors mixed and combined, but apart from coloring the screen, there was no gameplay associated with this. This was a missed opportunity. Instead, they should have doubled down on the colors affecting the pinball board and have some kind of mechanic where the colors mixed, add bonuses, or some type of strategic element, something to help it further differentiate from a typical pinball game. Instead, we jettison our pinball towards the goal, blindly attempting to reach it. Sometimes, the launch angles of the ball make it nigh impossible to reach. For some of the levels, I wasted a good 20 minutes waiting for just the exact angle to fling the pinball.

I am in no way an artist and am quite oblivious to color combinations, but I felt that this would have been an opportunity to introduce this to me through a fun game of pinball. INKS.+ is an experience that might be great for the right person. For a pure pinball game, this leaves much to be desired. As an aside, I don’t expect to see many updates, as this is a relaunch of the original game that debuted in August 2015.

After being disheartened by what could have been with INKS, +, I came across another pinball game on Apple Arcade that seemed to speak to what I wanted out of a mashed-up pinball experience, and I eagerly downloaded it in anticipation. Pinball Wizard is a game that, with a little tweaking, could be one of the best games available on Apple Arcade. Your ball in this game is a green-hatted wizard who is flung from flippers to defeat enemies and collect riches as you scale a tower filled with all manner of creatures. The creatures make up a bulk of the experience, with slimes that every so often detonate (originally they were supposed to detonate after being attacked, but on several playthroughs, they were detonating randomly, often just before I was to strike), spiders that web your flippers until you free them, flying bats which drop bombs, to the hairy worm-boss fight.

This is all included in the Tower portion of the game, where you unlock each floor until it culminates in a boss fight (more on this later). There are additional game modes, such as a Daily Dungeon, which is a great way to earn experience and coins, where you attempt to survive as long as you can while finding your way on the Leaderboard. My only complaint, and this was especially prevalent in both the Tower and Daily Dungeon mode, was that after every run, upon death, it exits you to the Main Menu, which definitely makes multiple play-throughs a more glaring issue. A replay button would be ideal to allow us the opportunity to avoid getting stuck in the loop of menus and loading screens. From the main menu, we have additional options, such as Dungeons is identical to the Daily Dungeon mode, but they aren’t as limited as the Daily Dungeon is, which has its very own timer.

The beginning of a long, frustrating round of pinball in the Pinball Wizard, exclusively for Apple Arcade.

The gameplay is solid, although not stellar. You have your typical flippers, which help you to fling your wizard into the numerous traps and enemies dotting the tables to earn experience and coins. I found control-wise, things were sometimes just “off.” First, the rooms are all circular, and if you are familiar with pinball arcade games, generally, the tables are rectangular, so balls bounce off the sides at specific angles so that our flippers can redirect the ball. With circular floors (or tables in the traditional pinball sense), too many times, my ball would zing around the circle, and it was difficult to change the trajectory. I would be caught in this pseudo infinite loop, with the ball doing 360’s around the room, all the while I am missing my main objectives.

Another issue I had was the overreliance on power-ups. They want you to redirect your ball at specific times, which greatly detracts from the pinball experience for me. Additionally, most powerups have to be aimed with a rotating target, which again slows down the experience. The game attempts to alleviate this by offering Skills that you can level up, but this led to additional issues I found. When you start the game, it’s a typical pinball game. If you miss the ball, and it falls back, and you try again if you have any extra balls saved up. In Pinball Wizard, when starting out your adventure, you can lose the ball three to four times before it’s game over.

The most frustrating part of the game, the boss fight.

On the higher levels, one miss, and it takes almost 90% of your health; which we then fall into the exit to Main Menu, then we have to double back to restart the level. In typical RPG games, we have a power creep, a term to rationalize the increasing power we receive from the leveling process. It almost feels as though the more I level, the more punishing a death feels. This coupled with some of the wonky physics that take place (fighting the boss in the Tower, I flung my ball into the hit area, only to be whisked away to some ethereal plane, never to be seen from again; which by the way took my health from 100% to 0), makes some of the deaths feel cheap. On the final boss of the Tower, I detonated the hit area and killed him, then was blasted off the side, again from full health to zero. After such a jubilant battle, this was incredibly frustrating. I had to stop and think surely a wizard could have had some ability to combat this unfortunate and untimely demise.

This further has compounded all the issues in the game, where one move beyond our control ends our turn and sends us on a half-minute wait, just to replay the level. Another glaring issue with deaths in this game is the camera’s position. Sometimes, the levels sprawl over two or three circular areas, and sometimes your wizard is flung from one end to the other. Sometimes the camera is in a follow position, and many times my flippers weren’t into view early enough to track the trajectory to make a successful flip. A zoomed-out camera when approaching flippers would do wonders to assist with this.

This is not a bad game by any stretch of the imagination, but this could have been amazing. I felt like the entire premise, setup, and presentation was great, but the actual pinballing, the fling balls from flippers to achieve high scores, the satisfaction of the multitude of lights and sounds blitzing my senses, was not completely achieved. I honestly feel if they took more time to carve out better boards (or levels), this experience would make it a top ten game in the Apple Arcade easily.

Leveling the skills in the game does improve your character, but I felt those more pertained to the Daily Dungeon, where I was able to capitalize and earn more rewards. This is a pseudo-RPG and has a grindy feel to it, which I am fine with. It’s just missing a few technical pinball aspects that could really flush this out. A few other additions would be to allow us to change the appearance of our wizard and really add some unique skills (shields, for instance, or chain attacks, or a countless number of RPG skills prevalent in other games). It felt cheap dying to the boss because I was bouncing around the map, so I hope physics issues like this will be addressed because I really want to like this more.

As I was finalizing this review, and any review for that matter, I like to give the game one last attempt to see if my initial thoughts were valid. I loaded up Floor 21f, the boss fight, and gave it about 15 chances. Over the course of the next 30 minutes, I was flung off the map, fell down holes, and died in a multitude of ways that were completely out of my control. With a pinball game, the ball may zip around ramps and set off explosions, but we never had the opportunity to lose our ball through the plexiglass enclosure. Too many times, my wizard was flung to his death with little to no explanation. My hope is that the developers address some issues because I really want to like Pinball Wizard. As I ended my Pinball Wizard run, I decided to make one final attempt to thwart the boss that had infuriated me for the past few hours.

On the right side of the flipper was a barrel filled with healing, and  I had exhausted all the health from that barrel. It was barren, and I used it for cover as long as I could. I then decided to end the charade and defeat my nemesis. I flipped the ball towards the right side wall looking for an opportunity to strike when suddenly, my ball gathered momentum and rocketed to the clear another side of the map, where I feel and died before reaching the wall. I was about four spaces in front of the boss’ face. I did not collide with the boss, fall in the hole, nor was I flung to my death by the over bouncy walls. I just was exhausted and died. After attempting to explain what happened, I feel just like my frail, paltry wizard, exhausted from experience.