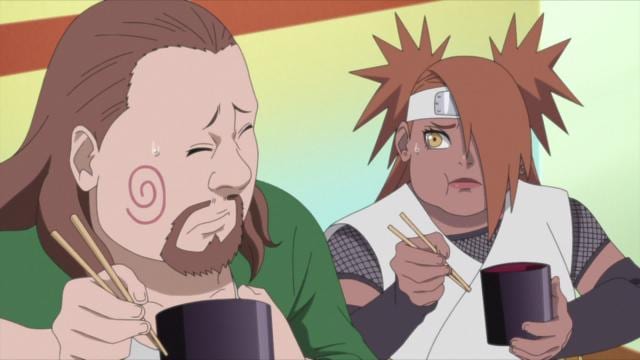 Boruto Naruto Next Generations is the current adaptation of the Naruto Shinden novel and the first episode aired last week. We got to see some very nice interaction between Naruto and his kids. I think we’ve seen very little of Naruto and Himawari, and to give them screen time was really good.

The only time we’ve really seen them together was a long time ago when Himawari had a fever and was resting. This episode was very nice and was filled with moments that proved Naruto is more than just fighting. The show is based on bonds, and that much will never change.

We’ll now be discussing the spoilers for Boruto Episode 94, which doesn’t interest me all that much. However, you might like it, and I’m sharing the spoilers here, just as I do every week. Before I begin, I want to let you know that this post contains legit spoilers. Please stop reading the post here if you don’t want to be spoiled.

With that out of our way, let’s begin. Boruto Episode 94 is about Chocho and Choji’s celebration of the family day. As you know Family day is currently ongoing, and Naruto was seen celebrating it in the last episode. This week, it’s time for Choji and Chocho, and to be honest, I’m not excited for the episode.

Chocho is a very dull character to me, and her episodes are usually boring. Even her own filler arc was nothing short of boring, and I fear that tomorrow’s episode might be the same. The synopsis for the episode states that Chocho and Choji will have an eating competition on Family Day.

They are going to see who is able to eat more, but apparently, the restaurant has some sort of trick prepared for them. As I said, the episode doesn’t sound exciting, but we’ll see. The good thing is, a week after that, Sasuke returns to the series, and that’s what I’ve wanted to see.

Boruto Naruto Next Generations Episode 94 will air tomorrow, 17 February 2019. You can watch the episode on Crunchyroll and Hulu.