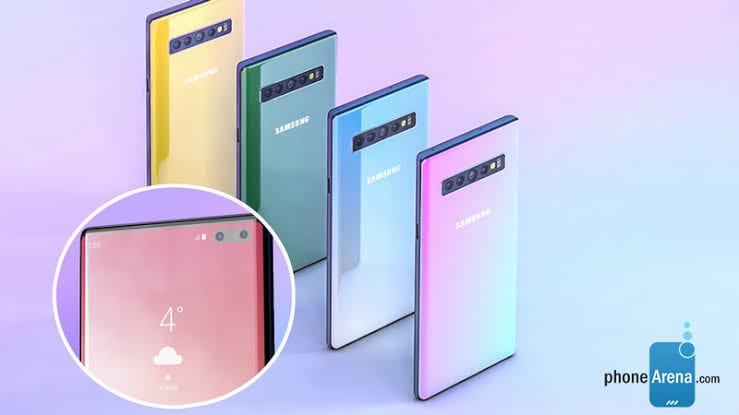 Samsung has already stunned the world with its foldable phone and S 10. However, the main Samsung phone for 2019 is expected to be Note 10. The phone is expected to be released in August 2019. Note 10 will also have a 5G version. This was confirmed after a code was found by XDA. Note 10 is also expected to have the punch hole cutout for twin selfie cameras. Also, at the rear, there will be the quad-lens camera of the Galaxy S10 5G.

Note 10 will also have the Exynos 9820/Snapdragon 855 processor with potential 5G support. There will be 12GB of RAM and storage of 1TB. The S-series design has been getting more tweaks over the years. The S-10 has a lot more screen space. Galaxy S10 Plus has screen space of 6.4 inches now there are rumors that Note 10 will have the 5G version and it will 6.7 inches of space. The S10 has an ultrasonic in-display fingerprint sensor.

Note 10 is usually the larger-screened version of the Galaxy S series. It will also have a higher capacity battery, S pen, and there will also be more improvements to the camera. There is very little doubt about a Galaxy Note’s quality. So, we should expect a very solid phone.

Usually, the Note series is revealed in August a few weeks before IFA. We can expect Note 10 to be released early August. More reports hint towards the ditching of the Infinity O panel, and it will move the selfie camera to the S-Pen stylus.