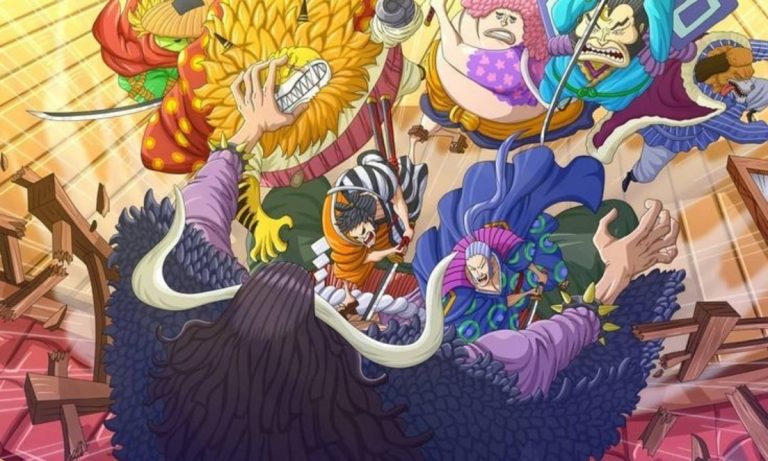 With a new chapter only a few hours away from its official release. Soon we will be looking forward to how the Onigashima raid continues as the fight is now officially on and the beast Pirates have fallen to the Strawhats and Co’s trap. The spoilers for the chapter have been long released so now we have already seen everything else there is to know about this week’s chapter.

So in this post, we will be looking at One Piece Chapter 987 release date and spoilers, and then we will take a quick recap of Chapter 986 spoilers. Note that the official release date for One Piece chapter 986 will be this weekend on Sunday, 2 August 2020. For now, we cant wait to see how things will move forward from here on.

I mean we all saw the spoilers of the chapter and they have already revealed that things won’t be moving in circles anymore. Everything is in place. And the nine red scabbards have officially made their first strike against Kaido which had signaled the official beginning of the fight just like in Toki’s premonition. Before we can further discuss the upcoming chapters, lets first look at the manga schedule below.

One Piece Chapter 987 will be released on Sunday, 09 August 2020. This will be the official release from VIZ Media and Shueisha’s Manga Plus platforms. The raw scans and spoilers for the chapters will be released a little earlier than that. So as soon as they are released, we will also update this article accordingly.

Update: As ChroniclesPR mentioned the spoilers, we will be getting back to the Manga. Keep in mind that the official release for One Piece Chapter 986 will be this weekend on Sunday. So the chapter is not yet officially released. If you would rather wait for official releases, then it is best you stop reading here. Because from here on we will be talking about events that will be covered on this weekend’s chapter and what is likely to develop from that towards next week’s manga build up.

To take a brief look at the spoilers of One Piece 986, the stage was finally set and Momonosuke was on stage for execution inside Kaido’s Mansion. The Red Scabbards have rounded up and are now almost at the stage. But Kaido teases Momonosuke and tells him that he will spare him if he denies that he is Oden’s son. But Momonosuke still pleads that he is Orochi’s son and the future Shogun of Wano.

This enraged Kaido and as he wanted to kill MOmonosuke, Yamato wanted to intervene. But Luffy stopped her and told her that starting this fight, was not theirs to do. With this, all off the Red scabbards took it into their hands and attacked Kaido and declared that the Onigashima raid had officially begun, thus bringing the chapter to an end.

One Piece Chapter 987 will then continue from here and we will update this article with its spoilers in due time. As usual, they will likely be released parts by parts until the full scans are released toward the next weekend.

Nonetheless, we will witness the continuation of the Raid and how Kaido will respond to the attack. Everyone in the Onigashima raid alliance, members of the Pirate, Ninja, Mink, Samurai alliance are on stand by. This includes other allies they have managed to gather ever since they made it to Wano.

So whatever happens, the raid has started and it will likely be intense fights from here onwards. Also, there were developments of interest from the likes of Shanks from the previous chapters as he was wondering if he should join in the raid later on. The marines are also keeping tabs on the situation. So the manga is only left with an interesting development of events from here onwards.

Whatever it might be, we will find out when the spoilers come out later in the week. For now, we can just wait for the official release as we kill some time while waiting for the spoilers of the next chapter. We managed to get these spoilers and updates courtesy of Reddit One Piece