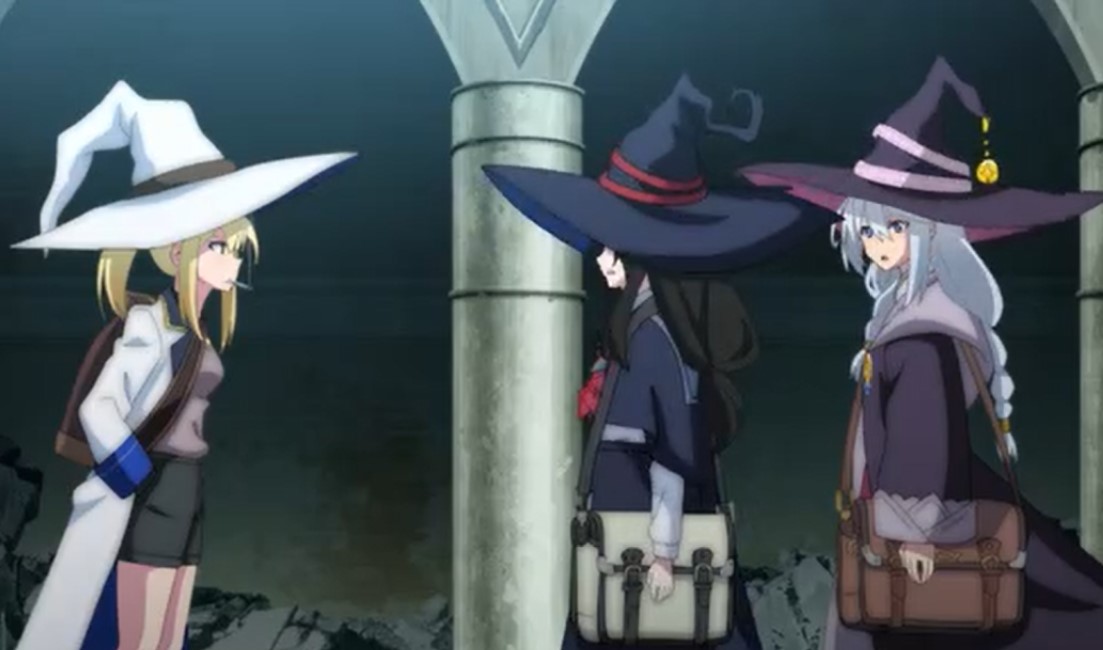 Sheila told Saya that if she crosses the ocean there is a place called Qunorts, the Town of Freedom. She is going to deliver the box there to the United Magic Association branch office there. Sheila said she just have to deliver it and get paid and Saya complaints it is an easy job why doesn’t she do it. Sheila replies that because she is going on vacation. Sheila also said that she has been working too much and she is tired and she told her not to open the box.

Because something dangerous might be inside and Saya said she won’t open it. Saya took her broom and flies to head towards her destination. Sheila went to Fran and they both went together to vacation and Sheila told the students to keep practicing their magic when she is not around. On their way, the two teachers talked about Saya. Sheila reveals that Saya know’s Fran’s apprentice and Fran said Saya is the girl Elaina help become an apprentice witch.

The Journey of Elaina Episode 11 update and Recap

The Journey of Elaina Episode 11 will be released on Friday, 11 December 2020, at 9:00 PM JST. This Anime will release its latest new episode every Friday make sure to watch out for the spoilers of the next episode when you continue. Watch The Journey of Elaina on Funimation. Let’s take a look at the recap and preview below.

Previously on The Journey of Elaina Episode 10

Sheila also reveals that she met with Elaina. She also never thought that Fran and her would go on vacation together every year like this. Both two also talked about how they didn’t like each other the first time they met. Fran remembers the good old day when she used to travel with her teacher. Her teacher told her that she needs another apprentice to join their team. That day they met with Sheila who also becomes Fran’s teacher apprentice.

Fran and her teacher waw late to arrive where they have to meet Sheila and her complaints about that. Fran didn’t like Sheila since she smokes and her chest is always out like a pub girl. Sheila didn’t like Fran because she dresses her clothes like an old hag who is going to church. Sheila always teases Fran that she looks weak and always wants to fight her. The teacher told them they must try to get along since they are fellow apprentices.

The teacher taught them everything she knows and how they can become friends. The two end up getting along and become goods friends and graduated to become teachers. Back to the present Sheila remembers something about the small box and decides to head back. She told Fran to follow her while flying at full speed.

The Journey of Elaina Episode 11 Preview

Today we have managed to get you all of the above details see next week when the new episode of this Anime hits. That is when we will be kicking another with new updates of the upcoming episode.