To an average person, psychic powers can be a gift but not for Saiki Kusuo, born with psychic abilities, Saiki wants to live a normal life without using his psychic abilities, but things always elevate around him, which makes him vulnerable to use his powers. Thus, we see the delightful outcome in the everyday life of Saiki.

With a live-action movie available on Netflix, The Disastrous Life Of Saiki K is a great anime for those who prefer gag and comedy anime. The manga was written by Shuichi Aso, which was published by Shueisha in their jump manga series in 2012, and which was later serialized by J.C Staff in collaboration with Egg Firm Studio in 2018.

The anime has no specific motive like becoming king of the pirates or something like that. It only shows how Saiki wants to live a normal life by avoiding attention and not using his psychic powers daily. Still, things always go berserk because of his friends, which makes him use his powers, which creates an interesting outcome that is amusing to watch. Suichi Aso did considerable thinking about why Saiki, like the character, doesn’t stand out in the bunch with his pink hair and antenna-like hairpins around his head, which we personally like because there are only a few anime who explain why their characters don’t stand out in the crowd. 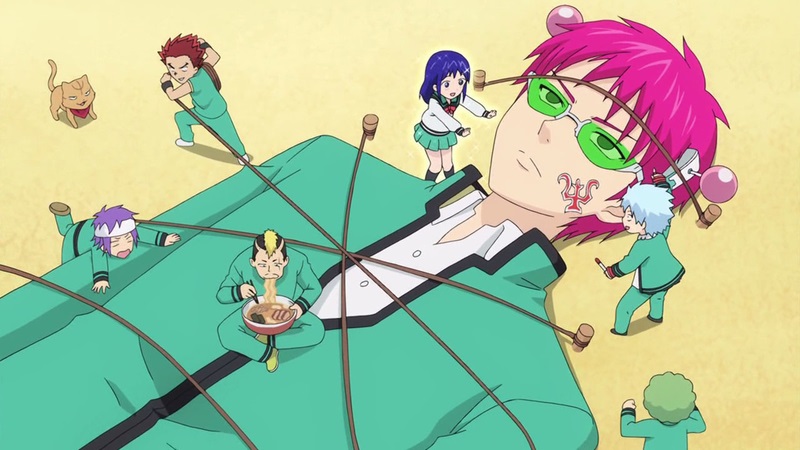 Along with Saiki, we also have other characters with their own shine; let’s take characters like Teruhashi Kokomi always has an angelic or godlike shine around the body, and Kaidou, who lives in his delusional world. Other than the characters and story, the anime also pretty good job breaking the fourth wall and interacting with viewers like us during the episode. As the new season comes, it also brings new characters with more abnormalities in the life of Saiki K.

We really love the collaboration between Gintama when they outperform the popularity levels of Saiki K. Though the anime is funny. Still, we have never seen Saiki ever moving his mouth to speak due to which sometimes we get confused about whether Saiki is speaking to a character or whether he is thinking in his mind. Saiki only moved his mouth at the end of the series in episode name The end of Saiki K Part 3.

The anime song was sung by the J Pop duo Psychic Lover; the duo consists of vocalist Yoshiyuki Yoffy and guitarist Tatsuhiro Imajo. This J Pop duo has been featured in various anime like Digimon Xros Wars, Cardfight Vanguard, and Yugi Oh GX. The song in season 1 is good and gives quite a vibes of jazz blues, but the 2nd season-opening is lame and not so good. On the other hand, the season 2 ending is so amazing that you might end up humming it. Season 2 opening aside, all the songs from Season 1 to OVA and ONA are also pretty good to hear.

In this article, we will discuss the anime series - Naoki Urasawa's Monster. A skilled neurosurgeon, Dr. Kenzo Tenma, practices...