Ozark Season 3 had been confirmed quite some time ago, and now that we’re in 2019, we’ll be getting the season very soon actually. According to sources, Ozark could go on for a total of 5 seasons, which means that we still have a long way to go for the story to finally finish.

For now, all of our focus is on Ozark Season 3, and we’re getting more and more details on the show as we move closer to it. Jason Bateman himself has given us quite a lot of stuff to look forward to. The episode count for the upcoming season has already been confirmed, and it seems we’ll be getting ten episodes.

Jason Bateman wrote in a Twitter post, “I’m happy for me, but concerned for Marty. It’s official OZARK 3 is on its way”.

As far as the plot of Season 3 goes, we’ll be tackling the problems related to Marty’s Giant Casino Boat. It was recently opened in Ozark Season 2 finale and from what we were told, it was going to be used to launder hundreds of millions of dollars for the Mexican drug cartel. 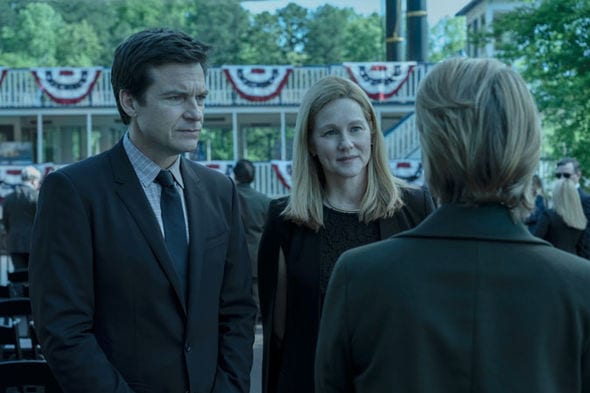 Of course, this won’t span over ten episodes. We expect a bunch of other stuff to happen in Ozark Season 3 as well, and we’re hopeful that the upcoming season of the show will be just as great as the previous ones, if not better. We were also told that it is possible that Jonah will be helping Wendy behind Marty’s back, so that’s sure to create some tension in the show.

The main cast will all return for Ozark Season 3, but the good thing here is that there will be a few new additions made. That’s a good move, as Ozark Season 2 introduced some of the best characters in the show to us.

There are rumors spreading that the show could be releasing by the end of Summer 2019, which means we are just a few months away if it is true. Additionally, the status of production has not been revealed since a long time, which makes it difficult to understand what is happening on the sets. By now, the shooting might be well undergone, and it would wrap soon if we would be seeing the show in Summer!