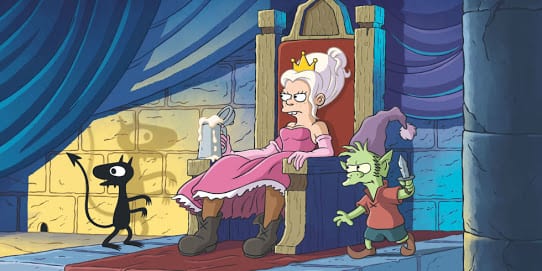 Despite not being all that popular, Disenchantment will be back with a second season. The first season of the show had a total of 20 episodes, and out of those 20, only 10 aired last year. The remaining 10 will air as season 2, or Part 2 of Disenchantment later this year.

So when exactly will the show return? What do we know about the upcoming season? We’ll be discussing that and everything else about the show in this post. Make sure that you do not continue with this post if you are not caught up with the show and don’t want to get spoiled. If spoilers don’t bother you, let’s get started.

The first 10 episodes have set things pretty interestingly for the upcoming season of the show. As you may know, Dreamland was turned to Stone so not all the characters will be returning in the upcoming part. Here’s a list of the characters who have been confirmed to return in Disenchantment Season 2:

This is all the information we have on Netflix’s Disenchantment Season 2, as we have more information on the show, we will share it with you right here on our website.