Expansion, Warlords of the New York

Tom Clancy’s The Division 2, the third-person shooter and Action role-playing and relatively popular game of Ubisoft after Tom Clancy’s Ghost Recon, have released their DLC expansions now. In this post, we will tell you about the game, and it’s a new expansion, “The warlord of the New York.”

Initially released on 7 February 2019, this game was not much popular at first because of its unfavorable reviews, but later after playing The Division 2, some people began to understand the game and start giving favorable reviews. A video game blog site “Destructoid” praised the game for its tight, satisfying gameplay with a few noticeable problems.

Division 2 is a thrilling combat looter shooter with a good gameplay loop that keeps on giving you a missing piece at the end, which will make you keep playing for months or even years to come.

The game was released on 15 March 2019 for PlayStation 4, Xbox One, and Microsoft Windows by Ubisoft( The French Video game company, which released famous games like Prince Of Persia, Assassin’s Creed, Far Cry and Ghost Recon). Division 2 is the pre-sequel of Tom Clancy’s The Division, which was released back in 2016. The game is set in a near-future Washington, D.C, who is in the aftermath of the smallpox pandemic.

The latest New DLC of the Tom Clancy’s The Division 2. While the Divisions are working to secure Washington, D.C., a familiar shadow lurks in the streets of New York City. He is non-other than one of the Division’s original Antagonists as well as the first Division Agent to go rogue. He has brought the faction of The New York City making it under his control and conquered the Lower Manhattan.

Together with Other rogue Agents and a lethal new viral strain Keener is poised to eradicate what has been rebuilt since the last catastrophic Black Friday Pandemic. The Division has a new mission now. “Stop Keener at any cost.” 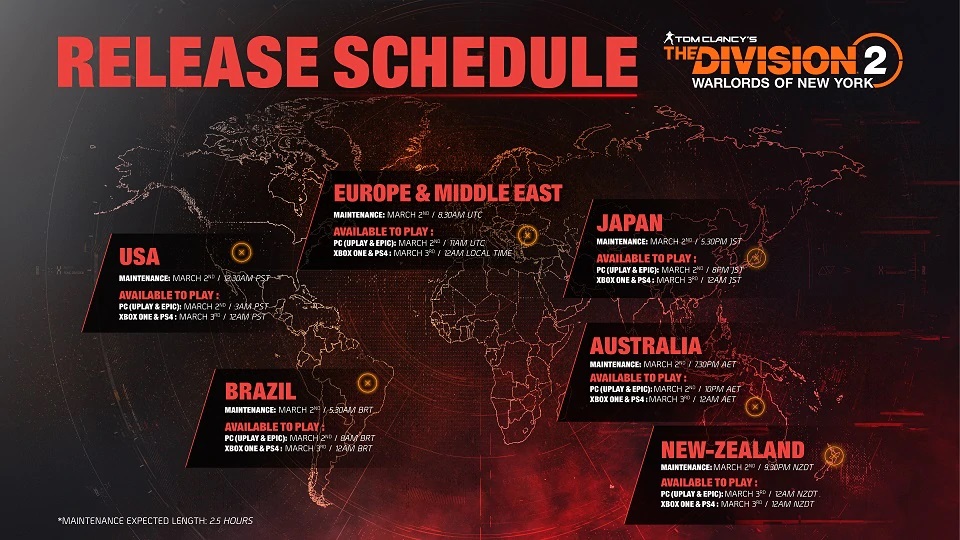 You might want to check out the trailer of the new expansion:

If you are new to the Division, you may proceed to the following information.

Like it is mentioned, the game is a third perspective and also and a cover-based third-person shooter too, with the other four players. The game takes place in 7 months after in Washington D.C, where a civil war between survivors and bands marauders breaks out. Players can make their own Division agent and can change gender and appearance. Players are equipped with different firearms like assault rifles, sniper rifles, and small machine guns with some explosives and grenades.

Some weapons are classified into different tiers and rarity, which makes high-quality guns challenging to obtain, but that’s is the fun part of this game too. These weapons indeed rare, and they have better weapon stats with talents that help boost player’s performance. In Division 2 the weapon has seven following states:

These weapons can be customized with different attachments like iron sights, scopes, and barrel attachments. Division 2 also has gear and armor. If players equipped gears with the same brand, they get a small buff in their performance. Players gain SHD Tech from leveling up, which unlocks new skills like shields, gun turret, and combat drones or can gain access to a weapon like seeker mines and chem launchers, each profession has its unique mods.

Washington, D.C is an open world to explore. Players can recruit NPCs by completing missions and providing supplies, recruiting NPCs unlocks new features like new features and projects, which are some small quests which give players rewards, XP and blueprints for crafting.

Upgrading settlements gives players gameplay such as gear stash or Fast travel. Players can also use fast travel by discovering the safehouses in the open world. Discovering safe houses reveals the locations of several SHD Tech caches and finding them grant players SHD Tech points. Players can liberate enemies’ control points and can call reinforcements to assist in battle. To gain these civilians players have to participate in world events, stopping public executions and
capturing resource convoys.

There are different collectibles like comms, relics, and artifacts, and Echoes hidden in this open-world environment.

Division 2 has 3 Dark Zones, and each of them supports up to 12 players. These Dark Zones are the area where Players have to defeat Tough enemies in order to get valuable and rare loot, and other players can take this loot. All player becomes normalized upon entering a Dark Zone in order to ensure that all player is in the level playing field.
Non-containment loot can belong to the player once they have collected, but contaminated loot need to be extracted by the players who need to be defended from the AI-Enemies and other players. These other players can steal both loot and XP once they have obtained it.

The Division 2 is after the event depicted in Tom Clancy’s The Division, where a world is devasted by a Green Poison, a potent of smallpox engineered and released in New York by some environmental terrorist. These Green Poison soon became a pandemic, resulting in chaos and casualties around the global scale.

The United States government activated a contingent of sleeper agents who are called the “Strategic Homeland Division(SHD)”, or simply “The Division”, to save order and continuity of governments. These Division agents have wide autonomy to deal with the threat they see fit and autonomy.

The Division 2 is after the event depicted in Tom Clancy’s The Division, where a world is devasted by a Green Poison, a potent of smallpox engineered and released in New York by some environmental terrorist. These Green Poison soon became a pandemic, resulting in chaos and casualties around the global scale.

The United States government activated a contingent of sleeper agents who are called the “Strategic Homeland Division(SHD),” or simply “The Division,” to save order and continuity of governments. These Division agents have wide autonomy to deal with the threat they see fit and autonomy.

Most government and military personal have evacuated Washington D.C, leaving it into lawlessness. The White House is now controlled by local Division Agents and Joint Task Force (JTF) who working to protect civilians and reestablish order. But most of the Washington D.C has turned into territories which are controlled by sperate 3 competing militias: