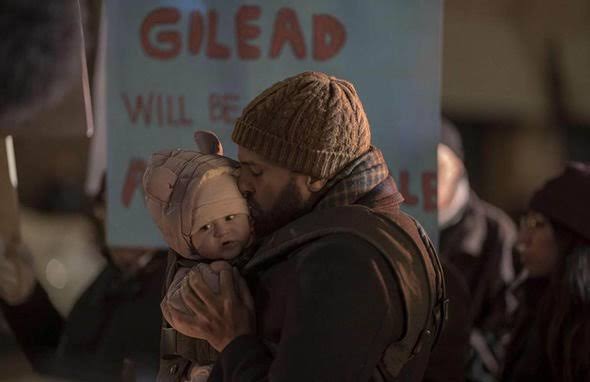 Another slow paced episode of The Handmaid’s Tale came out today, on Wednesday, June 19, 2019. It is called “Unknown Caller” and rightly so because Luke got an unknown call from Commander Lawrence’s place. It was June.

The episode began with a monologue from June at Loaves and Fishes, the departmental store. She went on about her struggle at the Gilead. Next, we see her at Commander Lawrence’s house, asking him whether Luke was in any kind of danger or not, to which Lawrence replied that they all are in danger. As June was in her room, she’s summoned by Mrs. Lawrence downstairs, informing her the Waterfords wanted to see her. Upon hearing that Serena and Fred want to see baby Nicole, June initially refuses, eventually to give in. June is forced to make a phone call to Luke (a very bad idea) and ask him to see the Waterfords in Canada. Luke refuses to see Fred but agrees for a meeting between him and Serena. June ends her conversation with Serena saying she wants a favor in return. She also slips a recorded tape to Luke through Serena in all this.

Serena travels to Canada; her first encounter is with the American government official, who tells her she still has a chance to run and redeem herself. She then meets Luke and the baby in public, this time not in the emerald green outfit, but normal clothes. The meeting doesn’t up very well; Luke is mistrustful of Serena, obviously and the latter in a snap reminds him she helped his wife to survive, indirectly threatening him. Serena also hands over the tape to Luke (a scene we are not shown).

The tape was recorded by June in the basement of Lawrence’s house. She and Mrs. Lawrence had spoken earlier about Commander’s love for music and how he would make his wife mixed tapes. This leads us to believe that we have some hope in Commander Lawrence, he might be handy in the “resistance” that Season 3 has marketed itself upon.

We then hear Luke listen to the tape, a very raw reveal by June. She discloses the identity of Nicole’s father, tells him how Nicole was made out of love and not hatred, that her real name is Holly. She’s the daughter of Nick, a man that Luke’s met; this is a child born out of love, clearly indicating to Luke she’s found love in another man at Gilead. June tells him she’d to fo everything she could to survive that Hannah was safe. She asks Luke to move on with his life and the fact that she loved him.

The episode wasn’t thrilling, but the very ending has our interests piqued. Once again, Serena returns to husband Fred with a plan-B. She’s shown dilly-dallying from her standpoint; she wants baby Nicole back to Gilead. As June is at the fluorescent grocery store, we learn how the pious handmaid of Matthew is pregnant again, eventually grasping the reality of the whole Gilead situation.

The Guardians take June to the Waterfords. Cameras and lights are set up, June is given a fresh set of clothes by Aunt Lydia. Waterford is in his ceremonial uniform. Serena is dressed in her uniform too. They’re sitting on a couch, family style, with the cameras pointed at them, and Aunt Lydia directs June to stand behind the couch, her head low.

Waterfords appeal to the Canadian government to return baby Nicole, the child of Gilead, citing she was kidnapped. June’s plan has backfired, Serena has been manipulated by Fred once again. The camera leaves June in anger and fear.

Would the Canadian government return baby Nicole, given the kind of power Gilead has attained thanks to their baby-making industry. Does Serena have a trick up her sleeve? Will Like survive? Will Gilead try other ways to get Nicole back, if their blackmailing attempt fails? All in next Wednesday’s episode.