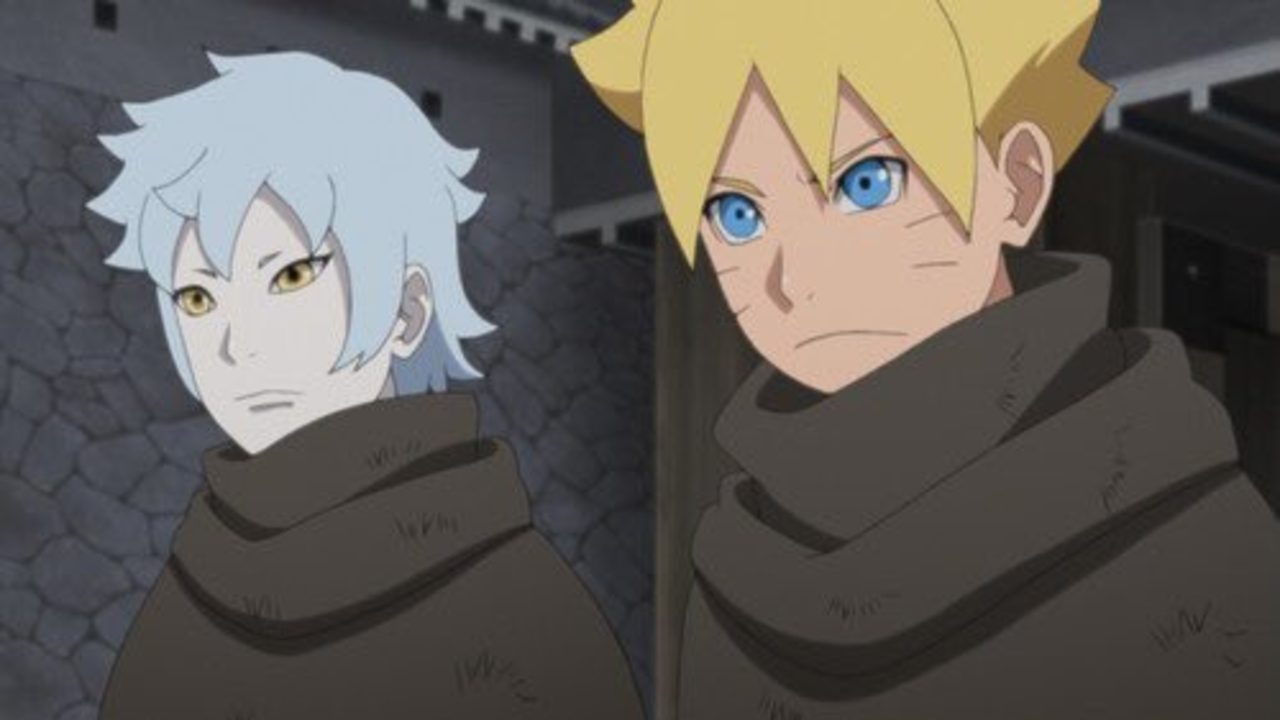 Boruto: Naruto Next Generations ‘Houzuki Castle Arc is coming to an end, and on this page, we will explain to you every event which happened in the latest episode of Boruto: The Next Generations Episode 146. Beware if you still have not watched the episode yet, or if you do need spoilers? You may continue reading this page.

Boruto, with his other two teammates, went on a special Misson To find and rescue ‘One’ person. That ‘One’ person is said to be the member of the Mujina gangs, The same Mujina gangs who are on the Blacklist of crimes. Even these underground criminals of Mujina gangs have a rule, “To never betray or reveal any information about the group or any events related to it.” And if anyone dares commit to breaking this rule, they shall be killed. And “Kokuri” is that ‘One’ who said to be once a member of this group who stole their Money and hid it, is going to turn himself up and reveal everything he knew, and of course in exchange for getting out of this Houzuki Castle. Team 7 (Boruto, Mitsuki and Sarada) invaded in the Houzuki Castle with two males as a prisoner and Sarada Uchiha alone as the Journalist. Only two person knows about this Mission, and that is the Lord of the Houzuki Prison and Kokuri himself.

Team 7 found out Kokuri is at the safest and a paradise-like place on the Houzuki Castle, the medical ward. Boruto did meet Kokuri and promised to protect and rescue him, but soon attacked by a stranger. With the situation, where Kokuri did not seem to be safe anywhere in prison, Team 7 requested Lord Mujo, to shift Kokuri to Boruto’s Cell. At first, they met with a problem because of the Cheif Benga who refuses this issue, to persuade Benga Sarada managed to find Benga’s weakness and Kokuri was transferred to Boruto’s Cell. Alas, the new problem arises as they heard that someone stole a wooden tag of the Houzuki Prison. That Wooden Tag is used as a security card/key inside the Houzuki Prison, and the one who stole is inside the same cell as Boruto, Mitsuki, and Mujina’s target Kokuri. And the person who attacked Kokuri was Arai, the most trusted guy who became friends with Boruto as soon as he entered the cell. He attacked Kokuri to finish his job but knocked out by Kedama.

Being said that the trust issue is a hard thing in Houzuki and the event happened with Arai Boruto decided to test Kokuri, to find out about the Money and his goal. Meanwhile, Kamata, one of the cellmates of Boruto, was taken for interrogation by Chief Benga where he put out a proposal with some Burgers to get the information on Boruto and Mitsuki and their relation with Kokuri, as Benga was too working with a Mujina gang member and fell in greed. To force him out, he told Kamata that the burger he was eating was bought by his own Money whom he worked hard to collect (might stole) for his sick sister, who was in the hospital.

Kamata used to secretly pass out the money to his sister by a prisoner guard, finding out the truth he was shocked. Benga asked him to find out about them and he will shorten his punishment with left with no other option poor Kamata decided to sneak on them. While Evesdroping Team 7 and Kokuri he finds out that, the hospital Kokuri donated the stolen Money happened to be the same hospital her sister was in.

Finding out the truth, he decided to not say anything, Benga found in an instant that he was lying and landed a bunch of punches and sent him to the solitary the highest guarded place in Houzuki Castle. With a swollen face and teary eyes, Kamata finds no regret on his decision, as he proudly covered up the Man who saved his sister.

Later, Konoha decided to send his reinforcement to receive Kokuri, Lord Mujo told Chief Benga that he will be going to Konoha soon, But alas, the Lord Mujo who was an Asthama patience got stroke again and dwelling in greed Benga took his Asthama inhaler. And soon after that, Chief Benga declared himself the New Lord of Houzuki Castle and decided to send Kokuri to Solitary, where half of the Mujina members are waiting to kill Kokuri.

With the current situation Team, 7 decided to break out, which only seems to be the fair option left for them. Kedama overheard the conversation and to protect the Mission Mitsuki assaulted Kedama. Kedama then revealed his past of how he was framed and failure of breaking out to Mistuski and told him to rest assured, he will not say a soul to any.

Sarada opened the tank of water to let Kokuri use it to break the seal of Houzoki but soon assaulted buy Cheif Benga when she was running away, she fell into a deep cave while fighting Benga. Without Sarada, the message was now unavailable for Team 7, as no one was now there to blink the lights from the tower. When Benga was going through Sakura stash to erase the evidence of him and his connections to Mujina gang Member Tsukiyo. He found about Boruto, Mitsuki and Kokuri and of course, the breakout. He decided to go back to their cell and check on them and punched Boruto who was sleeping on his bed turns out to be the shadow clone. Now the news of prison break went out and the other prisoners were all happy to hear the news and tease them about this.

Benga asked Kedama about them and told him he will give him the special treatment if he did so. But Kedama rejected his offer and said he was in deep sleep. Desperate Benga left the cell but didn’t notice the hole between the bed.

Benga nulled the water which was supposed to be in the tank for Kokuri and summoned a two head dog to find and kill them. Soon Sarada regained her unconsciousness and noticed the rising water, and decided to make a route to get out of here as soon as possible meanwhile Mitsuki knocked the beasts by some concretes for a while and ran toward the tank. But the tank on his way to go empty and didn’t get enough water to break the seal. The beast who was knocked came back for action this time with Chief Benga himself. Coward Kokuri ran for his life but with the Hozuki Celestial seal, he went burning with fire, at that time Sarada came and punched the ground making a flood of waters from the ground and escaped from Benga and the Beast.

Defeated and in despair, Benga now returned to Tsukiyo and lied about killing them, but Tsukiyo already knew he has failed his tasks. Benga now left with no option other than free the mastermind Tsukiyo himself. But as soon as he released his Houzuki mark He knocked Benga with his jutsu and went to kill Kokuri. Team 7 and Kokuri are now outside the Castle but got assaulted by Tsukiyo. 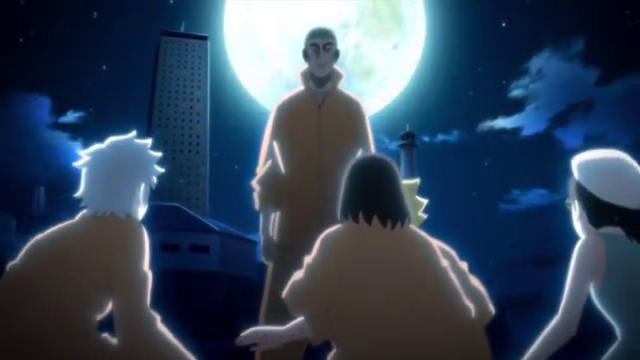 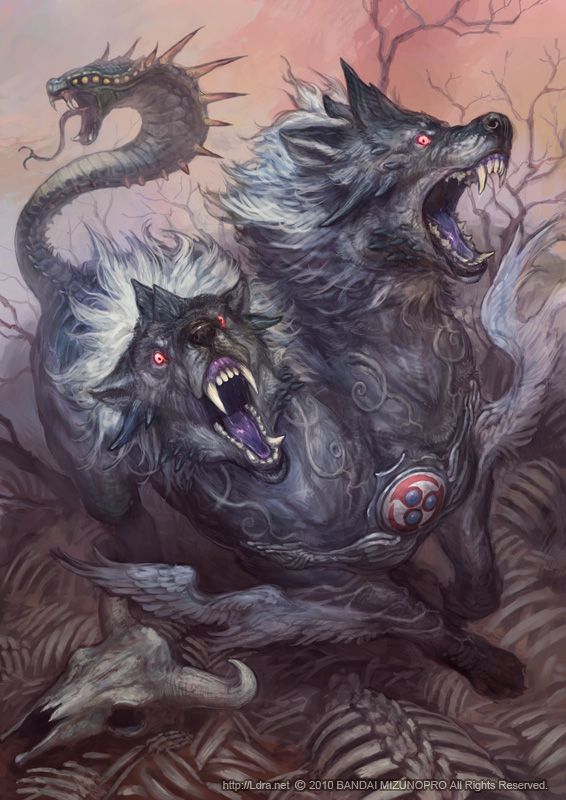