by Muskan Jaiswal
in Mixed News
0

The fourth-generation Kpop boy group, ATEEZ, has gathered love and attention due to their spectacular performances and powerful songs. And, now the ATINY (fandom) should get ready for more music from ATEEZ. The eight-member South Korean boy group has confirmed their comeback with ‘ZERO: FEVER EPILOGUE.’ Moreover, KQ Entertainment dropped a new teaser to excite the fans even more. Fans were already excited for their world tour happening next month. But, with new music coming, ATINY’s schedule is set-packed.

On November 27, ATEEZ dropped the teaser for their upcoming comeback. Later that day, the group confirmed the comeback, and also shared the release date with the fans. In September, ATEEZ came up with “ATEEZ: FEVER”  and the group was thought to complete their series. The group also released two double title tracks- “Deja Vu” and “Eternal Sunshine” which has raised the bar for the new comeback.

ATEEZ to Make a Comeback With ATEEZ: FEVER EPILOGUE In December 2021

On November 28, 2021, ATEEZ, announced their comeback. In the latest reports, ATEEZ has also stopped a new title poster on social media to create curiosity for ZERO: FEVER EPILOGUE. The mysterious teaser comes with a saying which reads, “Standing on the edge of where our confusions have led us, we are gathered here.”

Also, a long message indicating towards the new concept is written to increase our excitements. Chexk out the teaser image down below. 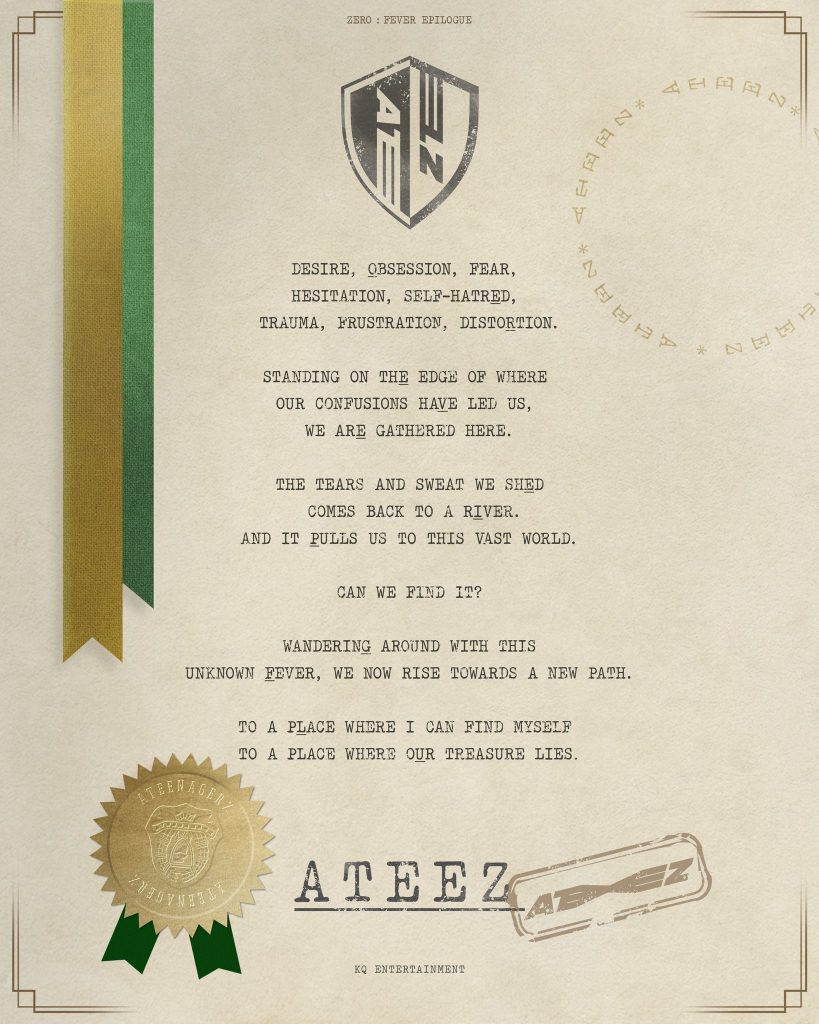 “ZERO: FEVER EPILOGUE UPON THE NEW WORLD” will be released on December 10 at 6:00 PM KST. Apart from the new comeback, ATEEZ will also pe performing at Mnet Music Asian Awards 2021. Plus, fans will get a glimpse of the boys performing live at their world tour.

So, exactly what do you hope to expect from ZERO: DEVER EPILOGUE? ATEEZ is known for their refreshing yet intrepid songs and concept. Their latest- Deja Vu- was darak. Meanwhile Eternal Sunshine was bright as a sunny day. So, the new comeback can be a complete surprise too.

Also Read: Get to Know the Maknae of TXT: Huening Kai

Hailing from the city of Taj, I've always loved writing. Besides penning down words, I love to read about the Entertainment sector. From music to films to Tv shows to production houses, I like to keep updated. And now, I've collaborated both my passions to deliver the best to you!

Survival programs have their fandom in South Korea. And MBC's Wild Idol is soon joining the team. Wild Idol from MBC is...