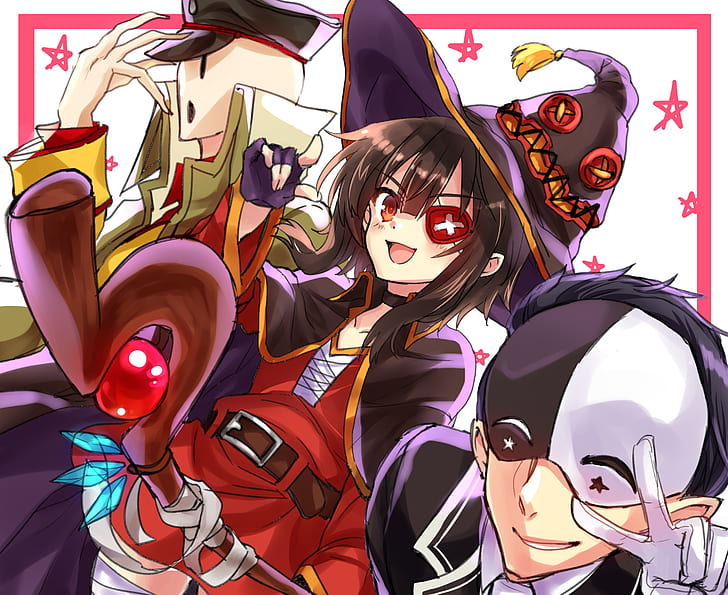 Isekai Quartet is a short chibi anime of popular Light Novels, Games, or Manga. All anime included in this short series, “Isekai Quartet,” is Owned by Kadokawa Corp. In this short series, all Characters from the different anime verses are accidentally summoned on a different world. In this particular unknown world, they have to spend their new life as a Student with other summoned Characters form another verse and must obey the school rule. Unknown to the fact where they even go back to their previous world, they spent their daily life as a High School student now. Where they interact with other different anime characters and enjoy their school life.

The title of this Episode is “Excitement! Physicals Day”. Troubled by the Daily Event happening in this school Ram and Second Lieutenant Viktoriya Serebryakov, are walking through the halls doing their normal girls-talks, but soon halted by their Teacher, Pandora’s Actor one of Momomonga’s Creation who is known as Ainz Ooal Gown now. Ainz always troubled by Pandora’s modesty setting, when Pandora stopped them Ram tried to ignore him but soon stopped to hear him out just because he is on the same staff as Mr. Roswaal, who is the Master for the Ram and Rem, and now He is a Homeroom teacher of their class in this world.

Though he stopped them, Pandora’s Actor actually wanted to speak with Second Lieutenant Serebryakov. Intrigued by her cool military costume, he shared his secret about his costumes which was created by of course Ainz Ooal Gown and told them that Ainz who is the creator and his student in this world must be excited by her Military Costume because of the same military design as Pandora’s Actor. Learning the dark past of Ainz Ooal Gown Rem left with a smug on her face. 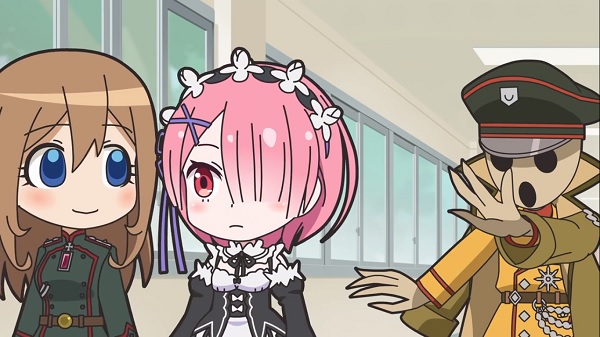 In the class, they are told about the Physicals Day, Girls to the Nurse Office, and Boys to the Gym. Shalltear wanted to do measure Ainz’s body but excused for being a girl and must measure girls in Physical Day, which Darkness encourages for her behavior, which embarrassed both Kazuma and Ainz. Coming to the topic, Who will do the boys Physical measurement?, Turns out to be Tate no Yuusha Naofumi Iwatani from class 1.

Kazuma wanted to go and peek to Physical Education, but because of the Noafumi, he can’t, which got him irritated. When Naofumi heard that he wanted to go check up on the girls Physical Education, He told him to go, but he will not take the responsibility if he ruins reputation and hurt himself mentally. But it’s fine for Kazuma because he is used to it. Kazuma excused himself, for he doesn’t seem to be interested in the girls in their class to peek. Even though he tried to peek them at the beach, but that was because of the promise. Interested in his luck stats, which was the highest in the Academy Ainz is curious to see if Kazuma can pull off the peeking. Everyone seems to be interested in his luck, so to show his luck ability, he wanted to go check on them but decided not to.

Kazuma, on the other hand, something the same is going on in the girl’s section. Albedo and Shallteer wanted to go peek Ainz but got tied by Rem’s chains. Where they are requesting to release them and asked if she wanted to be on Subaru’s side too. Rem did answer that she wants to be on her side all the time and handle his physicals too, but not at this time. She will give her physicals later in private. Impressed by the private Physical issue She handled the situation with ease, while Tanya decided not to interfere with their stalker behavior.

Where Subaru doesn’t like to go sneaking around that’s why He did not go for peeking, he proclaimed himself to be the type who doesn’t like sneaking around, like a knight. For the Lieutenant Weiss team having more fun is what they prefer than seeing naked girls. Meanwhile in Girls Physical Tanya and Megumin are having their Eye test, but because of the eyepatch in Megumin’s Left eye, she can’t. When asked to remove her eyepatch she answered with the same chunibiyo style that hell might come upon in this nurse’s office if she did. Which got her excused by Tanya for stop acting like an 8th-grade syndrome who is 12 years old is it not embarrassing and told her to grow up. But Megumin said she looks cool and there is a one-man in the class who acknowledges she looks cool with this eyepatch. When Tanya asked her about that weirdo in our class, she replied Ainz Ooal Gown.

Seems like Megumin met with the Teacher Pandora’s Actor who was on his patrol and saw Megumin and her cool eyepatch. He complimented his eyepatch which Megumin replies that he has a good taste. Pandora’s actor even questioned about her that, this cool eye patch doesn’t look like a normal eye patch. Which Megumin answered, this is eye patch actually seals away her incredible power. Pandora’s then answered in Germen Der Alte würfelt nicht, which means “God does not play dice”. Impressed by a cool line Megumin’s asked about this line which Pandora’s answered that this was taught by his creator and now his student Ainz Ooal Gown who has the same taste like him. And your test must appeal to him too. Hearing at the flashback Tanya decides to rethink what she knew about Ainz Ooal Gown.

The Physicals are over and Kazuma did come to peek on them but got late. Albedo rushed at Ainz to said she is better than Megumin and understands her tastes. When Ainz confused and looked at Megumin for Why? Megumin replies with a famous catchphrase “When you look into my Abyss, I am gazing back to your own. Which makes Ram smug again.

Also known as Tanya the Evil, the series is the story about a salaryman who got reincarnated as a girl by a God which he calls Being X. Due to his lack of beliefs through God, He reincarnated him in another world where war is common.

A man who suddenly finds himself in his game world, in the time where the server should be out. Surprisingly he can now feel, smell and talk to his NPCs. To protect his treasure and guild from others and believing other members of the guild may be out there in this world, he decided to spread the name of the Ainz Ooal Gown.

Also known as Kono ni Subarashii Sekai ni Shukufuku wo is about the adventure of Satou Kazuma who hilariously got reincarnated in a fantasy world. During his incarnation, He was told to choose a skill or weapon he should choose before heading in the fantasy world to defeat the demon lord. He chose the Goddess Aqua and to set to reincarnation, but the goddess he chose turned out to be a useless God of Party Trick. Now he has to deal with other 2 useless yet sometimes useful comrades and to enjoy his fantasy life.
Unlike other two Dark Fantasy series like Overlord and Youjo Senki, this is Comedy and Fantasy series.

Like Overlord and Youjo Senki this is also one of the dark fantasy series. A shut-in neet guy Subaru, suddenly found himself in an otherworld after getting out of the Konbini store. Without much power, how he ended up in this world or who summon him in this world. Subaru found fall for a half-elf name Emelia and decided to stay by her side. Little does he know he had to face many struggles and death. Whenever he dies he gets to restart from a certain checkpoint but the pain of death is also a real deal.

Tate no Yuusha no Nariagai

Also known as Rising of the Shield Hero. A shut-in neet Otaku Nawatani Naoufumi who suddenly got reincarnated in another world only to found himself with a defense weapon a Shield. He can’t use any other weapons other than shield which even he known is pretty much useless. But enthusiastically he determined himself to protect his teammates in fights, but later got deceived by his teammates. Abandoned by everything Naofumi gets himself a slave and sets on an adventure to become powerful to withstand the waves who destroy this world. He has to deal with these waves to get back to his former world but it seems like his slave and another party is slowly becoming his part of his life, which he can finally place his trust on.