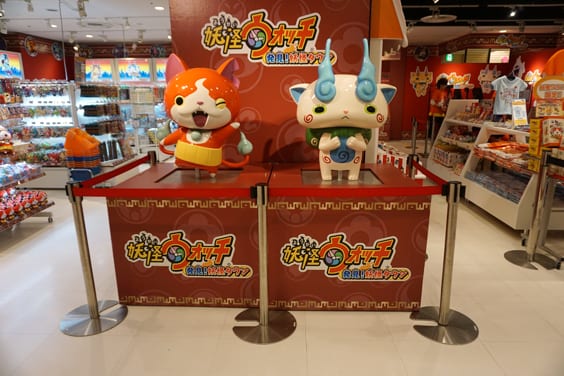 According to the official sources, the official flagship Yo-Kai watch store is shutting down on 24th February. The rapid closure of more than ten stores of the chain begun in 2018, the chain had stores in locations like Osaka, Nagoya, Tokyo, and Sapporo. The closure of the flagship store doesn’t come to a surprise to us, as the stores were being closed swiftly across Japan, however, the online store of the franchise will remain functional as per the schedule.

The stores made the sale of the toys of the characters from the franchise. The stores expanded their operations to selling the Level-5 IP merchandise such as The Snack World and Inazuma Eleven after the successful sales of Yo-Kai watch products. The primary reason for the rapid closure of stores across Japan is the subsequent fall in the sales of intellectual property.

However, the franchise made it to top #3 in the poll asking about children’s favorite characters in 2017, but the franchise was nowhere to be seen near the same rank in the survey conducted in the following year. Level 5 initially intended to launch the Yo-Kai watch 4 in the winter of 2018, as we can see Level 5 has pushed the project to come spring for the quality needs to be improvised.