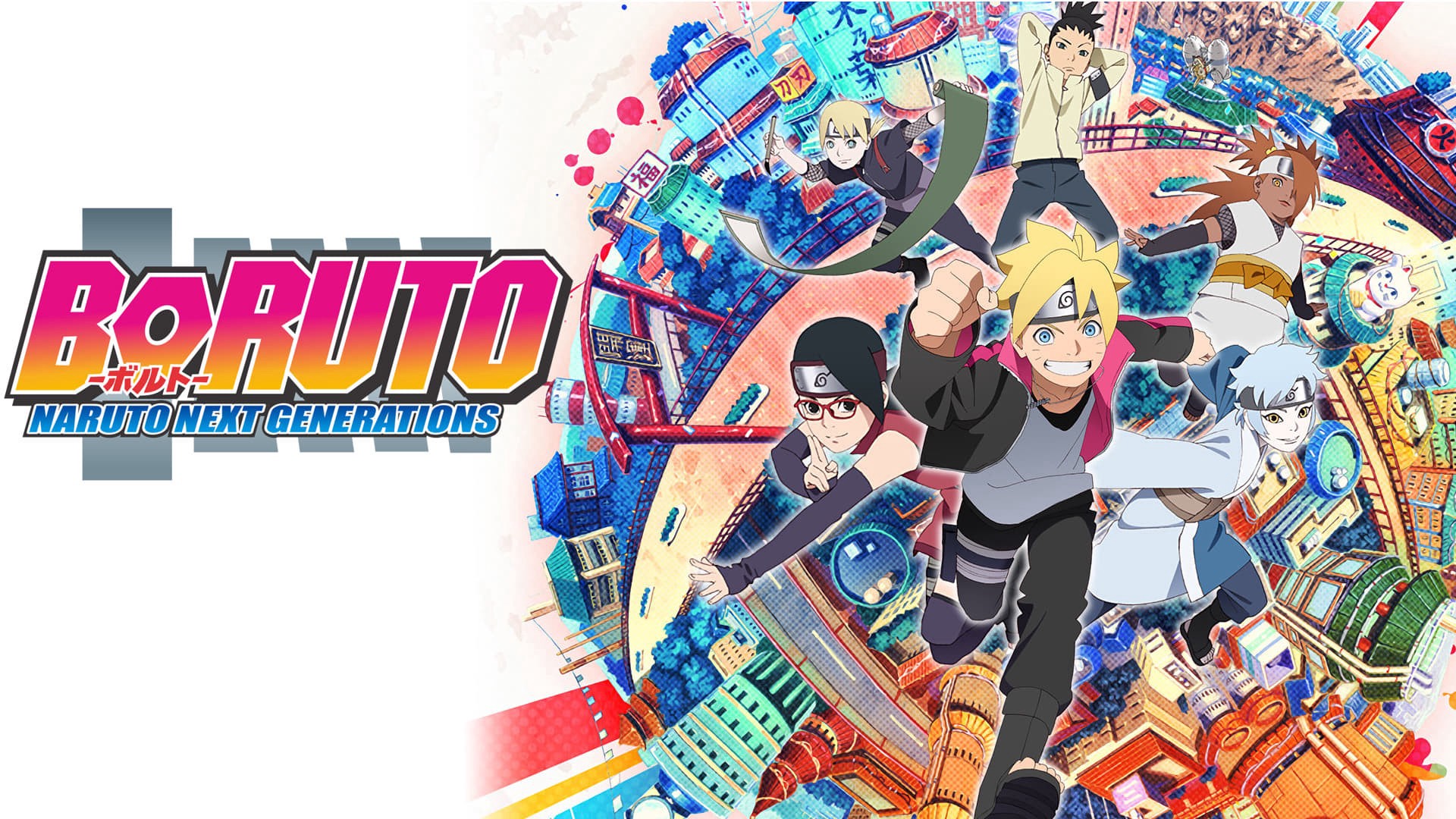 In this post, we will be talking about Boruto Naruto Next Generations Episode 147 and the final Episode of the Houzuki Castle Arc. If you still have not watched the Episode yet and do not wish any spoilers, you may skip this post, but if you are looking for the spoilers, you have come to the right place. Here we will explain every single detail which happened in the Latest Episode

After Boruto, Mitsuki and Kokuri broke out of the Houzui Prison with Sarada, who infiltrated as a Journalist and learned about him and Tsukiyo, Benga left with no choice but to lie to Tsukio that he killed them. But Tsukiyo knew in an instant that he is failed and lying about his tasks. Tsukiyo told him he has left with no choice other than free and undo his seals. Benga had to unlock him from prison and undo his seal to get his reward and keep their connection a secret. But Tsukiyo betrayed Benga and knocked him out and left to kill Kokuri.

Boruto, Mitsuki, Sarada, and Kokuri finally got out of the prison and were waiting for the food supply ship, which should be arriving on Morning. Kokuri was finally getting out of the Houzuki Castle, and thanks to Team 7 for the help, and then they suddenly got ambushed. The one who ambushed them was none other than the last boss of the Houzuki Castle Arc, Tsukiyo, and asked them if they wanna test their luck one last time. In the full moon with a nice moonlight, Team 7 is now facing the Mujina Gang’s #2 member.

First, he said to Sarada Uchiha that she really was not a journalist after all and then moved to Kokuri, his lucks runs out when he betrayed Mujina Gang all that’s left for Kokuri is death. Soon after, he said that he used shadow jutsu to capture them, but they’re something different about his shadow jutsu instead of capturing the shadow and paralyze Mitsuki, He directly captured his hands. It was Tsukiyo’s Moon Shadow Jutsu, under a full moon, his Jutsu can manifest at its full power.

Tsukiyo was alone, but Team 7 including Kokuri it’s 4, Boruto asked, if he really can take all four on himself? Tsukiyo then show them the essence of the Moon shadow. With the moon brightness, it created a shadow within Team 7 who looked just like them. Each of the shadows attacked them; not only they looked like them, they have the same power as the original one. Sarada then used Fire Style: Fireball Jutsu! And to support Sarada Mitsuki too used his Lightning Style: Snake Lightning.
But their shadow clones copied their Jutsu’s to block their attack.

Tsukiyo told them you guys sure are unlucky; he told them already his power works with at its utmost power under the moonlight. To undo his Jutsu Boruto and Sarada Jumps into Tsukiyo but got blocked by their shadow clones and then attacked Kokuri. Thanks to Mitsuki, Kokuri was saved. But how long are they going to protect Kokuri? Their Shadows are quite aggressive. Kokuri was regretting about the breakout and said their luck with escaping has run out.

Meanwhile, guards have found out the body of Benga; they decided to search for them every single prisoner to mobilize them and handle the threat. On the other hand, Boruto was still fighting with his shadows, trying to save Kokuri. The Boruto suddenly realized, that Where did they get the chakra for the shadows Jutsu?, even if they use Tsukiyo’s chakra there is now it will be limitless.

He uses his Rasengaan to test it, and then he realized that his chakra depleted faster than usual. And then they finally learned about the chakra of the shadow clone, the clone is using their Orignal owner chakra for all jutsu and attacks. The more they fight, the more exhausted they’ll get. Soon Boruto’s clone jumps after Kokuri. Kokuri ran to save his life and got saved by Boruto and hide in the bushes.

With left with no other choice, he passed Boruto his diary where he wrote all the secrets of the Mujina Gangs. Kokuri secretly noted every crime the Mujina Gang committed and the secrets about the boss. He told him to take it just in the case if he was killed. Boruto said to don’t give up after coming this far. Kokuri regrets the crime he did with the Mujina Gangs. But still, Boruto insisted to survive for the regrets he has and return to testify about gang’s crimes. Soon when they were taking Boruto’s shadow clone found them and attacked. 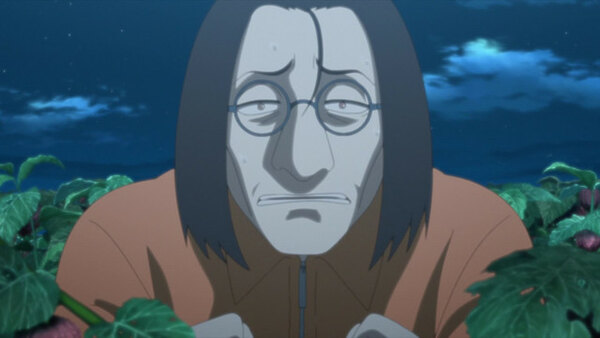 Kokuri then informed about his plan and told him he doesn’t know if it will work or not but he doesn’t wanna die doing nothing with regrets. Mitsuki then uses his lightning attack to create a smokescreen and Boruto jumps into Tsukiyo which turns out to be the shadow clone.. after the clone gathered together and went to attack Kokuri, Sarada came as a shield and Kokuri used the searchlight on the shadow clones which erased the shadow clones. It seems like shadows created by the moonlight cannot exist in a different light.

Tsukiyo then took out a shadow sword which cannot be erased even in the searchlight. But together with Mitsuki and Sarada Boruto used his Boruto Stream and hit Tsukiyo making him fly off the cliff. With their combined strength they beat Tsukiyo. But Tsukiyo managed to stay alive and drag Kokuri down with him and then they fell onto the ocean together.

Surprisingly Kokuri managed to swim to came out of the sea just as he said he was good with swimming. But soon they caught by the guards of the Houzuki, but this time not only the guards but shinobi of the Konoha also showed up with them. And among them was Sai, being lost the connection with the lord of the castle Munga, Naruto became concerned about the situation and sent the reinforcement just in the right time.

With that they are finally out of the Houzuki Castle though breaking out was unnecessary because Kokuri sentence was ended long ago. Boruto gave Sai his Note Book where he wrote all the secrets and about the boss of the Mujina Gang. Things went back to normal in prison and Team 7 left-back for Konoha.

Soon, Kokuri was interrogated yet again with the police of Konoha, where he told them about their boss who is known by the name of Shojoji. According to his notes, he uses a jutsu known as the Corpse Clone. A Jutsu where he takes over the body of someone he kills. Kokuri then left without saying a word. Everyone thought he left on a journey to start a new life.

Little did they know Kokuri went back to Mujina Gang, where he halted by a Mujina Gang. It turns out that the guy who looked like Kokuri is not Kokuri, it’s Mujina Gang Boss Shojoji. It seems like he Transformed himself into Tuskiyo to hide his identity and when he dragged Kokuri onto the ocean he killed him and took his form.

It looks like even if the Houzuki Castle Arc has ended, the Mujina Gang Arc is at the door now.