It is time again for another Boruto manga spoiler, and this time, the spoiler is for Boruto chapter 33. Delta has been a good opponent so far, despite her rough attitude and her bossy character. She was able to go head to head against Naruto and is adept with Taijutsu, equipped with chakra absorption, and last but not the least, she has a very destructive attack. However, in this next chapter, she will finally see how Naruto is not an ordinary human.

The chapter will start with Boruto and Delta fighting again with Taijutsu. Delta will try to persuade Kawaki to come back, so they can heal his hand, but Naruto will lecture her again about how she and her organization will not be allowed to lay any finger to his children. After battling again, Delta will notice how Naruto is breathless and tired. She will then plan to kill him with an eyeball attack once he will be at close range. 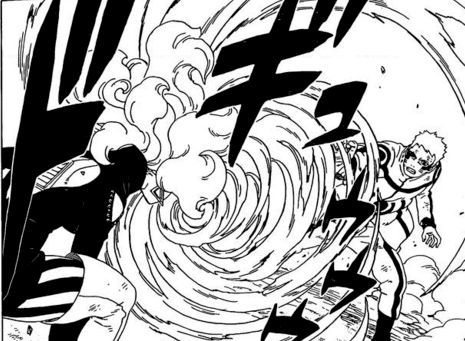 As expected Naruto tries to charge again, so Delta attacked him with her laser attack. But Naruto will see through this trick and will nullify the attack with his Odama Rasengan. Delta absorbed the attack using her eyes, but Naruto decided to feed her more of his chakra by making a Chou Odama Rasengan. Kawaki thinks it is useless, but Boruto knows this father has a plan. He was testing how much chakra could Delta absorb. After a couple or Rasengan, Delta’s eye breaks down which gave her a lot of pain. She also lost her access to her scientific ninja tool.

Naruto prepares a Chou Chou Odama Rasengan and attacked Delta, who took the hit directly. After taking the attack, Delta was shown lifeless in the bottom of a crater. Naruto exits his chakra mode and made a huge thumb up. Kawaki even grinned a little, while Naruto smiled back. And that’s it for Boruto chapter 33. What will happen in the next chapters? We will know in the next issue.

The Doom Patrol Season 2: Confirmed, To Release on HBO Max and DC Universe

Gold Rush Season 10: Will There Be A New Series?