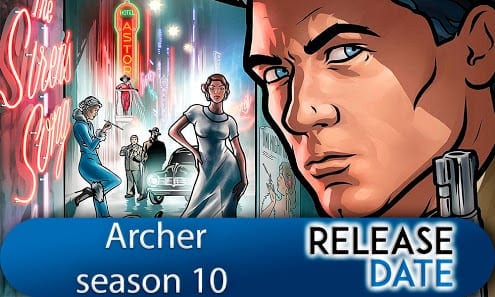 Archer, the spoofs cartoon was renewed for Season 10 back in 2018. It has been one of the strongest cartoon TV shows to have existed, and that too for 9 straight Seasons. Granted the last two seasons of Archer didn’t do all that great, the response generated by them was somewhat lukewarm. Archer has always presented out of the box, wild ideas that may not resonate with the majority but sure are liked and loved by all. One thing you must know about Archer Season 10 is that it is set in the timeline of, before the turn of the millennium. But that’s not surprising as Archer’s timelines are always blurred to a major extent and more so when it comes to technology and realism.

The new Season of Archer was announced back in July in San Diego. Regarding the key details of Season 10 of Archer, Season 10 is marketed by makers as: “Archer: 1999” and will have a tagline as: “Archer in space!”

With the key details out of our way, let’s discuss when Season 10 of Archer will premiere. As regular watchers, if the show you may know that Archer Season 8 and 9 both premiered in April of 2017 and 2018 respectively. Season 10 which is officially known as ‘Archer: 1999″, may be coming to our screens in April 2019. It is with 99% certainty that I Say that.

Why I am not entirely, a cent percent sure is because of the fact that Season 10 is rumored to be the last season of Archer. So my mind tells me that either the product may need a little extra time for something little different. This is both in terms of update or series scale etc.

As you may know, Season 8 and 9, took place in Archer’s head wholly and solely. He is in a coma after being shot at the end of Season 7. Fans are just antsy to see Archer wake up and finished all the unfinished business that he has. The series will most probably tie loose threads before it wraps up entirely.

For those in the US, Archer is pretty easy to watch as it has always premiered on FX. But that’s a hassle for those of you in the UK or other parts of the world. But here’s the thing, we live in the age of Netflix. So one will find all 9 seasons of Archer on Netflix. And hopefully, Season 10 will be there too.

Updated on April 4, 2019:
Fans of Archer will be interested in knowing that the next season of the show is going to be special, in more than one ways. While there is going to be that uniqueness that the animated show always had. This time, we’re told that there are going to be some special Easter Eggs too.

As the show heads towards space in the next season, we’ll be seeing Easter Eggs from ‘Alien’ and ‘Star Trek.’ Usually, you may not care about the Easter Eggs, but when they’re about Star Trek, they automatically excite a lot of fans, just as they information of it making a reference has excited me.

I’m very excited for the next season of Archer, and I hope you guys are too!