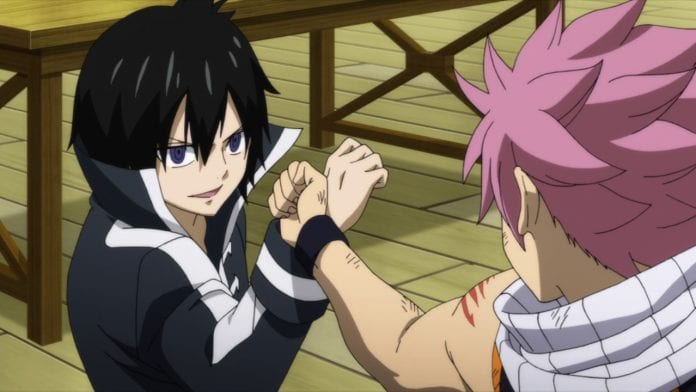 Fairy Tail anime is in its final season which is about to end now very soon. Before moving on to the spoilers of the new episode, let us see what happened in the last one. Fairy Tail episode 317 was titled “Dark Future.” In this episode, we got to see how Gray was prepared to sacrifice himself to kill Zeref.

Gray started to freeze Zeref, but on the other hand, it would kill Gray, but Natsu intervened and stopped Gray’s sacrifice and vowed to kill Zeref without anyone dying. Zeref then told Natsu that without using his Fire Dragon King Mode, Natsu is incapable of killing Zeref. Also, August’s battle with Gildarts took a turn for the worst when August threatens to kill Cana. Thus now Gildarts has become massively enraged.

Now, let us talk about what is going to happen in the upcoming episode. Those who do not like spoilers are requested to spoil the upcoming themselves only if they are willing to do so. Fairy Tail episode 318 is titled “My Name Is…”. In this episode, we will get to see Gildarts charging towards August, but Cana will tame him.

Meanwhile, Mavis will call an emergency meeting with Grey and Lucy in order the discuss further course of action as Natsu’s life is on the line. August will then save his daughter Cana from August in a marvelous fashion worth witnessing. Larcade’s truth about his origin will be revealed by Zeref himself in the upcoming episode.

The reason that Zeref hates his son is that he never knew of his existence even though he is his true son. The spoilers of the new episode look very interesting, so let us see how things unfold in the upcoming episode of Fairy Tail anime. Fairy Tail episode 318 release date is 21 July 2019.

Amrit Chatterjee - January 19, 2020 0
The action-drama TV series, Warrior, will be returning with its upcoming second season, and fans of the show are extremely excited to see what...