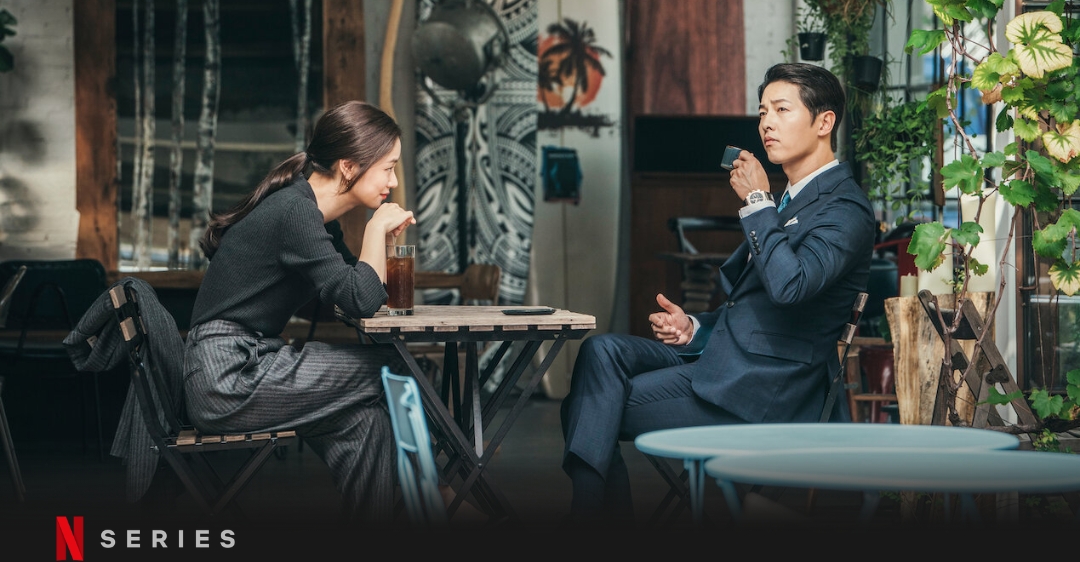 The way Vincenzo entertained us by gradually wiping away the corrupt Babel leader in the most vicious way in his recent superhit K-drama is not something to forget easily. Not many K-dramas have such a plotline where the lead character is an anti-hero who punishes the malicious antagonists without abiding by the law, and ‘Vincenzo’ clearly left us satisfied with its approach towards crime.

In brief, Vincenzo is a law action thriller with a comedy theme that revolves around an Italian consigliere who goes to South Korea in order to find tons of gold underneath the Geumja Plaza. In the meantime, he comes across an ambitious lawyer, Hong Cha-Yeong and fights to bring down a corrupt company of the Babel Group. Here are our recommendations for you on the top ten K-dramas that are similar to ‘Vincenzo’. 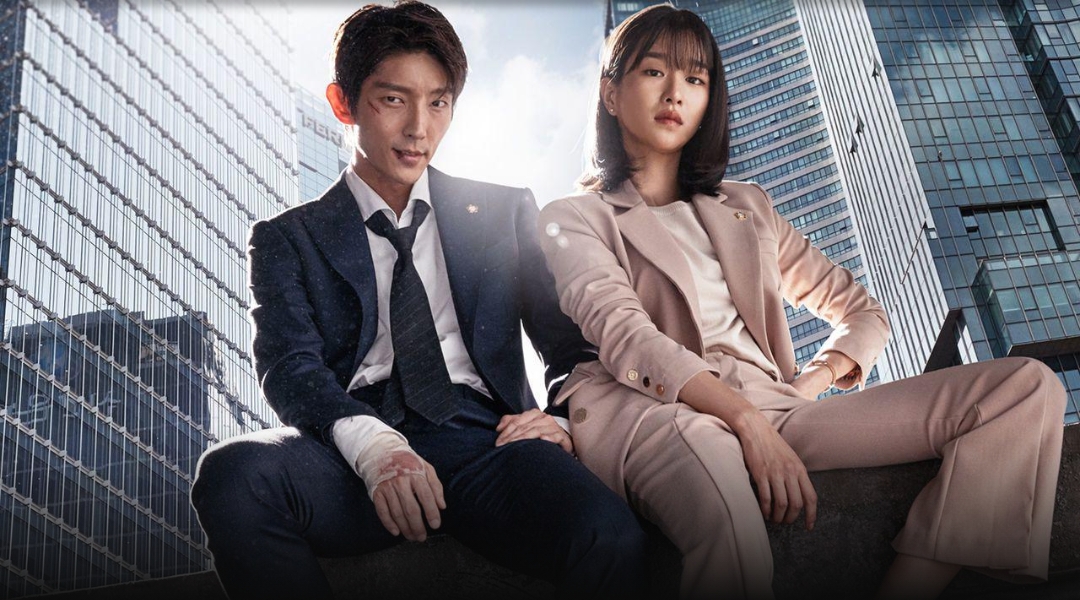 If you loved watching Vincenzo, there is a high chance ‘Lawless Lawyers’ can become one of your most favourite action-thriller Kdrama. Focusing on the members of Lawless Law Firm, primarily on Bong Sang-pil who was initially a gangster, turned into a lawyer and Ha Jae-yi, a lawyer of high integrity. Bong Sang-pil is determined to avenge the death of his mother and bring down those with absolute power, making use of his cunning skills, fists and legal loopholes for achieving his goals and ambition.

On the other hand, Ha Jae-yi works for providing justice to the needy but when she loses the authority of her license, owing to her suspension for assaulting a judge, she begins to work with Sang-pil, in order to pay off her father’s debts. Both the lawless lawyers take the help of law to bring the demise of the corrupt judge, Cha Moon-sook and the former gangster-turned-CEO, Ahn Oh Joo, fighting for justice. 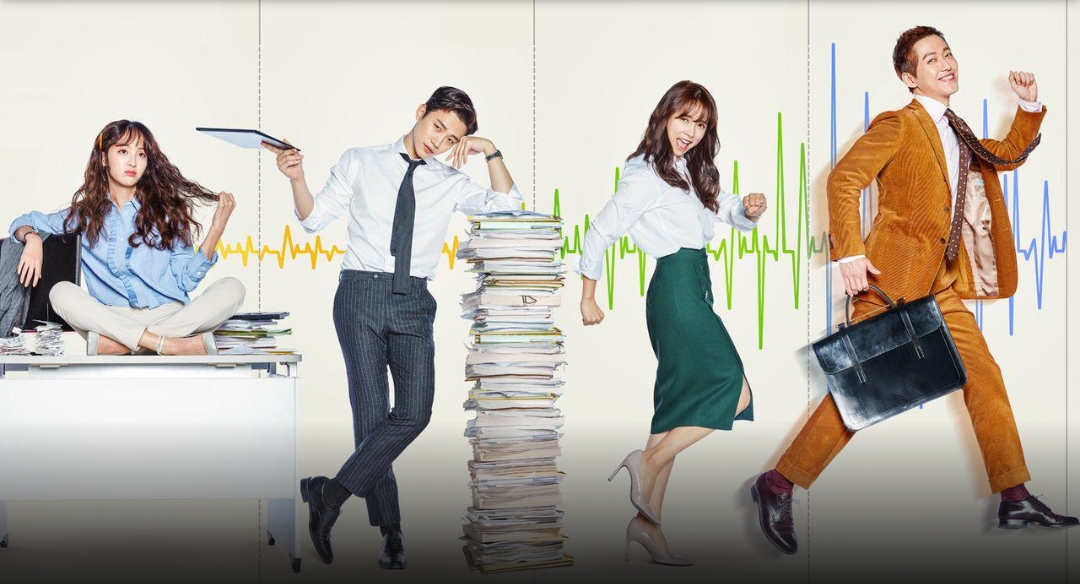 The presence of a lovable anti-hero and the series of thrilling and gratifying rescue missions, which ended up making Vincenzo superhit, might be inspired by this 2017 series, ‘Good Manager’ which will leave you on edge, asking for more. The series centres on a skilled accountant named Kim Sung Ryong, who works for the gangsters and manages to get into TQ Group as a middle manager for extracting money.

When he comes across a hot-shot accountant Yoon Ha Kyung, a peppy intern Hong Ga Eun and financial prodigy Seo Yul, he realises that he is amidst the dark clouds of office politics and comes to notice other forms of corruption by the superiors plotting the demise of the company. Sung Ryong gradually realises that he should rather fight for employees’ rights against corporate corruption rather than focusing on his initial goal. The quirky, dark and satirical comedy along with the amazing chemistry between the leads, who are each other’s partners-in-crime are enough reasons for you to start watching it right away.

The K2 is an action-packed psychological romantic drama that centres on a former mercenary soldier, Kim Je Ha aka K2 who flees away from Iraq after being falsely accused of murdering his girlfriend. He manages to get a job after he returns to Korea as a bodyguard to the owner of JSS Security, Choi Yoo Jin who is the wife of Jang Se Joon, a candidate for the President’s position. Je Ha plans to take his revenge for the murder of his girlfriend on the leader of the current ruling party, Park Kwan Soo, who is also the rival of Se Joon.

Je Ha is assigned to protect the illegitimate daughter of Se Joon, Go An Na, whose life is always at threat because of her stepmother, Choi Yoo Jin. Gradually, Go An Na begins to feel a sense of security from Je Ha, and both of them grow fond of each other. However, his professionalism doesn’t allow him to keep her safe as he works for Yoo Jin, the person who wants to harm An Na the most. 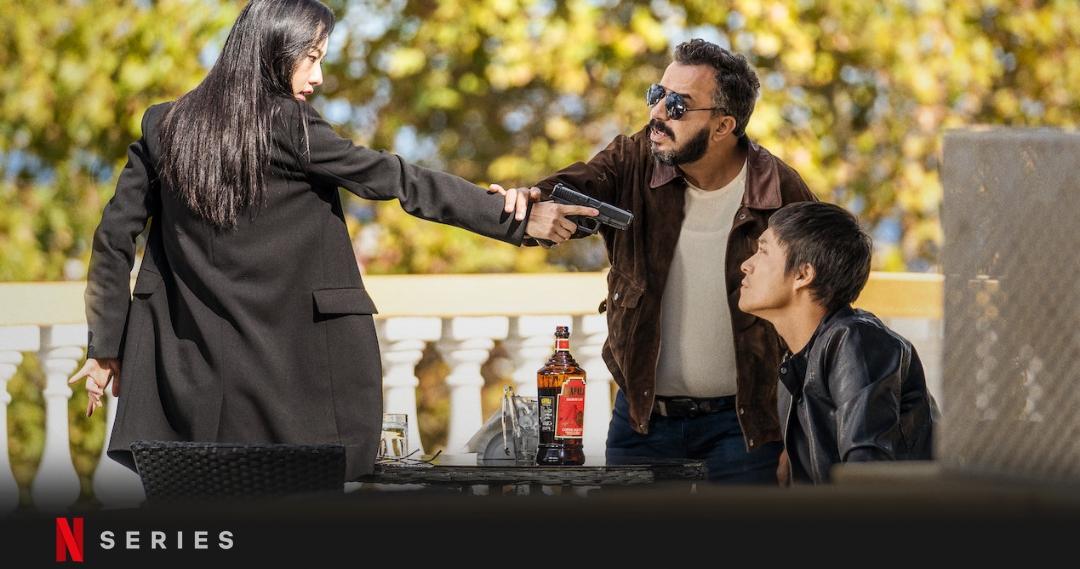 Cha Dal Gun is greatly affected due to the sudden death of his dear nephew in a suspicious plane crash, whom he raised single-handedly after his brother’s demise. As he goes to attend his funeral, he realises that the crash was not caused by a mere malfunction, but was a completely organized plan. Although he strives hard to prove his point, he seems to fail.

However, when he comes across a NIS agent, Go Hae-ri and decides to uncover the secret behind the accident, they gradually detangle the complex web of corruption behind the crash. The show has been packed with a swoon-worthy storyline, cinematography and intense action scenes. The loyal fans of the show are still hoping to get a second season to quench their desires. 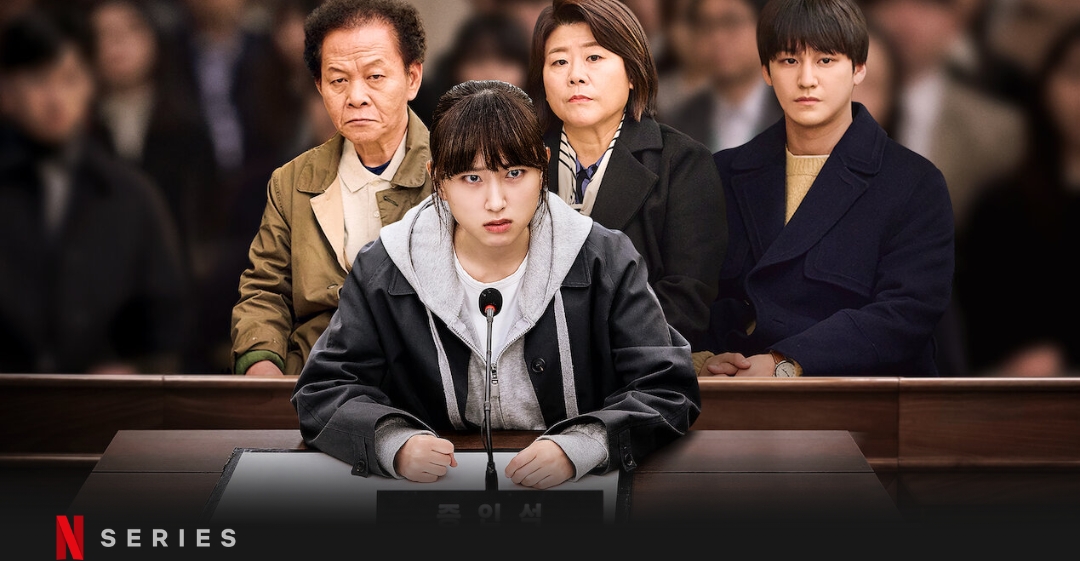 Law School is one of the most talked-about Kdramas at the time of its airing which though follows an entirely different plotline from Netflix’s Vincenzo, both of them are similar in theme and both revolve around the law. The plot involves an unprecedented case, which took place at their prestigious law school, entailing a law professor and his pioneering students. The criminal law professor, Yang Jong Hoon, earlier an elite prosecutor, is strict with his teaching ethics and a professor to steer clear of. The only colleague of Yang Jong Hoon whom he dares to confide in is Kim Eun Sook, a civil law professor, who is known for her freewheeling personality and natural air of authority.

Han Joon Hwi is a student of professor Yang, a straight-A first-year law student, who is famous for his visual features as well as smartness, hiding an unexpected secret from everyone. The series also follows another first-year law student, Kang Sol, who got a special admission in the school after striving a lot owing to her childhood poverty and hopes to be a good lawyer. 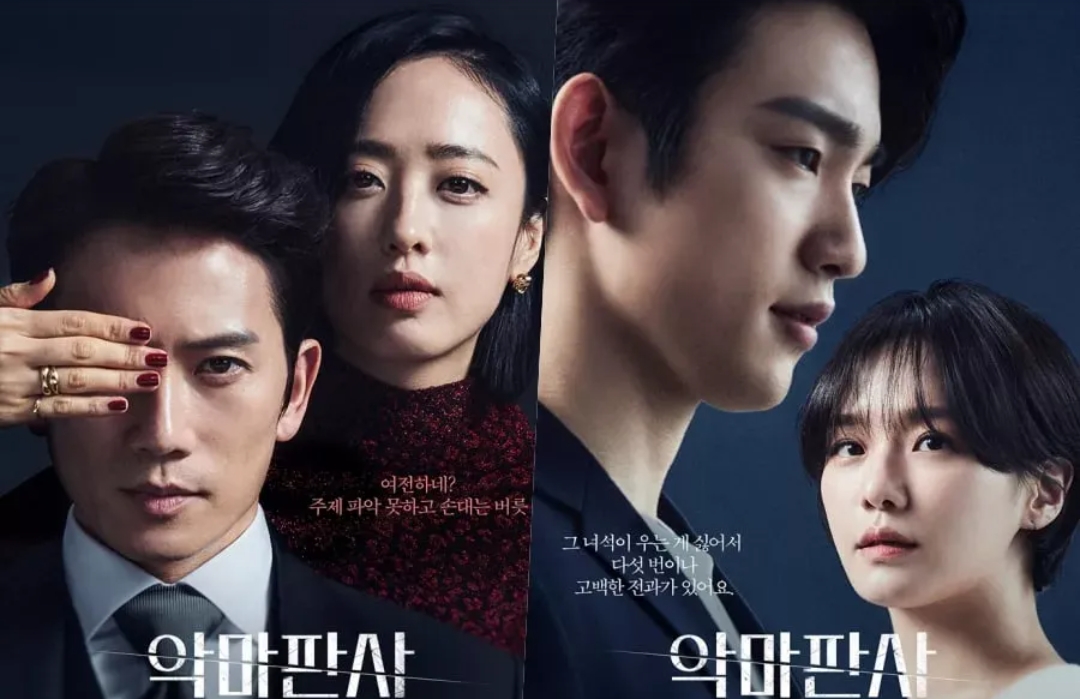 Although the show is still on-going, ‘The Devil Judge’ has already made its way to be one of the most anticipated mystery law crime K-drama. The series has its setting in a dystopian form of South Korea where people are free to harbour hatred towards their leaders openly owing to the decline of society, where trials take place on television through a courtroom live show. Due to lack of law and peace, Head Trial Judge Kang decides to signal the necessity for change and mercilessly punishes the guilty, which earns him the nickname, ‘Devil Judge’. He forms a bitter rivalry with the ambitious Jung Sun Ah, who succeeds in becoming a corporate social responsibility foundation director rising from poverty.

However, when two childhood friends, police officer Yoon Soo Hyun and rookie judge Kim Ga On, enter into this turbulent world on a quest for true justice, they will have to be prepared to accept the challenges from the notorious ‘Devil Judge’ and the scheming Jung Sun Ah.

The show follows three individuals who team up together to solve the case of the mysterious death of a senior catholic priest. One of them is an EX NIS agent turned priest named Kim Hae Il, who is unfriendly, rude and spiteful by nature; the second is a timid and talkative detective named Koo Dae Young and completing their team is a smart and beautiful prosecutor named Park Kyung Sun.

They get involved in a hilarious journey of taking down the corrupt officials and gangsters in the city. ‘The Fiery Priest’ has been written by the same screenwriter who wrote ‘Vincenzo’ therefore you can expect a lot of similarities in the style of plotline including wit and comedy. The personalities of the characters are similar as well— witty, badass and adorable. You would love it in case you prefer dark comedy shows. 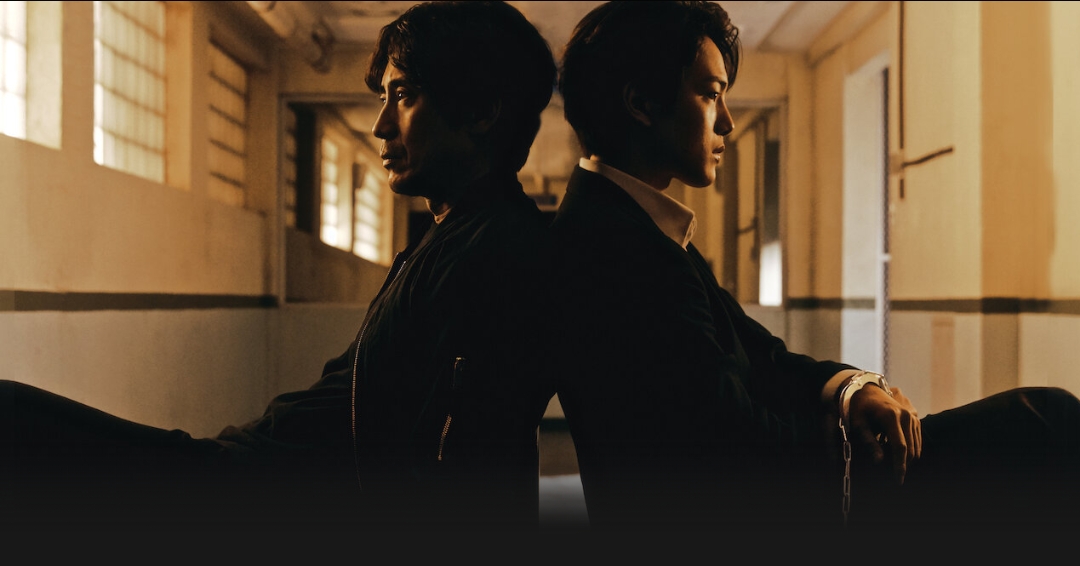 ‘Beyond Evil’ is a psychological thriller that revolves around the lives of two brave men, Lee Dong-sik and Han Joo-won who are capable of going to any length in order to catch a serial killer who is causing chaos in the city. While Lee Dong Sik was a former detective, his present service only deals with menial tasks at a police sub-station. On the other hand, his new superior, Detective Han Joo Won is an elite detective with impression qualities and high social standing, hiding a long-held secret.

Both of them team up to solve a chain of murder cases from 20 years ago, and put an end to the vicious acts of the culprit. However, as the investigation proceeds, things get more and more tangled, and they arrive at an extend when they are forced to question everyone on the way including themselves. The twists and turns of the show are sometimes so unexpected that their unpredictable-ness becomes predictable at one point of the show. 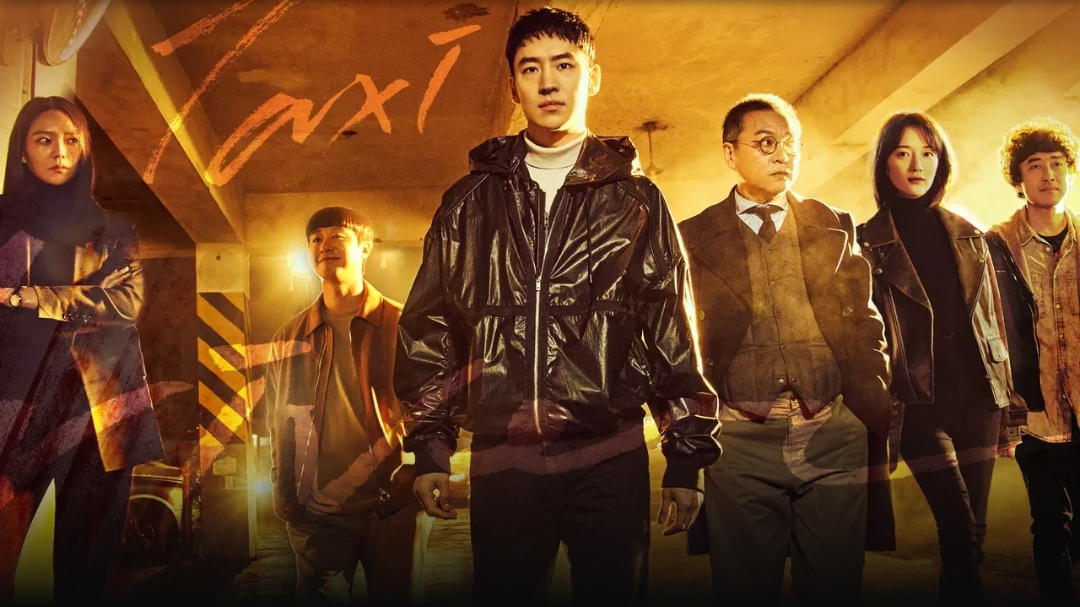 Taxi Driver follows the story of Do Gi, who decides to work for Jang Sung Chul’s company, Rainbow Taxi, which is far from being an ordinary taxi service, after his mother gets murdered by a serial killer. It is, in fact, a secret organization that strives for taking revenge for those victims who returned empty-handed from the court of law. While Do Gi serves as a star driver who delivers satisfying revenge, Ha Na, an investigating prosecutor does not like their lawless approach yet feels confused watching them solve the complicated cases with ease.

Do Gi aims to provide real justice by any means, irrespective of whether his path is approved by state laws or not. The show is dark, violent and gritty and will keep you hooked from the beginning to the end. This webtoon inspired K-drama is arguably compelling, poignant and essential viewing.

The mystery thriller series which gained actor Ji Chang Wook a huge fanbase overseas is this 2014 K-drama, ‘Healer’. The story revolves around three people from entirely different backgrounds— a strange night courier, Seo Jung Hoo, who is coded as ‘Healer’ by his clients, with amazing fighting skills, a famous reporter at a major broadcast station, Kim Moon Ho, and a second-rate tabloid writer named Chae Young Shin. Healer’s job allows him to do anything his clients want, unless it involves murdering anyone.

He starts looking into a decade-long incident involving five people who used to run an illegal pro-democracy broadcasting station, uncovering the truth along with solving a chain of present-day murders. However, his actions put the lives of two other reporters at stake, with whom he shared a past.