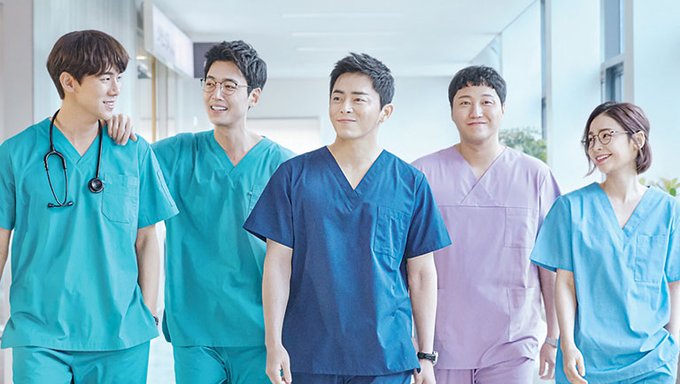 Hospital Playlist is another tvN K-drama other than Memorist that premiered in the month of March. Just like Memorist, Hospital Playlist has been getting pretty consistently rising AGB Neilson ratings across Korea. The show has now reached an 11.321% rating with its 5th episode, while the first episode had a 6.325% rating. It just goes to show that the drama is getting increasingly popular every week, and for a good reason.

Hospital Playlist’s cast includes prominent names such as Jo Jung Suk, Jeon Mi Do, Kim Dae Myung, Jung Kyung Ho, and Yoo Yeon Seok in the lead roles. The creators of this medical and musical drama are the same people behind the Reply series – director Shin Won Ho and writer Lee Woo Jung – who is responsible for the cult classic drama series as well as Prison Playbook.

Five episodes of the show have already aired, and we are looking forward to episode 6 this week. In this article, you will find streaming details and airing time of Hospital Playlist episode 6.

Hospital Playlist episode 6  will release on Thursday, April 16, 2020, at 21:00 KST (Korea Standard Time) on the tvN network in Korea. The drama releases weekly episodes every Thursday. Hospital Playlist is set for 12 episodes and will air its final episode on May 28, 2020.

What is Hospital Playlist About?

The plot of the show revolves around five doctors who are life-long friends of twenty years who went to the same medical school in 1999 and now work together in the same hospital. The quintet then goes on to form their band – and the drama will showcase how this band formed by doctors will function as they juggle their passion project and work together.

Ik Joon is a guy who lives by the “work hard, play hard” philosophy. Then there’s pediatric surgeon Jung Won, who is very nice with his patients but can be a bit difficult with his colleague-cum-friends. Joon Wan is a thoracic surgeon who is a perfectionist. Seok Hyung, on the other hand, is an obstetrics and gynecology doctor who has a hard time fitting in. Neurosurgeon Song Hwa is the main female cast of the group.