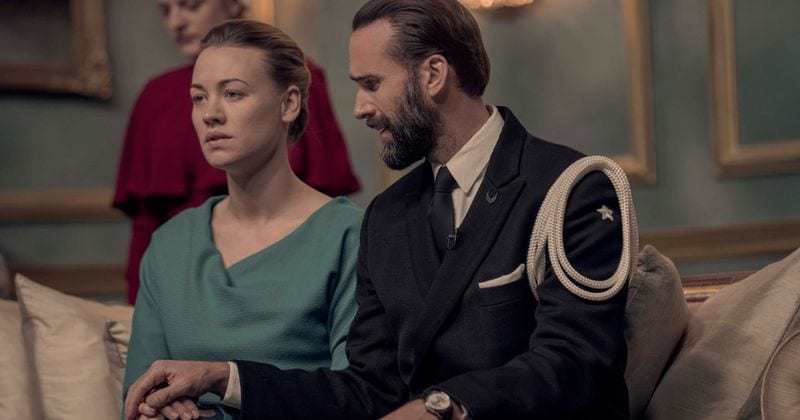 The Handmaid’s Tale is at a weird twist in the series, as we see Serena and Fred cross into Canada in the upcoming episode of the show. The Handmaid’s Tale, Season 3 episode 5, will see more focus on baby Nichole, she may become a political tool in the hands of Gilead and many fans fear she may end up being where she was baby napped/ handed over to safe hands from. As we saw in the trailer, Serena and Fred try and convince June Osborne to play mediator between them and her husband Luke. Luke is Nichole’s caretaker in Canada after Emily handed over the baby to him.

For Serena Joy’s (Yvonne Strahovski) character, we have seen some major character development. From being one of Gilead’s chief architects, she lost her finger eventually to turn her back on husband Fred Waterford (Joseph Fiennes). Joseph plays one of the main commanders of Gilead. She herself handed over Nicole to June, in order to ensure a safe and better life for her daughter. June handed over baby Nicole to Emily, who smuggled her to Canada in season 2.

The upcoming episode is titled ‘God Bless the Child”, this is where we’ll saw both Serena and June in presence of baby Nichole, who was spotted with Luke Bankhole (O.T. Fagbenle) in a viral video of anti-Gilead protests that took place in Canada.

We feel that Nicole will fast become a bone of contention between Canada and Gilead. The latest teaser was shared on the official Instagram page of The Handmaid’s Tale, we see a normally dressed Serena, teary-eyed, walking out of an airport, we think Canadian. It is pretty clear that she has crossed into Canada.

The episode comes out on Wednesday, June 19 on Hulu.