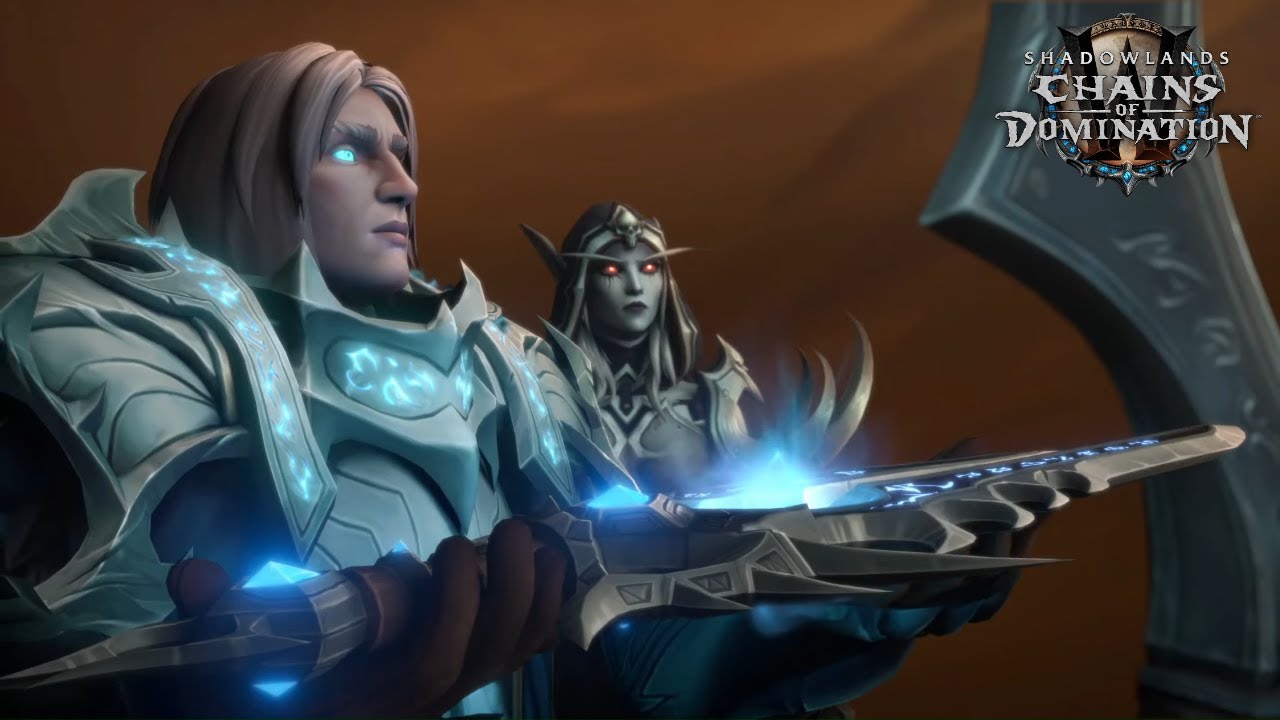 June 29, 2020, marks the first patch for the Shadowlands expansion for World of Warcraft, and while most players are either unsubscribed or farming old content in anticipation, Blizzard released a Survival Guide on their YouTube channel. For those unfamiliar, Shadowlands is the most recent expansion to the World of Warcraft franchise and was released on November 23, 2020. This has been the longest wait between the expansion launch and the first patch. Generally, patches are 3-4 months apart, and with us almost 8 months into the game, this elongated patch has been linked to COVID issues and working from home.

The biggest issue currently in-game is the lack of balance between the classes, which was further exacerbated by adding covenant powers, soul binds and legendaries. Rather than address these substantial issues, Blizzard has made additional legendaries and soul binds and reworked some PvP talents. All in all, Blizzard has struggled with balancing classes and class identity, and when issues arise, their own hubris prevents them from correcting glaring issues with each class and the specializations within them.

This is the crux of the struggles that World of Warcraft players have, when issues, bugs, or design issues arise, Blizzard turns a blind eye. They fired a large portion of the customer service department, only to see their CEO receive a $155 million dollar annual bonus. This has soured many long-time players, and further shines light on the root of the problem. If the basic abilities and designs of a character can’t be properly balanced, why add additional abilities to balance. It’s like if you are a terrible cook, and you have ruined dinner, you don’t add more ingredients, you call for taking out.

I still enjoy the game, and I currently attempting to collect everything in-game, and in these down periods, that is where my focus and attention lie. I still get excited when new content is added, but not like I used to. I am hoping that Blizzard can right the wrongs, and correct what is currently broken, but instead of adjusting what they can, them adding new legendary weapons and more abilities doesn’t seem like the best course of action. Despite the general disposition of players, let’s analyze what Blizzard is adding in Patch 9.1 – The Chains of Domination.

Patch 9.1 is all about the Jailer, the mysterious threat, as he attempts to manifest whatever nefarious plan he has concocted whilst exiled to the Maw. He has started to move his operation out of the Maw, and plans to relocate to a new land called Korthia, which was lost to the Shadowlands. This will serve as the main area for the new patch. Of course, we get Season 2 of Mythic Dungeons and PvP, along with a new raid where we finally get to face Sylvanas. Wherever you fall at in regards to Sylvanas, she has been one of the most popular characters, and having the opportunity to face her in a raid has me wondering what they have in store for her.

We get a new faction to earn reputation with and earn a few mounts. The biggest reward, and the main reason for working with the Death’s Advance faction, is that we can earn Bind on Account gear (BoA), that we can mail to alts (characters that you don’t play as often as your main characters). The item level for this gear comes in at 200. This gear is just under the new mythic threshold but will be solid for gearing our alts. The new gear is set to have been increased by 26. Baseline rewards are now item-level 184 from Normal Dungeons, 197 from Heroic, and 210 from Mythic dungeons. The ability not to have to farm heroic dungeons on other characters is a welcome addition.

With the new zone, our time in the Maw will also be changed, as we will be able to finally mount up, and skip some of the more treacherous areas. The second big change will be Renown with our Covenants. Renown is currently capped at level 40, and when 9.1 release, we will receive an additional 40 levels. The level of Renown is tied directly into unlocking flying, which per Blizzard, should be unlockable within three weeks or so. Renown is a must-complete feature of the new expansion because it has so many perks (increasing the item-level of World Quests, buffs to stats, new Soulbinds, etc.), and adding an additional 40 levels, will make farming some of the older raids much easier (looking specifically at you, Legion Raids). 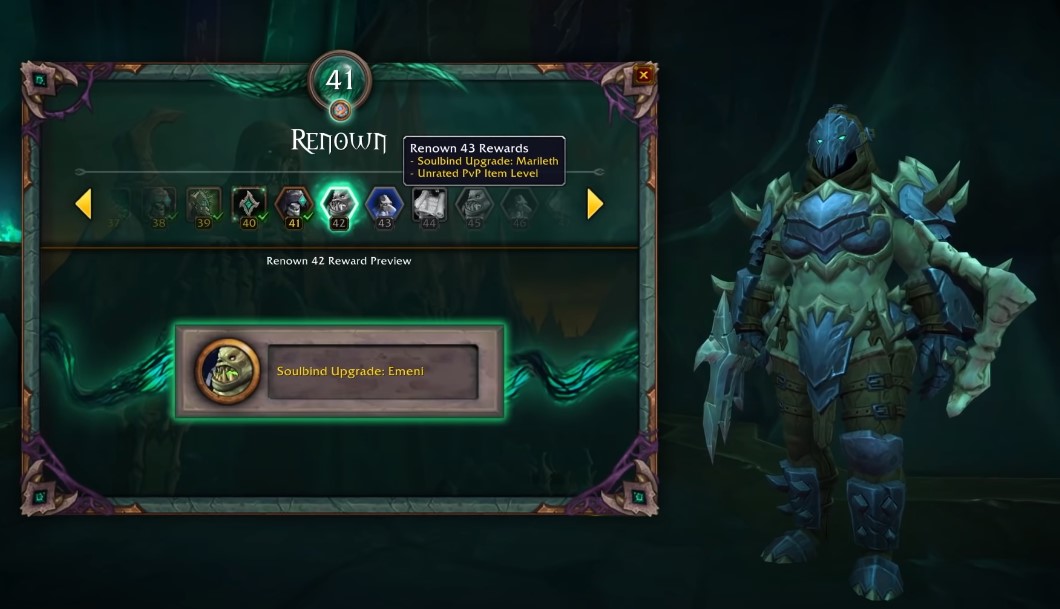 Each Covenant gets its very own mount, and although we are thankful we are getting a flight so early in an expansion, there are some large caveats that need to be addressed. In every expansion before, once the flight is unlocked, the entire realm can be traversed from the skies to your heart’s content. Now we can only fly in the four Covenant zones (Bastion, Maldraxxus, Ardenweald, and Revendreth), but we can not cross over to other zones, or fly to Oribos, the capital city. It’s almost as if Blizzard wants to continue to elongate the time it takes to perform the most basic actions in the game.

Having just recently tried out Final Fantasy XIV, there are multiple portals in the cities to let you quickly hop around the world. I still don’t understand this archaic approach to travel, this hubris-laden idea that everything has to have a cost time associated with it. Let us play what we want, don’t hide things because of invisible time gates.

Speaking of the elongation of menial tasks, Blizzard has found that they want to gate group content behind arbitrary scores. When first announced, the Mythic completion score was to be a barometer for how successful you would be in certain content, and you can raise that score in Mythic dungeons by completing the runs on time. This score has then been applied to Torghast, and they have removed the death counter from the runs. They have given us an option to earn rewards, to spend on additional bonuses in Torghast. This felt similar to the Horrific Visions, where we spent currency to make the runs easier for us.

Part of my initial issue is the lack of balance and success for some classes. This still rings true in Torghast, where they have added additional powers and more legendaries, including Covenant legendaries. Thankfully we can earn cosmetics in Torghast, which is a welcome change. Apart from Torghast, we do get a large Mythic dungeon, with eight bosses. There has been much debate on this dungeon, as the rewards item-levels seem low, for the amount of time to invest in conquering the challenges. The new PvP mounts look amazing, and although they might be out of my reach, I can dream can’t I? 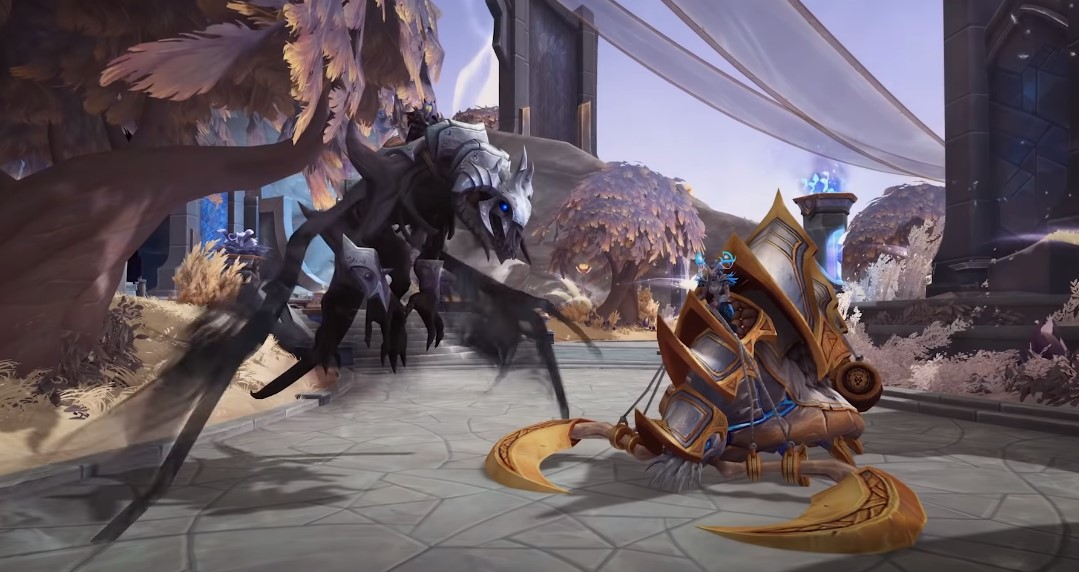 There is a new raid, which seems to preface any new Patch’s release. By acquiring the new gear inside, we are able to level it up even further, with shards, greatly increasing its effectiveness. As I am not a raider, a majority of these upgrades are unobtainable. Although I am excited to see what fate befalls Sylvanas Windrunner, I see all this new content and am disappointed that nothing has been done to rectify what is still not right. Class fantasy is gone, and most abilities are utterly ignored. If you look at each specialization, most legendaries are completely ignored by the player base, as they have little to no inherent value when compared with other pieces.

I do look forward to continuing my Covenant campaign and getting gear to send to my alts, but there is nothing that feels overtly special about this campaign. If they bring this Sylvanas narrative to a satisfying end, hopefully, that will be enough to tide us until 9.2.