Gina Carano Reveals How The Mandalorian Season 2’s Secret Was Kept Until She Arrived On The Sets! What To Expect Next?

Gina Carano, who plays the role of Cara Dune in the highly appreciated and acclaimed Disney Plus series The Mandolarian from the Star Wars Universe, recently sat on an interview and talked about the big surprise from the series towards the second season’s end. This season “The Mandolarian” saw giving the fans many surprises. Still, nothing was bigger than Luke Skywalker making his way towards the end of the series and that also in physical flesh. Of course, the studios did use some visual effects to bring out the younger Mark Hamill, but it worked out excellent in the ending. If this wasn’t the only surprise, at the end of the second season, The Mandalorian also answered the heavy talks of Boba Fett getting a solo project by officially announcing the arrival of The Book Of Boba Fett in the post-credit scene.

Gina Carano recently chatted with Drunk 3PO on YouTube and revealed how the big surprises were kept from the cast and crew. She also gave a glimpse of all the cast and crew’s reactions as they saw Luke Skywalker making his way towards the end. Here we are breaking down everything Gina Carano had to say about the ending surprises from the highly applauded second season of Disney Plus’s The Mandalorian and what we can expect next from the Star Wars Universe.

Gina Carano On The Mandalorian’s Surprises

So, Gina Carano sat with Drunk 3Po and talked about the experience when she first found out about Luke Skywalker arriving towards the end of the second season of The Mandalorian. Gina went on to say that she started finding out about the cameo during the makeup trailer and when she saw Max Lloyd-Jones, who played Luke Skywalker instead of Mark Hamill making his moves on the screen, the actor reminisced going “Oh wait? Who’s that?”. Gina Carano stated that the scene wasn’t in the scripts and how everyone who works on the set is a huge Star Wars fan with all the shirts and everything at the moment was pretty much shocking for them and how everyone started whispering all at once. 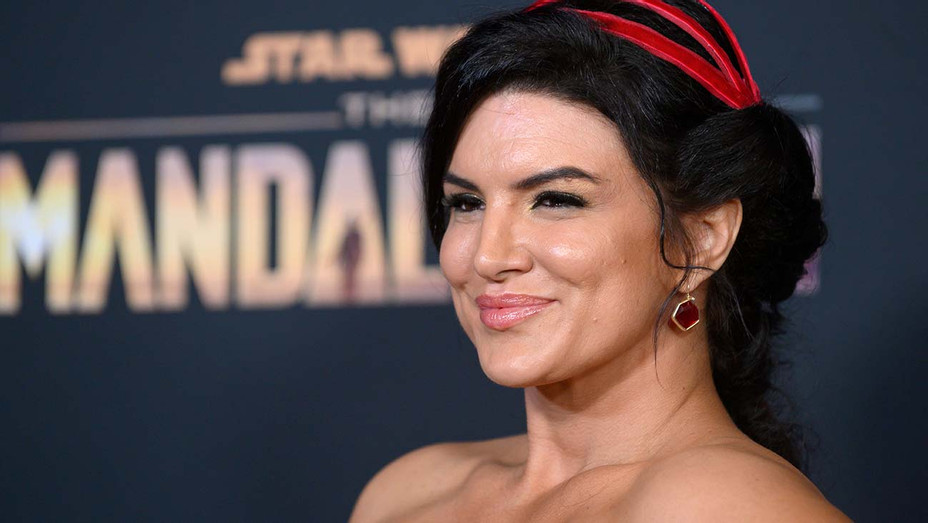 After mentioning the reaction, Gina explained how the actors were required to big black cloaks to reduce someone taking a picture of their costumes while traveling from studio to studio and leaking the spoilers. Gina also revealed one of the factors the secret managed to stay was the scripts as the actors only get the part of scripts where their character has to fill in. Gina stated that the names are thus printed in on the scripts, so nothing gets out, and in that case, even she might hold a lot of secrets. Gina Carano said that even she is a big fan of surprises herself and loves watching people getting surprised and thus managed to keep it in, or else she would have already lost her job from Lucasfilms.

Furthermore, in the interview, Gina Carano talked about her character and shared how it is still unclear what part Cara Dune will play for season 3 of Star Wars spin-off The Mandalorian. She explained how filling the shoes of the character was a big responsibility for her the moment she walked into the studios and further revealed that these kinds of surprises are what fans love and why wouldn’t anyone love more coming in thus, teasing that there will be more to come in the coming third season of The Mandalorian and all the spin-offs announced by Disney Plus.

What To Expect Next After The Mandalorian Season 2?

The second season of The Mandolarian ended on a high note, with lots of fans tunning in to see Luke Skywalker returning and the Book of Boba Fett’s announcement towards the end in the post-credit scene. The question revolving around season 3 will control the Dark saber, and Baby Yoda returns to continue his training with Mando. Definitely, Baby Yoda will be seen coming back but let’s not get our hopes high on Luke Skywalker as there are pretty low chances of watching him adore the screen once again any time soon. The Mandalorian is set to deal with the rise of the Empire as Grand Admiral Thrawn is still alive with Ahsoka Tano hunting him and Bo-Katan on her verge to grab the throne of Mandalore once again. On the other hand, fans are also expecting to see more revelations about Baby Yoda’s blood, which is instrumental for the Empire.

The update for the third season of The Mandalorian is still not revealed yet, but it is speculated to happen after The Book of Boba Fett arrives at Disney Plus in late 2021. So we can expect season three of The Mandalorian to arrive somewhere in 2022.  There are other spin-offs for The Mandalorian as planned by Disney Plus, including series based on Ahsoka and a series titled Star Wars: Rangers of the New Republic.

The Book of Boba Fett is set to tell the story of Boba Fett, who is a legendary bounty hunter in the Star Wars universe and will follow the character’s stories after the appearance in The Mandalorian. On the other hand, the series based on Ahsoka, which was announced recently in December of 2020, is set to focus on the life of the character Ahsoka Tano. So far, studios have not revealed much about the Ahsoka series yet. Another spin-off in makes is Rangers of the New Republic, which was announced with the Ahsoka series and is set to follow the adventures of authority that maintains life in the Outer Rim by challenging all kinds of threats. For further updates of The Mandalorian and its spin-offs from the Star Wars Universe, stay tuned to Otakukart.

Read More: How To Watch All Star Wars Movies In Order In 2020