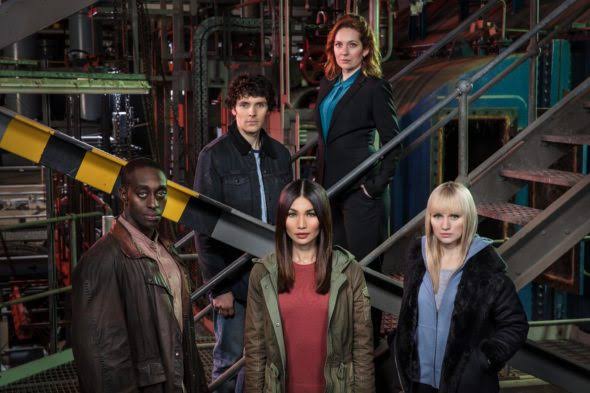 Humans, the sci-fi drama debuted first on Channel 4. It is conceptualized and written by British team Sam Vincent and Jonathan Brackley. Humans are loosely based on the Swedish science fiction drama Real Humans. The premise of the series Humans is that it explores AI and Robotics and their social, cultural, and psychological impact of the invention of anthropomorphic robots called the “synths.”

The third Season ended with two major cliffhangers. Humans are produced jointly by AMC in the United States, and Channel 4 and Kudos in the United Kingdom. In the finale episode of the third Season, we saw Niska (Emily Berrington) evolve into an all-knowing Synth. At the same time, Mattie (Lucy Carless) discovered that she was carrying a part-human, part-synthetic child.

Humans stars Gemma Chan, Ivanno Jeremiah, Katherine Parkinson, Tom Goodman-Hill, Emily Berrington, Colin Morgan, and Ruth Bradley. From Season 3, we saw Holly Earl, Ukweli Roach, Mark Bonnar, and Dino Fetscher join the cast.
Last we saw Season 3 of Humans, since then Kudos, Channel 4 and AMC are yet to order a fourth season. There were reports that Humans was canceled after Season 3, but is that so?

The third Season of Humans performed badly. It averaged 0.08 rating in the 18-49 demographic and 353,000 viewers. Compared to Season 2, the ratings are down by 42% in the demo and down by 24% in viewership. For now, we don’t have a set confirmation on Humans, Season 4 renewal. AMC will have a tough decision to make and that too with Channel 4. The ratings aren’t good enough to keep the show going for now. It’s a waiting game; let’s see how things turn out.