In this article, we will discuss the anime: Drifters. Drifters is an anime based on the manga (of the same name) written and illustrated by Kouta Hirano. Drifters is an anime that revolves around historical figures from different eras. The year is 1600. The Battle of Sekigahara is raging in Japan. Shimazu Toyohisa, a member of the Toyohisa clan, mercilessly slaughters the enemy on the battleground. In doing so, he is critically injured and is on the brink of his death. Instead of the world darkening around him, he finds himself in a strange modern hallway. An older man sitting at the other end of the hallway opens a door with a swish of his hand, and Shimazu is thrown inside it.

Upon the sight of elves, Shimazu first thinks that he’s been cast into hell. Soon, he realizes there are others like him. After meeting the famous Japanese warriors- Oda Nobunaga, Yoichi Suekata Nasu, and a magician -Olminu- from the Octrobrists, he knows that he is a Drifter. Drifters are being summoned as the evil ‘Ends,’ and the Empire of Orte gains immense power. Drifters are supposed to defeat these Ends and so begins a battle in a brand-new world war.

Drifters is an anime that gives us the crossover we sometimes imagined in our history class. What would happen if the famous evil people and war heroes around the globe team up against each other? As if that was not spicy enough, Drifters also adds fantasy elements like elves, dwarves, and magicians to it. The anime successfully combines dark fantasy and comedy with historical aspects. 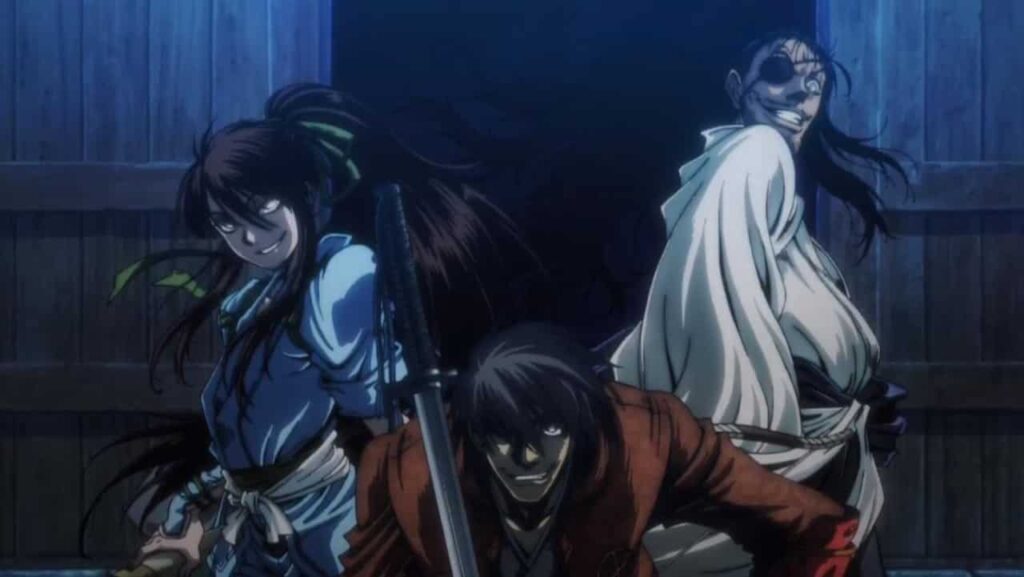 Here’s what we think of the anime:

The animation style of Drifters is catchy and beautiful. It will give a similar feel as that of Hellsing Ultimate, as they have the same creator.

As mentioned, most of the characters are actual historical figures. So, we would recommend having a basic idea about the characters before watching the anime.

Shimazu Toyohisa, a born leader, leads the drifters, elves, and dwarves. Following the Samurai Code, Shimazu is barbaric and courageous. Oda Nobunaga is an excellent strategist. Being the ‘Devil King of the Sixth Heaven, Minister of the Right,’ Oda Nobunaga shows some of the most creative and cunning ways of turning the tables around. Yoichi Suekata Nasu, the Archer, has even surpassed elves when it comes to archery skills. Being the youngest in the trio, Yoichi is the fastest in the group and takes down the enemy from a distance. Apart from the main trio, we have the infamous Butch Cassidy, Greece’s Hannibal Barca, his rival Africanus Scipio, and many more. The magicians of the Octobrist are helping the drifters.

On the evil side, the ‘Ends’ are also historical figures. The Black King leads the Ends and demi-humans. He possesses healing powers and a dark aura. His main forces include Grigori Rasputin, Hijikata Toshizou, Jeanne d’Arc, and Anastasia Nikolaevna Romanova. Suffering in their mortal lives, each of them gained supernatural powers befitting them.

The show drives out comedy via the interactions between the characters and historical events. The moment when Naoshi Kanno, a World War II pilot, calls Africanus a ‘pasta-eating freak’ just for being from Rome will throw you in a laughing fit.