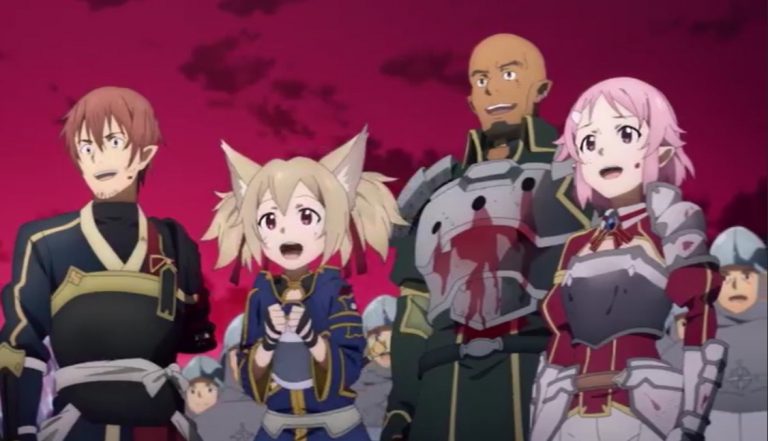 Within a matter of a few months, we will be saying goodbye to this Anime. Let’s see here how we end this Anime with only four episodes left. The army of the red forces is killing each other due to Poh control. Poh wants to kill Kirito’s friends for him to wake up. Asuna charges towards Poh to protect the one she loves and she cuts Poh’s hair. They got involved in an intense battle and Poh said he wants to kill Kirito because he has failed to kill him on floor 5 in Aincrad.

Asuna got strong while fighting with Poh she wants to protect everyone. While fighting with Poh the wings at her back appear. She managed to beat Poh and put her sword through Poh’s belly. Poh manages to regenerate and come back for the second round finally Kirito wakes up. Kirito protects everyone with perfect weapon control art from Poh’s attack. Everyone is glad that the hero is back to take down Poh.

With 30,000 American players having dived into the Underworld, they begin to slaughter everyone from both armies relentlessly. Asuna, Alice, Bercouli, Renly, and Sheyta work to combat the American players. Vecta spots Alice and commandeers a Dark Knight’s dragon and flies towards her.

Meanwhile, Iskahn is infuriated with the sight of his guild being mercilessly slaughtered as soon as they finished crawling across the ravine. With the seal in his right eye being triggered, he grabs the eye, rips it out, and destroys it. With a fit a burning rage and determination, he jumps across the ravine.

Kahn makes a deal with Asuna to fight with the humans if she builds a bridge for his guild to cross. As Alice pulls ahead of the rest of the knights, she suddenly finds herself in a dark void and loses consciousness. Vecta’s dragon grabs Alice and flies off towards the World’s End Altar, with Bercouli giving chase. While the Pugilists and the Dark Knights remain to fight off the Americans, the decoy force pursues after Vecta.

That’s all we have to offer for the latest preview and updates above. By this time next week, we will be hitting with another latest updates of this Anime.