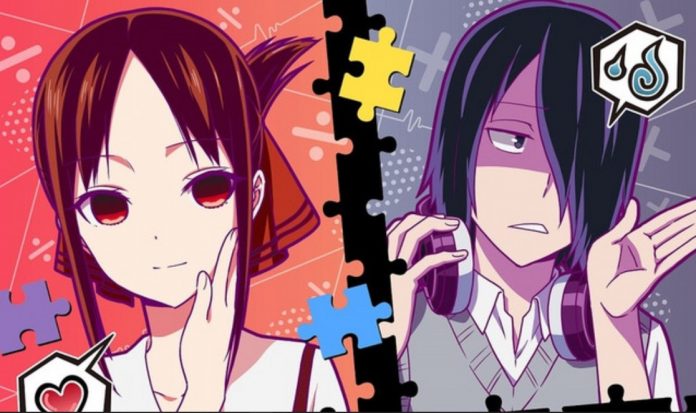 Kaguya Sama Love Is War Season 2 Update: The end of 2019 came with good news for the fans fo Kaguya sama love is war as the second season was announced at the Jump Festa 2020. This means that it will be part of the spring 2020 anime season in April. So in this post, we are going to talk about Kaguya Sama Love Is War season 2 release date, trailer, cast, and spoilers. Before we can focus more on that, let us first take a look at the production of season 2 below.

Season 2 of Kaguya sama love is war will see the return of Mamoru Hatekayama who also worked on season 1’s director’s team. The scripts will be under Yasuhiro Nakanishi’s supervision with Yuko Yahiro in the character’s designs. The opening theme for season one was Love Dramatic by Masayuki Suzuki and featuring Rikka Ihara. The first end theme was the Sentimental Crisis by halca, and the second one was #2: Chikatto Chika Chikaa♡ by Konami Kohara.

Kaguya Sama Love Is War season 2 will be released in Japan in April 2020. So far there has not been any official confirmation of the exact release date for second season. So the only thing that we have so far is that it will be released sometime in the above mentioned month. So if you wanna keep in touch with when the premiere of season 2 will be, make sure to regularly visit our site as we will bring you updates as soon as there is an official confirmation of anything relating to season 2 of Kaguya sama love is war. In the meantime,  you can check the twitter thread below for more information.

THIS IS THE BEST NEWS I COULD HAVE GOTTEN ALL YEAR❗️

The official teaser for season 2 that was released for the very first time revealed that it is still business as usual between Miyuki and Kaguya. They are still caught up in their antiques to see who will be the first one to confess their feelings to one another. Nonetheless, their pride seems to be still too much for either of them to admit it first. This is merely based on their logic that whoever confesses first will be the inferior one in their relationship.

Season 2 will have us see Miyuki face yet another challenge through the introduction of Miko Lino. This will be Miyuki’s rival in the student council elections and has a very persistent nature as she wants to take Miyuki’s place. Although Miko will turn out to be popular throughout, she will still lack enough support to defeat Miyuki in the elections. This had become a crucial factor in the story as in Season 2 of Kaguya sama love is war, Miyuki and Kaguya will be getting much closer to each other.

The preview has been released already and you can check it on the video above.

Go! Live Your Way Season 3: Release Date And All We...

Bisma Fida - March 29, 2020 13
One thing that we love about Netflix is its ability to produce successful YA/ Young adult TV shows over the years. 'Go! Live Your...