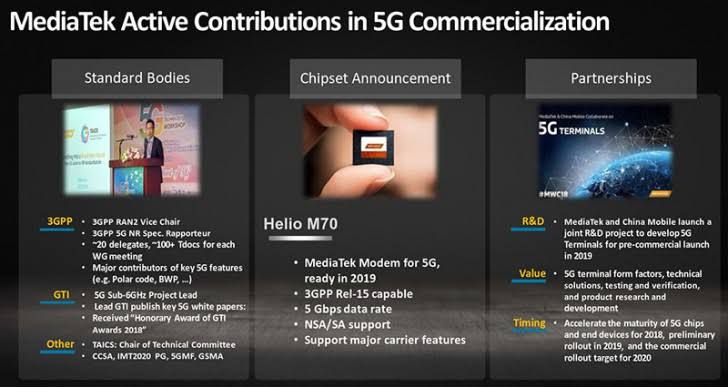 MediaTek had officially announced the last chipset of Helio M70. As per MediaTek’s promise made earlier this month, they have stuck to their promise. The most exciting thing about M70 is that it comes with 5G configuration, which is built on the 7nm process. M70 becomes the very first platform to include ARM’s Cortex-A77 CPU and Mali-G77 GPU. The big announcement was made in Taiwan as a part of this year’s Computex.

Let’s talk in detail about the 5g modem. It is integrated with Helio M70, thus allowing chipset- smartphones to able to use the 5G standalone and non-standalone sub-6GHz networks. M70 will support 2G, 3G, and 4G networks, in case you are in a non-5G coverage area. Joe Chen, MediaTek president, called the chip as the most powerful SoC announced till date.

If all goes well, this will be hitting markets at the beginning of 2020. Right now, the chipset is in manufacturing and will be shipped to manufacturers by Q3 2019. Besides the hyped 5g modem, we don’t have much information on the chipset. It is being reported that MediaTek will issue a separate announcement mentioning the exact details in the coming months.

Amongst the smartphone companies collaborating with the chipset company are Oppo and Vivo, both Chinese brands. Given the brand image of these two companies, we can very well expect both BKK subsidiaries to launch actual 5G flagships within a period of a year. More as we have it.