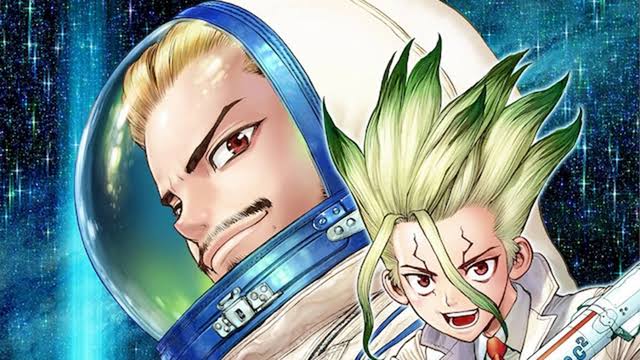 Dr. Stone Reboot: Byakuya recently released its latest chapter last weekend with Chapter 7. Back in space, the robot that Byakuya built and left behind runs and maintain the ISS as it was left alone. Meanwhile, down on earth, Byakuya is educating his grandkids about how he came from space as he checks on Lilian’s Grave. He then plans to collect rare metals in order to leave behind for the future generations as they will need it if they are to make their journey back to space.

In Space, Rei, the robot that Byakuya left behind, runs maintenance of the space station and itself for over 42 years as it starts to wonder if Byakuya had forgotten about it. Rei then decided to flash a signal every time it passes over Tokyo during the night as a message to people down on earth. Byakuya finally noticed, but he was already on his death as he was already too old.

Adapted from Dr. Stone, this story follows the life of Byakuya Ishigami and what happened shortly before the petrification. Byakuya Ishigami, who was sent to space with his team, was away when the petrification happened and was saved from the phenomenon. As the last remaining humans on earth, they started their own civilization upon successfully returning to earth and are the ancestors of the Ishigami Kingdom that now exists in Dr stone.

As Byakuya had finally noticed Rei’s signal, it was unfortunate that he was already dying as he did. Rei decided to flash a bright light every time it passes Tokyo during the night as to send signals to people down on eath. This will be most likely noticed by the future generation and will be probably revealed somewhere in Doctor stone as Senku will eventually notice it. Right now, Senku is still at a remote island, and given his ingenuity, he will notice the light as soon as he gets to Tokyo, which might lead him to develop ways to go to space.

Dr. Stone Reboot: Byakuya has been serialized in Weekly Shonen Jump since March 6, 2017, with its individual chapters collected and published by Shueisha. New Chapters are released every Sunday with Chapter 8 Scheduled for a release on the 15th of December 2019.

The latest Chapters can be viewed for free from VIZ media’s official website and Shueisha’s Manga plus app and its website, respectively. There are other sites where you can read the manga for free, but we advise you to support the official release.