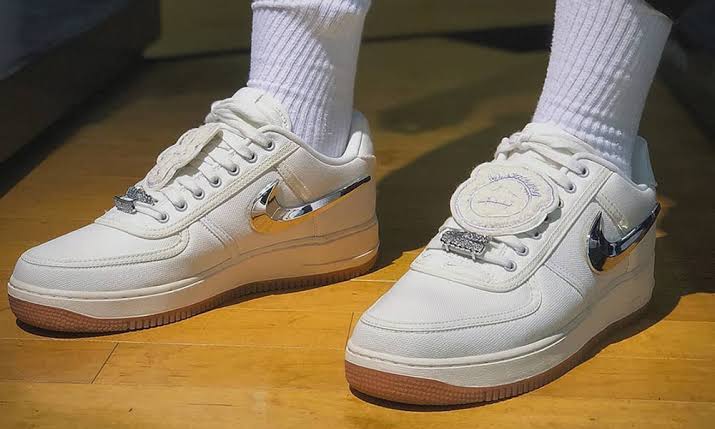 The unreleased Nike Force 1 by Travis Scott is a tribute to his hometown Houston. Travis this time has come up with the best damn iteration of Nike Air Force 1 and recently teased it for us too. If you may know Travis Scott, the rapper well, you know that he is quite the hit in sneaker business. If you may remember, Scott and the Swoosh released two colorways of the “Cactus Jack” Air Force 1 Low in the past.

Recently on his Instagram, Travis Scott teased the release for a new kind of Air Force 1. In the photo, we see a different kind of Air Force 1 and as I said it would pay homage to Scott’s home city of Houston. The skids show us a different kind of material on the upper surface, some sort of a suede mudguard which goes around the leather toe box; there are a wool tongue and canvas on the heel panel.

You can further notice that the shoe is in some sort of earthy colors like blues and mid-sole. Upon further analysis, you see a TX snap-on patch on the heel; this is atop a white midsole and a gum outsole.

But Air Force 1 isn’t Travis’ only project, besides he has the Jordan Brand, an unreleased “khaki colourway” of the “Cactus Jack Air Jordan 4” and the “Travis Scott x Air Jordan 1” in both the high-top and low-top versions.

We may not have a setfor Air Jordan as yet, but Jordan 1 High collab is reportedly launching in April following a surprise release on the SNKRS app during his Grammys performance this month. These are mere rumors at this stage as neither Nike nor Scott has made things official. More as we have it.