Kids On The Slope Anime Review

Want to understand what it was like back in the 1960s? Ever wanted to leave everything and shake the harsh reality of today’s world? Want to relax and luxuriate in some old music after a hard day? Well, maybe you’ve found Kids on the Slope – a series worthy of taking a position some time into.

Kids On The Slope is a Japanese manga series. Yuki Kodama has written and illustrated it. MAPPA produced an anime adaptation in association with Tezuka Productions in 2012. Its director is Shinichirō Watanabe, with Yoko Kanno’s music.

Kids On The Slope – Author’s Review

Kids on the Slope follow Nishimi, Kaoru. He started a current life in the far countryside of Japan. Karou finds it hard to make meaningful relationships with comrades of his age. Family circumstances make him switch schools often. Due to this unfortunate lifestyle, he felt alienated when meeting new people. He develops “Anxiety Nausea” as a coping mechanism whenever he becomes socially stressed or nervous when people approach him. But when he forms an unexpected friendship with Mukae, Ritsuko, Kawabuchi, and Sentarou, everything changes.

The story incorporates a relaxed and leisurely pace since it isn’t much occurring. But that is okay as it’s about high school jazz players. So you clearly wouldn’t be searching for action here. This is what makes it refreshing. 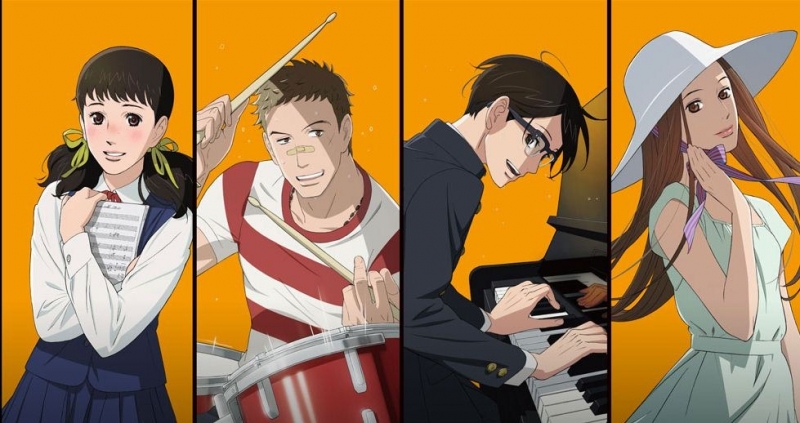 The concept of this slice of life drama was also quite refreshing. The relationship between two males, as opposed to a chiefly romantic relationship, receives the most attention. As for the romance aspect, it had never been the priority focus. It exists in the show in the form of a secondary plot. The intention is to empower the relationships of the protags. Ultimately pointed out as a way to tour the main character’s feelings within.

The characters are all well-defined. Everyone feels astoundingly realistic. Since the cast is limited, every character is given time to develop. They all have layers to them and are more extensive than what their outer personality can be considered.

Sentarou is the most resonant character in the show. You’ll be able to tell this almost right after encountering him. He had a feeling with him, which will compel you to be drawn to his story. And also to the mere bond between Kaoru and him. Voice acting has been exceptionally well. It brings life to the characters and adds a way of realism to them. The supporting characters play an essential role in helping the protag along in their way. They also progress within their own stories in the time they have.

Overall, each character, whether it be main or supporting, they have a unique personality and goals. This is what sets them all apart and yet binds them together.

In This Corner of The World Movie Review