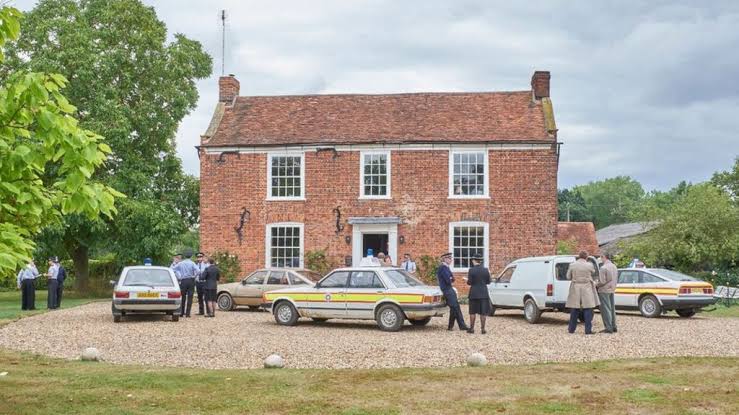 White House Farm is a crime based television series. It is said to be made on the real-life events although nothing in this line of work is completely authentic. Nonetheless, the story is from the 1985 era. HBO Max has recently brought the rights of this series and now they will be streaming it soon. In this post, I’ll be discussing HBO Max other details. Also, spoilers are a major part of this post, this is a quick spoiler warning for all of you who don’t like spoiler content. Without delaying the post any more let us begin discussing the topic.

The genre of White House Farm includes crime, drama, period and mystery. This story is based on the mass murder of a family, Bamger-Caffell family to be precise. When this mass murderer takes place on 06 August 1985 we’ll see how the mystery behind the murder unfolds. At first, one of the members of the family says it was one of the female members named Sheila of the family who was mentally ill, lost her mind and blew everyone up.

Taff Jones and Stan Jones who are two detectives and brothers are put to work on this case. While investigating they find one unsettling news after another regarding this case. So, this series is basically based overall on this incident only. The plot of the series looks pretty interesting and those who are willing to watch this show in the United States of America will be pretty hyped up for its release in the USA if they survive Covid19 pandemic.

White House Farm update of HBO Max will be around December 2020 only but at what exact date it will be released is unknown so far. The original update of White House Farm in the United Kingdom was 08 January 2020. Since then the series has already concluded its first season. It is actually a miniseries. It just has 6 episodes in total. The last of which came out on 12 February 2020.

The show initially had a viewership of 7.99 million views for the first episode in the UK and this gradually increased to 8.67 million views in the UK by the end of the season, meaning that it got more popular as the series went on which is obviously a good thing for the show. Due to Covid19 pandemic, it is possible that the release of White House Farm could be delayed as well but that is highly unlikely because the series is already out there so they don’t have to actually shoot the whole thing again. This will be some positive news for the fans of this show for sure.

Distributor of the show is All3Media. White House Farm was originally released via ITV Hub in the United Kingdom. It was announced in 2019 November that HBO Max has agreed to air the show after this new streaming service will launch on 27 May 2020. So, HBO Max will be the main network which will release it from the United States of America. Now, let us talk about some of the cast details of this show.

These are just some of the important cast members of White House Farm show.

The show overall was pretty popular as the above-mentioned view count suggests pretty clearly. But there were some interesting things that the critics pointed out, as we know that is their job. The casting of the character Stephen Graham as DCI Taff Jones was disliked because this character was Welsh-based and somehow he didn’t know how to speak pure Welsh which was something to take note of. Otherwise, it was a pretty okay thing overall by the looks of it. Let us know your thoughts regarding White House Farm coming to the all-new streaming service HBO Max.