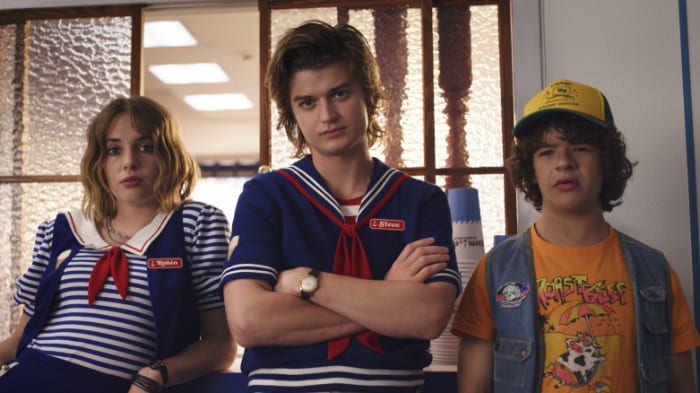 Come on the fourth of July; we’ll get to see Season 3 of the highly acclaimed series Stranger Things. And by the looks of it, there’s just so much going on in the new season of it. The final clip that you see above is about three-minute-long and needless to say, it is action-packed. We see the life of the show, Eleven with her buddies Mike, Will, Dustin, Lucas, Max. They are all grown up, not the same old kids that they once were, which mean, more responsibility and less negligence.

We can hear Mike say that no matter what happens, we’ll stop him together. Will, they won’t they? I think they will. Netflix says that it is 1985 in Hawkins, Indiana, and summer’s heating up. School’s out, there’s a new mall in town, and the kids are on the cusp of adulthood. I have a feeling that Season 3 is going to be coming-of-age Season for Stranger Things kiddies.

There’s the talk of fighting the upside down monsters together, of a budding romance between the friends and that leading to complicated group dynamics. The group will have to figure out how to grow up without growing apart. The new and the old enemies both arrive on the scene, Eleven and her friends are involved in a resolve to stop them. While evil never dies, friendship is always stronger than fear.

Fans have been waiting for over a year now for Season 3 of Stranger Things. Amongst the cast, we’ll see Eleven (Millie Bobby Brown), Mike (Finn Wolfhard), Lucas (Caleb McLaughlin), Max (Sadie Sink), Will (Noah Schnapp) and Dustin (Gaten Matarazzo) back for Season 3.

The episode titles for the third season follow:
“Suzie, Do You Copy?”
“The Mall Rats,”
“The Case of the Missing Lifeguard,”
“The Sauna Test,”
“The Source,”
“The Birthday,”
“The Bite,” and
“The Battle of Starcourt.”

Finally, we are just a day away from the release, and fans are very excited to see the upcoming season. The next season will release on 4 July as we know it, and it will have eight episodes. So get ready to feel that nostalgic feeling, and dive into the 1980s. It will be an experience which we have been asking for, but it would be interesting to see if it meets the expectations of the fans. We know that Eleven had to face a lot in the last season, as she found out her mother, and her sister as well. Not just that, she had to take Will out of Mind Flayer’s control. She did so by using her powers to shut down the way to Upside Down, disconnecting Mind Flayer’s connection to human world.

The plot details of the next season still remain unannounced, but we do know that it will pick up after the previous season’s last moments where saw a silhouette roaming over the school during the Snow Ball dance night. Take a look at the trailer of the next season!