The second season is under development which will conclude the story of the rebel spy Cassian Andor that will eventually lead to the events of Rogue One. The fourth episode of the series, ‘ Aldhani’, was released on 28 September 2022, with its fifth episode waiting to be dropped on the 5th of October.

The character of protagonist Cassian Andor is played by Diego Luna, who was last seen as Andor in the 2016 Rogue One. He was the leader of Rogue One and is also referred to as a hero because of his sacrifice, which secured the Galactic Empire’s Death Star plans at the Battle of Scarif. Syril Karn, portrayed by Kyle Soller, is a human inspector for Pre-Mor’s security services chasing Cassian Andor after he murders two Pre-Mor’s cops. Andor had enemies but also allies.

Andor’s allies were both Bix Caleen and Braxo, played by Adrian Arjona and Joplin Sibtain. Stellan Skarsgard portrayed another important character of Luthen Rael. He was in contact with Caleen and was the one who hired Andor on his first mission as a rebel. The show also stars James McArdle as Timm Karlo, Genevieve O’Reilly as Mon Mothma, Denise Gough as Dedra Meero, and Fiona Shaw as Maarva Andor.

The series is created by Tony Gilroy along with Lucasfilm. The series was written as a spy thriller show focusing on the life of Cassian Andor. The show is categorized as Science Fiction, Action-Adventure, and Spy Thriller.

The story begins with Cassian Andor’s search for his sister. In the first episode titled ‘Kassa’ Cassian Andor travels to Morlana One, an industrial planet, before the battle of Yavin in search of his sister. Cassian is provoked by two Pre-Mor Security officers outside a brothel during his search. Shortly after, Andor accidentally kills one of the security officers and executes the other due to disagreement among them. He then flees to the planet Felix to hide and asks his adopted mother’s droid, B2EMO, and friend Brasso to cover for him.

Andor has in possession the Starpath Unit, which is a valuable piece of imperial navigation technology, he asks his friend Bix for a black market buyer. Bix contacts a black market buyer but fails to hide her connection with Andor, which makes her boyfriend suspicious. On Morlana One, The chief inspector of security tries to cover up the murders, but Syril Karn, his deputy is determined to solve the murder case. 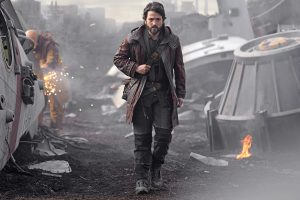 In episode 2 ‘That Would Be Me’ Timm, Bix’s boyfriend, reports Andor to the Pre-Mor security as he is still suspicious of his girlfriend’s relationship. The security service issues a warrant for his arrest, with Syril Karn chasing him. Many things happen simultaneously,  B2EMO informs him about the warrant, which makes him leave the planet while Bix’s buyer reaches Ferrix to take the Starpath unit.

In the next episode, ‘Reckoning,’ the buyer, Rael meets Andor in an abandoned factory. Meanwhile, Karn and his officer Mosk also reach the planet and take his adopted mother, Maarva, in their custody. She refuses to cooperate in any situation. Cassian only wants to sell Starpath to Rael, but Rael persuades him to join the Rebel Alliance.

As soon as they learned that Karn and Mosk were after them, they left the planet immediately. Bix, after coming to know that his boyfriend Timm provided information on Cassian, left to help him but was stopped by the Pre-Mor’s officers, when Timm tries to intervene in the matter, he is killed by them.

In episode 4 ‘Aldhani’ Rael tries to convince Cassian of a robbery of an imperial facility on the planet Aldhani. However, Rael’s crewmates are not happy to see Cassian join the group just before the raid. While the Imperial Security Bureau (ISB) is tracking every movement of Cassian, Rael is secretly meeting with Mon Mothma, who is worried about her position in the ISB.

The fourth episode reintroduces us to Mon Mothma and takes us back to the planet Coruscant which is now the capital planet of the Galactic Empire. Directed by Susanne White and written by Dan Gilroy, episode 4 makes us explore the double lives of Cassian Andor on Coruscant and rebels on Aldhani. To fit in his new pack, he shaved his beard and adopted the name of his father ‘Clem’.

Mon Mothma, the imperial senator, is given deserved screen time in this episode. She meets secretly with Luthen Rael and discusses moving money around, risking her safety as she is been constantly followed by spies disguised as her security. She was in a difficult position when she came to know that her husband Perrin(Alastair Mackenzie) had invited a few of her political rivals and enemies. The visible tension among them makes the series seem like a spy thriller. 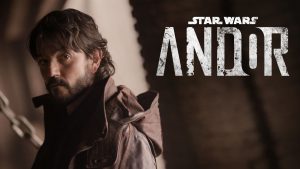 Many characters, including Dedra Meero, portrayed by Denise Gough, are introduced in this episode. Meero is highly interested in the Pre-Mor security incident that occurred on Ferrix. On the other side, Syril Karn is dismissed from his duty and sent back to his mother on Coruscant. Through this, the writers want us to doubt our resentment toward him and empathize with his views.

Talking back about Cassian aka Clem, he is introduced to Vel Sartha (Faye Marsay), a rebel leader on Aldhani. Luthen exposes his double life on Coruscant, where he lives as a well-dressed trader of ancient artifacts in a decorated gallery. He lives as the opposite of what he is. He changes his style from rebellious to rivibrantHe even changes his appearance by carrying a wig. By living so, Rael could bring down the Empire with the help of his connections with influential people.

Episode 4, “Aldhani’ is well-paced but seems like a bridge episode connecting one scene to another. The longer the episodes, the more they tempt us to dive into the politics of Star Wars. We also get to have a glimpse of Mon Mothma’s personal life and her resentment toward the empire. Even without the stormtrooper, Andor feels like Star Wars. It revisits us to Coruscant and impresses us with its political tone. ‘Aldhani’ brings a sense of desperation driven by its lead characters, with many introduced in it.

On a scale of 10, it must be rated 7 as it is not a good watch as compared to the previous three episodes. This was the only episode released last week, while the first three were released at once. Andor is a binge-worthy series. It must be watched when all the episodes are released. Viewing it every week when the episode is released can make the experience boring. To keep up the excitement, it should be watched in one go!