Sports is a very popular genre in anime and has been garnering more and more attention with the likes of Haikyuu!! and Kuroko no Basuke in the mix. But due to these uber-popular anime, there are a few shows that do not get the attention they deserve, and Chihayafuru is one of them. So, Chihayafuru is a sports anime. Interested in what sport they play? *Drumroll*………….. Karuta!

So… What is Karuta you might ask? I did not have an inkling of what it might be when I started watching it. It was just an anime destined to be on my To Watch list for the rest of eternity, completely forgotten. I do not remember why I decided to watch it, but am I glad I did! Also, to the people who might be put off by the Josei tag, please, at least apply the three-episode rule and give it a chance. About Karuta itself, explaining it would be beyond the scope of this review, and the show itself would do a much better job than me, but just for the sake of it, it’s a game in which a poem is read and you have to smack away the corresponding card before your opponent does. More or less. As I said, the show would do a much better job. Also going in without knowing anything about it is part of the fun. You get to learn stuff alongside our extremely likable protagonist, Chihaya Ayase.

The anime is a breath of fresh air in a genre dominated by other, more popular sports. This is also the reason why I’m looking forward to the release of Burning Kabaddi. The setting is simple, Chihaya gets hooked to the game when a new transfer student, Arata, introduces it to her, and Taichi, another kid in class and Chihaya’s best bud, starts playing just because she is too.

The plot, though pretty standard, has some twists and turns along the way. Both Arata and Chihaya are aiming to become Master (Best male player in Japan) and Queen (Best female player in Japan) of Karuta respectively, which by extension, would make them the best in the world(as no other country plays the sport).

Chihayafuru plays elements like suspense and tension to its advantage, and every match is a twist waiting to happen. Every antagonist (if you can call them that) has a different skill and strategy and it is never clear whether our protagonists will win. Stuff like this is exactly why you would be watching sports anime in the first place, and it is beautifully implemented in this show. 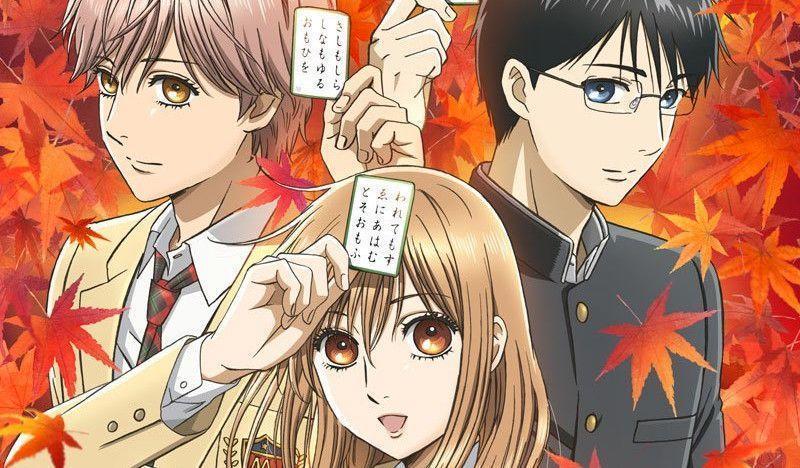 The characters are the strength of any sports anime and Chihayafuru is no different. Every character is quirky, especially Chihaya, and is likable in their way. They have gone even as far as to flesh out even the side characters enough to make one care about them. Everyone has their motivations for sticking with Karuta and with a character roster as widely varying as in this show (charming Taichi to sadistic Sudou, poetry-loving Kana-chan to calculating Nishida), it is admirable that they managed to do it to this degree.

With the Josei tag, comes the promise of a romance. While it is safe to say that Chihayafuru does have romance, it is not advised to watch it solely for that aspect. You will be disappointed. It is mostly downplayed and kept in the background, and this works in its favor considering the characters. Chihaya is a Karuta Baka and is oblivious to virtually everything else other than her beloved sport. There is humor revolving around it too, but it is always just a touch and never overdone.