Wishing to study abroad independently, Sakuranomiya Maika started looking for a job, but due to her creepy-looking face coupled with the sadist character, she was unable to find one. Things changed around when she encountered Dino, an Italian who owns a cafe named Stile. Dino offers Maika a job in his cafe, and she readily accepted it, and thus, a new adventure for Maika starts in her new job.

Breakdown: If you followed Pewdiepie just like us, you already know about Blend S as he used the Blend S opening in his various videos like LWIAY and You Laugh You Lose. But even with some external factors popularizing the anime, the anime is pretty much a famous standalone meme.

The anime takes place in a small coffee shop, Café Stile, run and managed by Dino, an Italian chef who is also an otaku and has a fetish for a Japanese girl with black hair. Unlike other coffee shops in Café Stile, each employee has to show a specific personality to satisfy their customers. Thus we have employees with distinct traits. 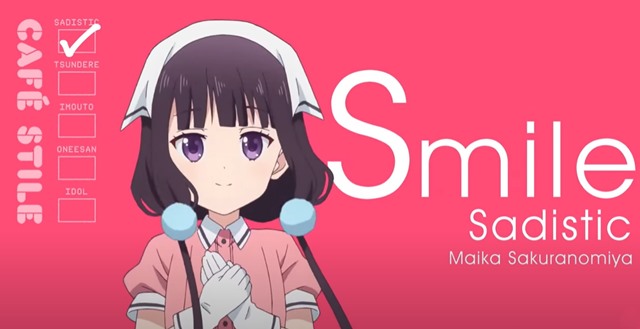 We have Hinata Kaho, the tsundere girl, Miu Amano, who pretends to be an older sister, Hoshikawa Mafuyu, who behaves like a younger sister, Kanzaki Hideri, a trap who pretends to be an idol, and our main protagonist Sakuranomiya Maika who plays the role of a sadist in the shop. Along with this character, there is also a chef in Café Style Akizuki Kouyou, and a dog named Owner, which Miaka found but then later was adopted by Dino.

The anime was delightfully funny, and each person’s characteristics in Café Stile make it even more amusing to watch. The entire anime-only consists of twelve episodes, which is excellent for viewers looking for a short anime series.