The Sweet Story and Animation of Tamako Market

Inside the Usagiyama Shopping District lies an eccentric but close-knit community (Tamako’s Market) of business owners. Tamako Kitashirakawa, a clumsy though adorable teenage girl, belongs to a family of mochi bakers who own a quaint shop called Tama-ya. One day, Tamako stumbles upon a talking bird that presents himself as royalty from a distant land. Dera Mochimazzi, as he calls himself, states that he’s seeking a bride for his country’s prince. Intent on his mission, Dera follows Tamako home and develops an addiction to mochi, becoming painfully overweight and unable to fly back to his homeland; thus, he takes up residence with Tamako’s family and becomes the community’s beloved mascot-MAL.

Slice-of-life shows are generally not as popular as they used to be. This may be due to many reasons, some being the fact that they aren’t included in the “romance” or” comedy” genre. Original shows, on the other hand, which aren’t under the chains of the source material, are generally a hit or miss. Tamako Market, in my opinion, isn’t a perfect slice of life. It has its issues which will be discussed below, but is it worth watching? Let’s find out.

Art is the department that surprised me the most. Kyoto animation is generally known for its stellar art and animation, but unfortunately, they don’t do anything of that scale in Tamako Market. Maybe the decision was taken due to it being a slice of life original, I am not sure. Regardless, it works. The characters were the typical Kyoto moe, and the animation was smooth as well.

The background art, as usual, proves to be one of their strong points. The school and mainly the shopping district. It’s bright, fluffy at times, and has a warm palette to it. There are scenes of absolute brilliance. The way they’ve decided to dull the atmosphere around the district ever so slightly if Tamako isn’t her usual cheery self still catches my eye as it’s too unusual for the district to be gloomy.

Another major aspect of Art is subtlety. Not sure if this was requested from the director or if the decision was taken by the animation directors, but this pulls in the viewers even if they didn’t notice it. 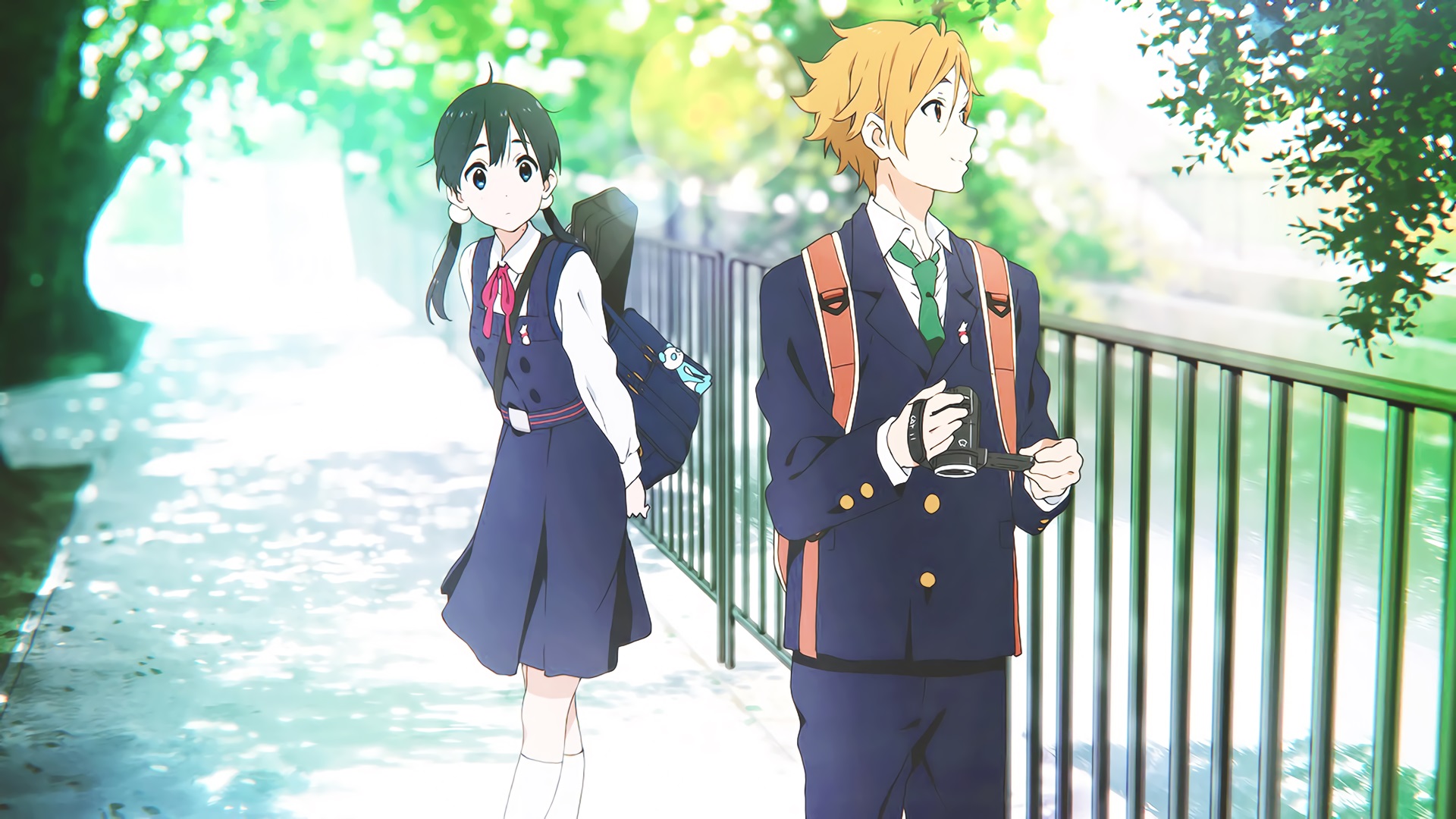 The drawings all around the house on walls, probably by a young Tamako and Anko, really show what a lovely and kind Kitashirakawa household is. This gives a feeling of familiarity and homeliness, which is a major theme of the whole series. The gestures and character movements are fluid, as expected from Kyoto. The entire series has a charm to it that I feel comes majorly from the Art. The district is shown in its entirety as a place of happiness and feels like a place people want to escape to. However, not animation concentrated as its other shows, Kyoto still delivers a warm and heart full animation. For a slice of life, this certainly works.

Tamako Market, in my opinion, is a side story to an even bigger story behind it. It has this element of unbelievable sadness in the background and thus is able to make every happy moment genuinely exhilarating. The story we get, however, is a bird (Dera) coming to the market in search of a princess for a prince. We don’t concentrate on this aspect until the later episodes. This plotline allows the writer to create a story that revolves around the livelihood of the shopping district.

In my opinion, this plotline involving Dera isn’t really required to invent an intricate storyline concerning these characters. They’re all able to hold the fort themselves. Dera serves as comic relief and, yes, is funny most times. There are instances where he falls flat, but it makes it up. It’s hard maintaining such an atmosphere, but other serious moments help later.

The love for the mother is an ever arcing theme prevalent behind the scenes. The fact that she died long ago, but Tamako still gets a flower every day without fail proves this fact. The uniqueness of the Tamako market comes with the characters, and while this will be discussed in depth later, I think a call for episode 9 is needed. Episode 9 serves to be my absolute favorite episode of the series and is heartbreaking equally. The sadness behind the bright and fun cast is finally highlighted. 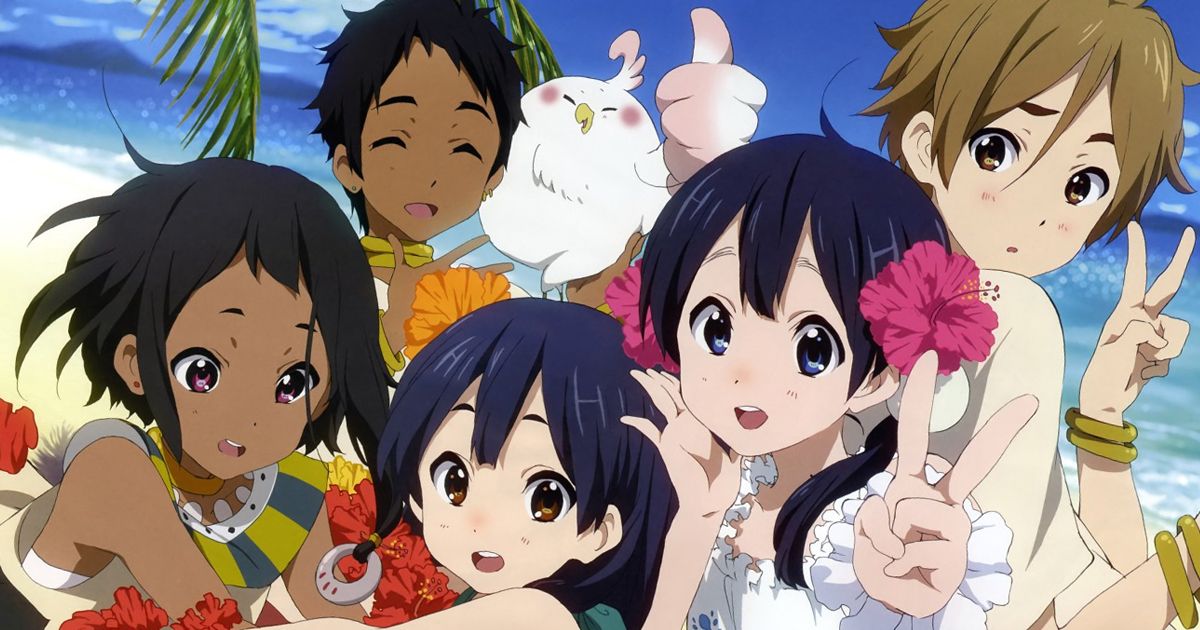 The father is of major importance in the episode. It’s beautiful how they finally introduce us to the mother who passed away. The father being absolutely flushed with every interaction is surprising and endearing to see. It’s funny how a series that concentrates on its comedy can take such a turn. It’s heart-wrenching seeing the dad alone. He sees Hinako now and then when someone passes by. They handled romance in such a beautiful way and left a void in my heart for Tamako and Mochizou. However, we were granted the movie later, which completely concentrated on it.

As I previously mentioned, there are way too elements in this show which make it a good watch. I feel that the team was constraining themselves by using the Dera storyline as the main plot. When the thing about the princess started kicking in later in the series, it wasn’t as exciting as expected. In the end, the only thing pulling the Tamako market was the main plotline.

Minami No Shima No Dera-Chan (Side story)

I really wasn’t a fan of the Prince plotline. While Choi had her cute moments, I don’t think she was developed well enough to have a story of her own. This special side story was a disappointment for me, especially due to the cast. They took away all the elements which made Tamako Market a fun watch. Dera was quirky as usual, but it wasn’t enough to save this side story.