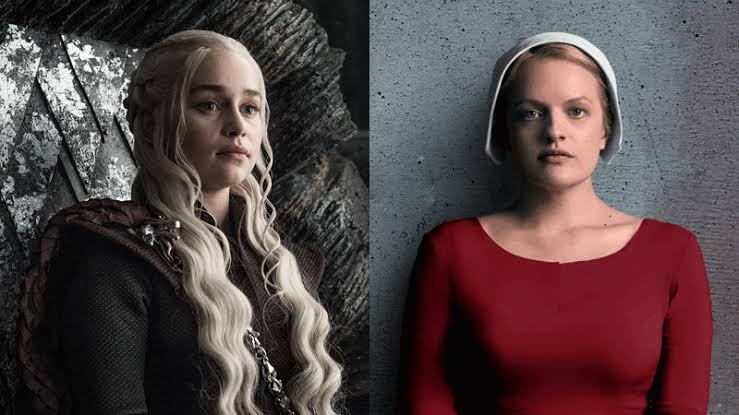 Discussion about GoT And The Handmaid's Tale

Game of Thrones is history now, the show that took the entire world by storm failed to impress its loyal fanatic watchers in the last Season. Fans are getting a similar vibe from The Handmaid’s Tale Season 3, which is currently airing every Wednesdays on Hulu. The similarity here is that both the shows marched to the beat of their own drum, post their source material running out.

Season 5 of Game of Thrones officially marked the departure point, whereby showrunners David Benioff and D.B. Weiss had televised George R.R. Martin’s books. The Handmaid’s Tale, which is an adaptation of Margaret Atwood’s book (minus the 200 years later epilogue) reached the end at season 1itself.

What plagued Game of Thrones Season 7 and eight were rushed plotlines, subverting expectations for the sake of shock value, negative character developments, amongst many others. But let’s get back to the first one, Got was heavily criticized for trying to stitch somehow all the loose plot ends, which eventually proved disastrous for its ratings.

What went wrong with The Handmaid’s Tale?

The Handmaid’s Tale faces quite the opposite problem; fans have been incessantly saying that there is no roadmap for Season 3. From Atwood’s book to episode 10 (promo), what is the show trying to establish? Season 3 has been a struggle to maintain power in the hands of Gilead, the need to establish status quo with the series, The Handmaid’s Tale is treading on water. And it may sink anytime!

Season 2 finale was nail-biting, June promised so much when she decided to stay back in Gilead, after giving her baby Nicole to Emily. “Burn Motherfucker Burn,” read one of the taglines. The other one read “Blessed Be The Fight.”

But where is the goddamn revolution and resistance after all? By Season 2, June had reunited with Hannah, her daughter, who appeared dismal on seeing June. She asked her mother why she hadn’t tried harder to find her. June made a few promises, and it was crystal clear that June would leave no stone unturned to bring down the order at Gilead or the fact that she wouldn’t disappoint Hannah again.

Season 3 chased nebulous plotlines, Waterfords trying to get back in the power elite of Gilead, the diplomatic pressing on Canadian government to return Gilead’s baby Nicole, that eventually went nowhere, awkward scenes between Emily and her ex-lover in Canada, a bit of Aunt Lydia’s story, more hangings, more executions, and June’s stupid attempt to meet Hannah at her school followed by her attempt to slit Serena Joy, before driving Natalie nuts.

The point that I am trying to drive home is that after Martin’s material ran out, Martin provided the writers Benioff and Weiss with key plot beats. This was done to honor Martin and help the two to end the series. The duo ended maligning the reputation of Game of Thrones to an irreparable extent, so much so that fans demanded an entirely new Season 8.

As for June, she is on and on protected by plot armor; showrunner Bruce Miller has confirmed that he’s roughly sketched out about ten seasons of the show. This means a helluva attempt to maintain the status quo on the show, and a disappointment for fans who are fatigued by the plot. Eventually, the Gilead will fall, as in Atwood’s books. But when is that? We hope the show quits beating around the bush before it’s too late.