One Punch Man Finally Revealed The Real Face Of Blast

by Keira Alexandria
in News
0

Finally, after more than a decade since its inception, the One Punch Man series has revealed one of its most anticipated characters: Blast! In the newly released One Punch Man Chapter 135, the number 1 hero has finally arrived at the scene — although not personally. What will this face reveal add in the series overall? Will there be more information that will be shown in the next chapter? How did Amai Mask meet Blast, and where is he now?

In the latest chapter release of One Punch Man, Tatsumaki and Psykos are still fighting. Meanwhile, Drive Knight appeared to join the battle and help Tatsumaki get the upper hand. In addition to this fierce battle, Amai Mask had made his appearance once again after chapters of being not in any panel.

Amai Mask was freaking out when he saw all the injured S-Class heroes looking at him. After all, he seems to have the most injuries among them, which rarely happens since he had always emerged victorious in his battles. Misinterpreting their stares to be judgemental, Amai Mask lost his control and was about to try killing all the S-Class heroes.

Just before Amai Mask commenced on his plan, Iaian kneeled before him and ask if he’s okay. The silhouette of the swordsman reminded Amai Mask of his encounter with the Number One Hero: Blast. In this flashback, Blast was checking if Amai was okay after defeating the monster and rescuing the future A-Class hero. 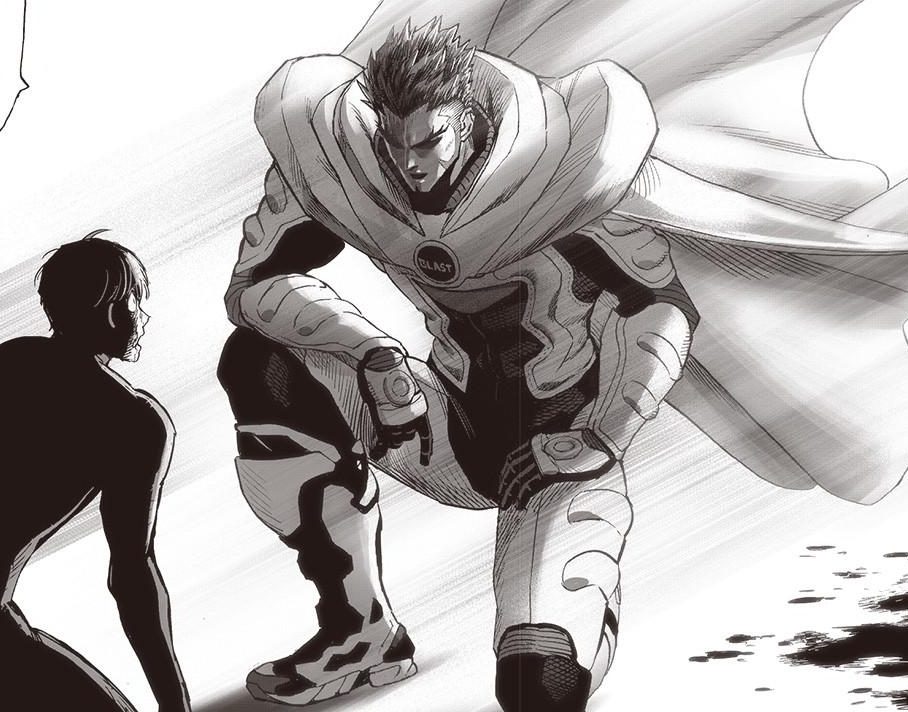 Blast is always being mentioned and seen in flashbacks of heroes that knew him personally. In this chapter, he is also seen in a flashback, but this is the first time that his face appeared clearly in the manga. Donning a cape and metallic suit, the flashback actually helped Amai Mask regain himself.

At the present timeline, there’s still no news about Blast’s whereabouts or if he’s still as powerful as he was years ago. So far, he seems to have met both Amai Mask and Tatsumaki before they become heroes. Hopefully, we can see more of his abilities, as well as how he will fair with Saitama in a fight.