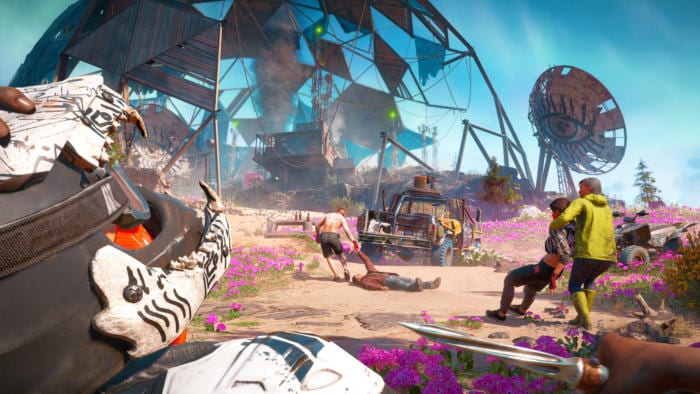 Far Cry 5’s spin-off, Far Cry: New Dawn launched a new trailer yesterday which featured new gameplay and more details on the upcoming spin-off. The thumbnail of the video also had a question which read, “Who will be the new Boomer?’ So, it means that we have a new dog who is going to replace Boomer as our god boy died sometime in between the events of the two-game either from growing old or because of the nuke explosion happen at the last of Far Cry 5.

Now, Far Cry: New Dawn will take place 17 years after the nuke explosion which obliterated Hope Country. It is recovering from its wounds, and Thomas Rush has been giving his utmost efforts to resettle the town, and you will work under him as the Security’s Captain but, things will upside down soon when the twins, Lou and Mickey makes their entrance. As revealed in the trailer, they will try to take control by any means necessary.

So, being forced by the situation, you end up in Prosperity where you aim to rebuild your team with your followers/members in the vast open-world action. Both ‘Fangs For Hire,’ and ‘Guns For Hire,’ will be available as a mission which will let you found new members to join your group. It is also confirmed that both Hurk and Nick Rye will be returning for the upcoming spin-off.

Since it is an open world game, side missions will be available in the entire Prosperity where you’ll rescue others and etc. Doing these will help you uncover the map and win their trust of others to use them and their abilities to your aid when in need. You can get the full details from the gameplay reveal video.

Far Cry: New Dawn will be released on 15th February, and it will be available for PC, PS4 and Xbox One.