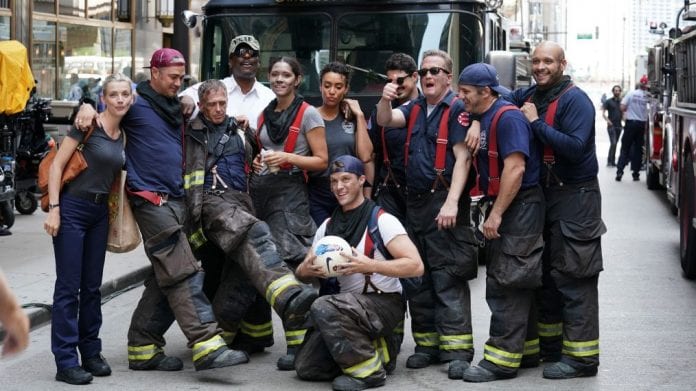 For tonight’s episode of Brett and Foster, some questionable and suspicious circumstances arise, there is an attack at the area surrounding a juvenile detention center. A convoluted new technology at Firehouse 51 tests everybody’s patience. Kidd is chosen to represent the district at a leadership conference. The episode airs tonight on 9 October 2019. The previous episode is titled “A Real Shot in the Arm” and the next episode is titled “Infection, Part I”.

The cast of Chicago Fire includes Sylvie Brett (Kara Killmer), as she makes her way back to Firehouse 51 this week, after friends Stella Kidd (Miranda Rae Mayo) and Emily Foster (Annie Ilonzeh) made the trek to Fowlerton to bring their friend, Sylvie home last week.

In the rest of the show, Firehouse 51 newcomer Blake Gallo (Alberto Rosende) enjoys his first day as a member of 51. You may watch the promo below:

Judging by this promo featured below, Firehouse 51’s newest recruit is having on a hell of a time, eventful first day, to say the least. Gallo is looking to play hero during his first call, to impress everyone. It remains to be seen, whether he’ll be able to pull off another stunning rescue or not.

READ:  Race Across the World Season 2: Release Date, Plot, Cast and What We Know So Far

Tonight’s episode airs at 9 p.m. on NBC. It will be available the next day on NBC.com or Hulu.

What do you think about ” Badlands”? The death of Otis due to a big fire at the end of Season 7 finale was a major shocker, fans still don’t know how to deal with that. We are still grieving and so, we hope that Gallo fits his shoes well.

Sayan Chakraborty - February 19, 2020 0
Shrill is an American Comedy Television series that is streamed on Hulu. It tells the story of a young fat woman, Annie, who takes pride...