A Trailer For Netflix’s “Finding Ohana” Revealed! What To Expect From The New Treasure Hunt Movie!

Treasure hunt as a plot has always been a staple for entertainment media ranging from movies, TV shows, and video-games, or any other type of media. The plot never fails to bore us and has always come in one form or other. The 2010s were similarly filled with a lot of treasure hunt movies coming to our screens, plus with the new trend of big franchise and universe setting movies, the plot has adapted pretty well. With the reboot of the popular Robin William’s Jumanji, which is not technically a treasure hunt but similar in nature, and a live-action adaptation of Dora The Explorer called Dora: The Lost City of Gold, we have to say treasure hunt movies are adapting pretty well to the new environment.

It seems like Netflix has decided to place their own bet in the treasure hunt race with their brand new upcoming movie titled “Finding Ohana,” directed by Jude Weng, along with a script by popular comic book writer Christina Strain. The treasure hunting movie is set to follow two teenagers embarking on a holiday to discover their Hawaiian heritage, only to get involved in a treasure hunting adventure. Netflix has recently dropped a trailer giving the audiences a glimpse into the movie. Here we are breaking down everything we can expect from the upcoming treasure hunt adventure film.

The family adventure movie directed by Jude Weng sees two Brooklyn-raised siblings, Pili, played by Kea Peahu, and Loane, played by Alex Aiono, who are on vacation to pay a visit to their Grandfather in Oahu. When the siblings find about their Grandfather losing their home, they soon discover an old journal that tells them about a hidden treasure, and both embark on an adventure to hunt that treasure down and help their Grandfather secure his home.

Looking at the trailer, both siblings brought up in Brooklyn travel along with their mother to their Grandfather’s home on the Ohau Island and are definitely having a hard time adjusting to the place that lacks an internet connection. Loane, who is disappointed about spending his senior year on an island, soon rejoices once he meets a girl named Hana, for whom he starts trying to build an instant connection as she keeps ignoring him. On the other hand, even Pili befriends a boy named Casper while exploring her Grandfather’s home while sharing a similar interest in treasure hunting.

Upon hearing a conversation between their Grandfather and their Mother only to know that Grandfather is about to lose his home and how he is not ready to let go of it, the scene lights a fire inside Pili’s heart as she becomes more intrigued about her Hawaiin Heritage. She soon tells Casper about a journal which she found while exploring the house and how it reveals a location to a hidden treasure, and both along with Loane and Hana set out on an adventure to look for that treasure that may help them to save their grandfather’s home. 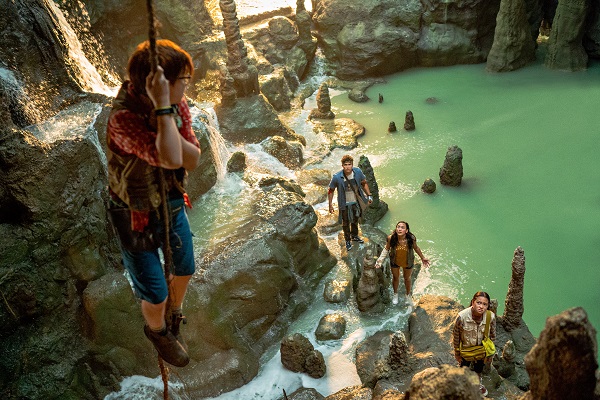 Apart from the whole story told in the trailer, the glimpse from Netflix has given us a wide look into the beauty of Hawaiian Island, which is incredibly appealing in itself. The movie is clearly inspired by 1985’s Steven Spielberg’s The Goonies and hasn’t shied away when they recreate a similar scene from the classic film’s poster.

Read More: New Images, Artifacts, And Keys Revealed From Tom Holland’s Upcoming Uncharted Movie! What Do The Artifacts Say About The Video-Game Based Movie!

Finding Ohana stars Kea Peahu and Alex Aiono as the siblings’ Pili and Loane along with a supporting cast of Kelly Hu as Leilani, Ke Huy Quan as George Phan, Lindsay Watson in the role of Hana (Loane’s love interest), Owen Vaccaro as Casper (the boy Pili befriends). The star cast also includes Marc Evan Jackson, Ricky Garcia as Monks, Ryan Higa as Ryan, Mapuana Makia in the role of Nurse Tina, and Brad Kalilimoku in the role of Kua Kawena, X Mayo as Melody, and Kyndra Sanchez in the role of Yoli.

Finding Ohana is directed by Jude Weng, who is occasionally known for directing episodes of shows like Unbreakable Kimmy Schmidt, The Good Place, and Young Sheldon, along with a script from popular comic book writer  Christina Stain who is known for her work on the Marvel series Runaway. Ian Bryce of Ian Bryce Productions has produced the film, and it’s set to release on Netflix on the 29th of January 2021. 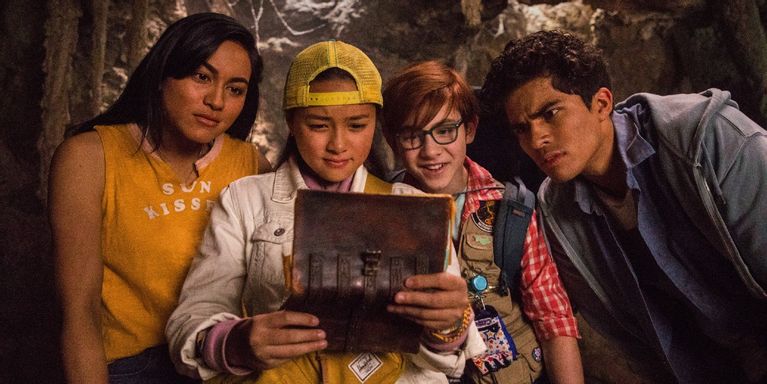 Finding Ohana is just a new addition to already thriving treasure hunt movies, including the likes of the Jumanji Franchise and Dora: The Lost City of Gold. Let’s not forget the upcoming Tom Holland starring Uncharted, which is an adaption of Naughty Dog’s popular treasure hunt game itself. Although these other movies like Uncharted are for adults, Finding Ohana is the perfect movie meant to intrigue children to go on further adventures. For more updates, stay tuned to Otakukart  News.

Related: Will There Be A Last Of Us Part 3? Expectations And Details