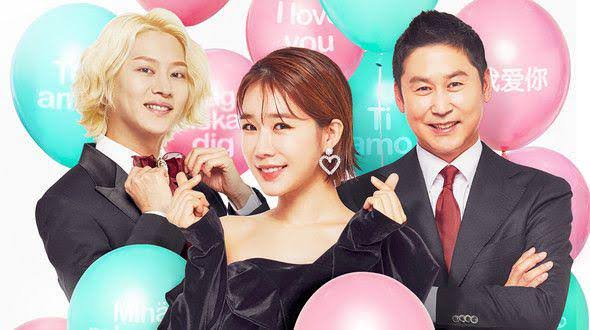 Love of 7.7 Billion Season 2 will be the sequel of the live variety show, ‘Love of 7.7 Billion’ that has just finished airing and gained the favor of a lot of people, owing to the practical and concrete answers it gave for issues people face in relationships. Through non-fictional concerns or cases about people belonging to different countries, the casts share their views on various living styles and cultures and also provide a few suggestions in order to deal with them.

Also known as, ‘7.7 Billion In Love’ the show has been hosted by Shin Dong-yup, Yoo In-na, and Kim Hee-chul. The positive reviews from the people promise a new season for us. So, in this article, we are going to talk about the cast, plot, and other details of Love of 7.7 Billion Season 2.

The participants of the show were divided into two panels of seven, the male panel and the female one. The female section includes Tabea Tenberg from Germany, Angelina Danilova from Russia, Miki from Spain, Oumeyma Fatih from Morocco, Julia Anna Nathalia Barlund from Finland, Haruta Mizuki from Japan and Rose Kizgin from France. As per as the male section is concerned, we had Zhang Yi Wen from China, Zeno Slamet from South Africa, Joseph Detlef Nemelka from the USA, Aancod Abe Zaccarelli from the UK, Joakim Sorensen from Sweden, Maksim Sukhonosik from Russia and Jorge Yahyt Pena Herrera from Colombia.

The second season is expected to have an entirely different cast, to share different opinions. We will have to wait for the show to reveal the details about the cast of season 2.

The second season of Love of 7.7 Billion update is set for Oct-2021, if the show is renewed at all. Although the official renewal announcement is still pending, it will be shocking if the show doesn’t actually have another season, as the show impressed the spectators as well as received good ratings. The first season of the show starting airing from February 10, 2020, on JTBC, every Monday, and the finale episode aired just a few days ago, on April 27, 2020. The show comprised a total of twelve episodes with each episode having a runtime of 90 minutes approximately.

You can watch all the shows on websites like Kissasian and Dramacool along with the English subtitles.

The official promotional video of the second season of the series has not been out yet. However, you can click on the link provided below in order to watch one of the clips of the previous season.

The South Korean talk show, ‘Love of 7.7 Billion’ is a program that lets men and women of the current generation, so as to represent 7.7 billion of people, all over the world, in order to voice their views and experience on love and marriage. They talk about subjects like cohabitation of unmarried couples, international obstacles in dating, world wedding, wishes of the opposite gender, use of a dating application, prenuptial agreement, sex education, and sexual assaults taking place in various countries and remarriages.