Cells At Work is a unique story that visualizes all the cells that work inside a human body. All the daily jobs that they have to do to keep the body healthy. There is the rookie red blood cell, AE3804, and the relentless white blood cell, U-1146 at the center of the story. They are on a journey to fight against germs and other threats to the body. The human body is very complex and difficult to understand, have you ever wanted to know what goes on inside your body, but you are not a big fan of Biology and Anatomy! ‘Cells at Work!’ will take you on an educational spree and you will enjoy it.

This anime is about the world and the people that reside within you. For anime, this show is very accurate regarding the educational content and presents it in a very funny and interesting manner, which keeps you engaged. Even some Japanese doctors and Biology teachers have praised the depiction of cells in the series. The only inaccuracy in the series is how much the particular person’s body seems to have to go through to show off all these various functions reacting within it, which might not be the case with most people.

The concept and the plot of this show, which is quite unusual and new, is what makes it worth watching and also makes it different from the other shows. There is not much of a storyline, but the adventures of the white blood cell and the red blood cell. The way it portrays our body makes it impressive. It makes you realize that our body is a whole different universe with trillions of citizens i.e. cells living in it, which are hard at work every day and night, and also why it is important to take on being healthy. One of the best educational anime shows out there. 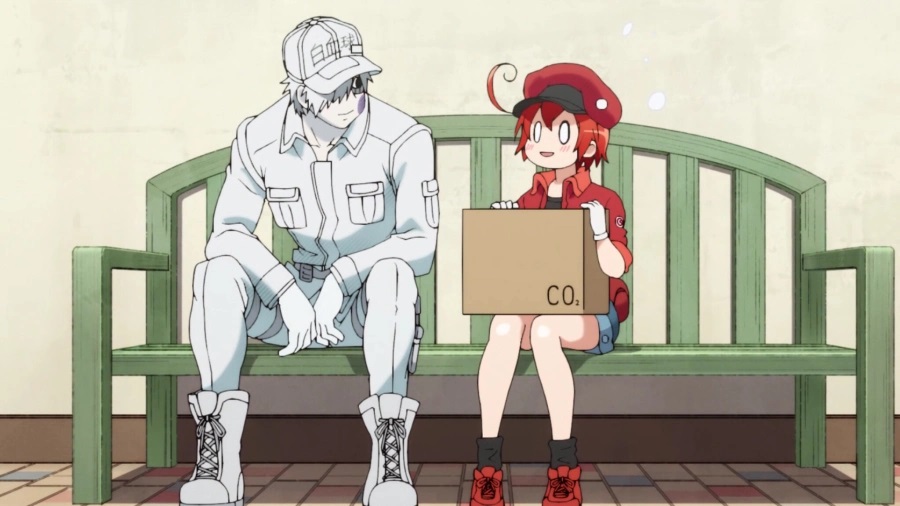 There are many characters in this series; it is obvious since there are 37 trillion cells in the human body! The characters or the different types of cells that reside in the body have been designed very well; they are very likable and are quite accurate for their role. The lead character is a red blood cell, as the exchange of oxygen and carbon dioxide is a very important function that is performed by red blood cells, important enough to have a lead role in anime, also the white blood cells are shown in a very accurate manner, who are generally aggressive and will go to any extent to drive off the bacteria from the body. The character that steals the show is the Platelets, they are designed very accurately just like real-life platelets in the human body which are tiny in size and work on covering the wound. Other characters like the stationary cells, which are the building blocks of the body; different types of T-cells; Macrophage, and the mysterious Basophile.

The Art style and animation, both are good, some of the scenes are finely detailed and most of the fight scenes were good along with the comical nature of animation in funnier moments. Altogether the series looks and flows well.

The opening theme is “Mission! Health Comes First” is sung by the voice actors of the main characters like Kana Hanazawa, Tomoaki Maeno, Daisuke Ono, and Kikuko Inoue in Japanese and Cherami Leigh, Billy Kameez, Robbie Daymond, and Laura Post in English, while the ending theme is “CheerS” by ClariS, which is a Japanese pop duo, Clara and Alice. The series’ music is composed by Kenichiro Suehiro and MAYUKO.

The series is animated by ‘David Production’, is a Japanese animation studio subsidiary of Fuji TV. The studio has worked on projects like ‘JoJo’s Bizarre Adventure: The Animation’ and ‘Fire Force’. Currently, the studio is working on ‘Fire Force season 2’ and the upcoming projects are, ‘Strike Witches: Road to Berlin’ and ‘Cells at work! Season 2’.