Your Lie in April is a series of both manga and anime. A Piano prodigy Kousei Arima dominated the competition, and all child musicians knew his name. But after his mother, who was also his instructor, passed away, he had a mental breakdown while performing at a recital that resulted in him no longer being able to hear the sound of his piano, even though his hearing was perfectly fine. Even two years later, Kousei hasn’t touched the piano and views the world in monotone, and without any flair or color.

He was content living out his life with his good friends, Tsubaki and Watari until, one day, a girl changed everything. Kaori Miyazonois a pretty, free-spirited violinist whose playing style reflects her personality. Kaori helps Kousei return to the music world, and shows that it should be free and mold-breaking, unlike the structured and rigid style Kousei was used to. 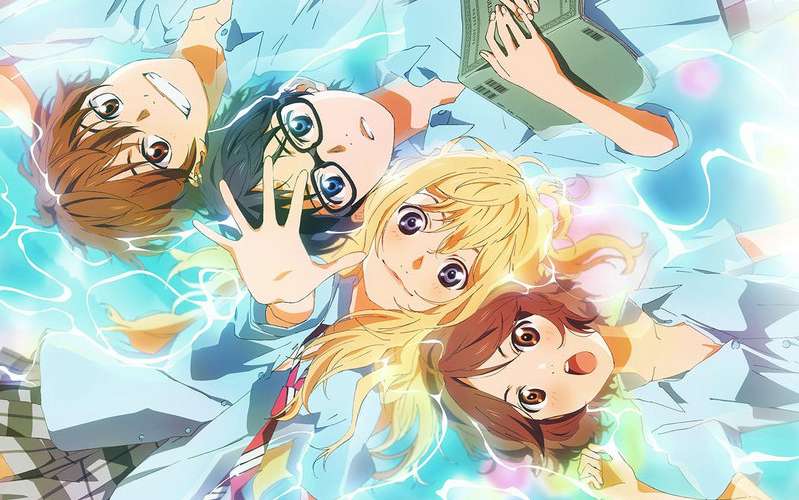 It’s one of the most amazing anime I’ve ever watched. The romance shown in the series is so good and it’s so relatable that after watching it for a while you can’t resist watching it. And if you like instrumental music, Your lie in April may be the perfect anime for you, the struggle of the protagonist is showcased very well and it truly inspires you. The common problem of stage fright and how the protagonist overcomes is shown very well and it gives hope to its viewers some of the moments hit hard and it almost makes you cry the story of each character is portrayed nicely and it feels satisfying.

The romance and chemistry between the characters are so good and feel realistic the one thing I didn’t like about this anime was the ending it was good but not satisfying it could be better. But overall it was a great classic anime and worth watching.